Dirty, viral tricks: The 2016 U.S. election is already getting ugly

To get attention and votes in the 2016 presidential campaign, candidates will need to be more tech-savvy than ever—and ruthless, too 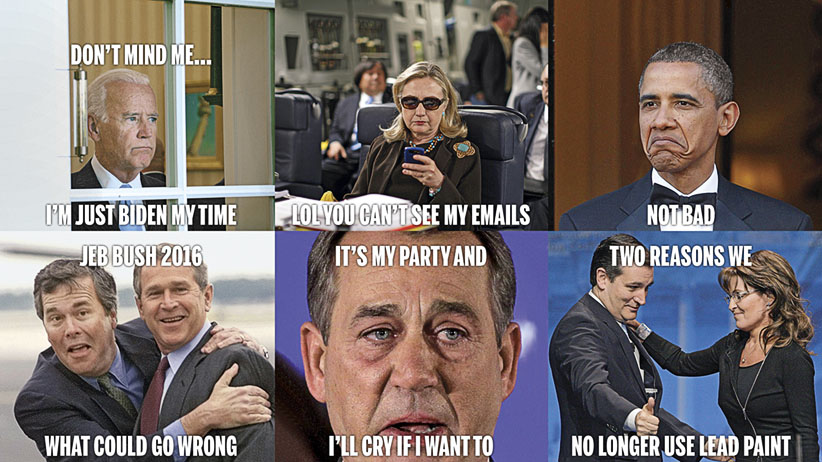 John Boehner, Speaker of the U.S. House of Representatives, wants you to Shake it Off.

In January, in reaction to President Barack Obama’s proposal to make community college tuition free, his office posted a Buzzfeed-style list of Taylor Swift GIFs to pan the idea—she pouts, she shimmies, she applauds to each brief talking point in digital video bites.The Republican Speaker was joined in March by colleagues in the powerful House judiciary committee, who used TV and movie GIFs to react to the President’s immigration policies.

The Republicans don’t have a lock on playing to an online audience. Obama embraced the selfie for Buzzfeed to boost support for his signature health care plan, and recently sat for an interview with GloZell Green, a YouTube star who once filmed herself bathing in Froot Loops and milk. He made headlines a year ago for appearing online on Between Two Ferns with comedian Zach Galifianakis. And he’s brushed off criticism that the antics in any way diminish his office.

It can be jarring to see politicians communicate in GIFs and memes, admits Joel Penney, a professor at Montclair State University’s school of communication and media in New Jersey, who blogs about viral politics. But voters should get used to it. He predicts the trend will only become more widespread as 2016 presidential candidates jockey for attention. “Every time a politician does this, there’s little bit of blowback, but I don’t think that’s going to stop any of this from happening,” he says. “They see the writing on the wall. This is what gets attention right now; this is what gets people to notice you.”

Each American presidential campaign so far this century has embraced some new social media platform. “If 2004 was about Meetup, 2008 was about Facebook and 2012 was about Twitter, 2016 is going to be about Meerkat or something just like it,” Dan Pfeiffer, Obama’s former senior communications adviser, recently wrote, referring to the new live-video streaming tool.

But observers like Penney see things headed in a slightly different direction. He points to the popular Big Bird attack ad against Mitt Romney in 2012, put out by the Obama campaign after the Republican candidate promised to slash funding for PBS: “Big, yellow, a menace to our society. Mitt Romney knows it’s not Wall Street you have to worry about, it’s Sesame Street.”

Says Penney: “We will likely see more attempts from campaigns—as well as their supporters—to meme-ify every perceived misstep of the opposition, which means an endless barrage of online ridicule and mockery. I would predict that the 2016 campaign will easily be the ugliest and most negative in history.”

Americans are more primed than ever for a campaign fought online. Some 66 per cent of social media users have used that platform to engage in politics, such as promoting political issues, encouraging people to vote, expressing their political beliefs or following an elected official, according to the Pew Research Center, which has been compiling statistics on America’s online habits for years. They found that the more ideological the user, the more likely that user is to engage politically on social media.

Candidates have been preparing their war rooms for months. Hillary Clinton has hired a slew of digital gurus who worked with Obama—who had roughly 300 staff in 2012 dedicated to digital—including Teddy Goff, the 29-year-old who ran digital strategy for the Democrats in the last two elections. Republican hopefuls are also siphoning up top talent, with the three official candidates to date—Texas Sen. Ted Cruz, Florida Sen. Marco Rubio and Kentucky Sen. Rand Paul—already duking it out for online buzz. Cruz showed an early edge, leading with 5.7 million Facebook “interactions” in the first 24 hours of his launch, compared to Paul’s 1.9 million, according to data compiled by the National Journal.

Still, Paul, who officially launched his presidential campaign last week, has been making headlines for his digital savvy for months. In January, he sent out a cryptic message to his over 580,000 Twitter followers about a “secret tape of a JebHillary phone call.” The curious were directed to his SoundCloud page and a spoof conversation between Bush and Clinton impersonators arguing over whose dynastic turn it was to be in the White House. It was one of many successful social media stunts for Paul, who’s proven adept at online snark and at inserting himself into conversations about likely rivals in the 2016 sweepstakes from both sides of the aisle.

Harris makes no bones about helping politicians get noticed in what he calls the “24-second news cycle.” “If politicians want to get their news and information delivered to people, they have to be entertaining, they’ve got to be different and they’ve got to be unique with it, and visual,” Harris says. “People are online to watch cat GIFs and to see pictures of Kim Kardashian. They aren’t online to interact with [Prime Minister Stephen] Harper or Obama. That’s just the truth of it, and it’s up to politicians to inject their message into the conversation that’s already occurring.

“Campaigns are going to both generate their own content and piggyback off the energy of online supporters. That’s the kind of thing in 2016 that you’re going to be seeing again, and again, and again,” Harris says, noting that the Paul campaign plans to share and promote content created by the senator’s fans. It is also “unfiltered”—a chance for a politician to bypass mainstream media and speak directly to supporters. (Former vice-presidential candidate Sarah Palin, after a bumpy media reception in 2008, railed against the “lamestream media” and started her own subscription TV channel last year to bypass its “filter.”)

Many political strategists argue that the real value in digital campaigning isn’t found in the social media buzz. Rather, campaign machines are now extremely adept at identifying the voters they need to reach, and reaching them with highly targeted content and advertising. Email fundraising also remains among the most powerful tools available to fill campaign coffers.

But they also agree that going viral is increasingly key. One strategist described it as the “top of the recruiting funnel.” It can grab a voter’s attention in a way that will get him on the campaign’s email list. It helps to rally the base, gets supporters to spread the campaign message through their own networks, and allows campaigns to shape media narratives and appear tech-savvy. Harris argues it also translates into actual votes. “Buzz online equals money online. Money online equals money off-line. Money off-line equals GOTV [get out the vote], which equals votes. This is a very close-knit, tied-together thing.”

Still, for campaigns used to message control, it can be a double-edged sword, says Cyrus Krohn, who directed digital efforts for the Republican National Committee in 2008 and is now with Cheezburger.com, an online hub of Internet culture. “You used to be able to just interact with your five or 10 talking heads who went and did the TV shows, and now you’ve got an infinite number of social-media content creators who are carrying your water in one way, shape or form,” he says. “And how do you herd the cats? How do you coalesce all of these people to help? They’re already very independent and they don’t want to be told what to do. But if the right level of respect and interaction can be constructed, then you’ve built up a cadre of digital advocates who aren’t official members of the campaign.”

So, despite the risks—having your message hijacked, ending up the butt of meme—embracing viral politics is smart strategy. But is it good for democracy? On that, the consensus is: Who knows?

Penney argues it can boost participation in the political process—“sending around funny memes is a lot more interesting than watching the floor of Congress”—but it also encourages the no-holds-barred partisanship that’s come to define American politics.

For Krohn, who says he thrived on introducing humour and fun into politics, it could be seen as either the trivialization of politics or a natural evolution of mass communication. But he adds: “I have a personal perspective on it, which is that it might not ultimately be good for the political process. It’s taking complex topics and making light of them, so you really have to be curious, or study the depth of substance, to actually understand the merits of the argument. If you think you can actually get into the depth of a bill or a position or a policy through a GIF list, we’ve got bigger problems as a society.”