ALLEN ABEL AT THE RNC

The Republican convention kicks off with protests outside, rancour inside—and strange speeches between 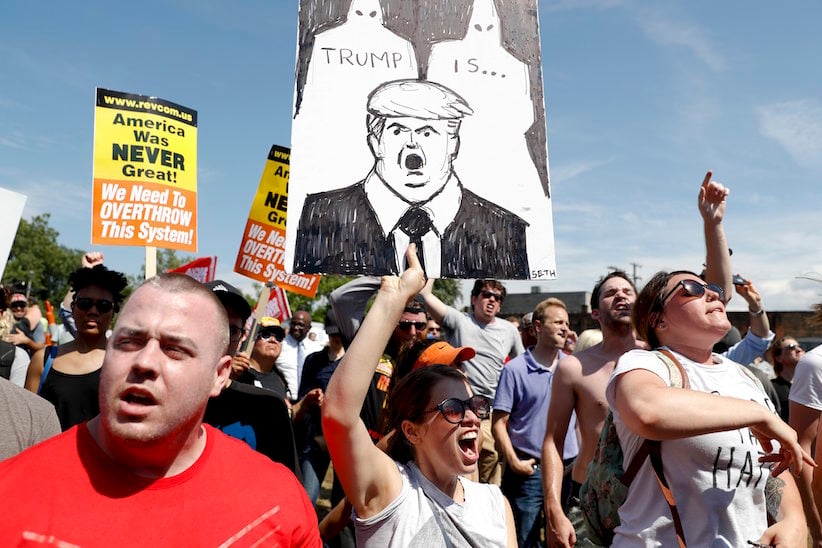 A little before noon on Monday in War Memorial Plaza in downtown Cleveland, with a moist breeze wafting from Lake Erie, as 20 red-shirted young Marxists chanted for the extermination of the rich and one woman screamed “F–k Donald Trump! F–K HIM!” into a bullhorn, the delegates from the great state of Texas started singing “God Bless America.”

There were dozens of them in matching Lone Star blouses and white straw cowboy hats, crooning softly as they queued for the shuttle buses that would convey them through a chain-link labyrinth to the opening session of the Republican National Convention. They pulled back the collars of their shirts and proudly showed the label: MADE IN U.S.A.

“Are you fired up for Donald Trump?” a Maclean’s correspondent asked a woman named Kennedy from Ft. Worth, who was wearing a sparkling brooch that spelled out the name CRUZ in what she wished were real diamonds.

“Down with capitalism!” hollered a chorus of youth, kicking off the “Dump Trump, Say No to the Republican Agenda, Stand against Racist, Anti-immigrant and Anti-Muslim Attacks March.”

“I wish it would rain for all five days,” the Texan lady said, eyeing the dishevelled and aggrieved, but there was hardly a cloud in the sky.

Meanwhile, the man who ghost-wrote the seminal Trump bestseller The Art of the Deal was professing in The New Yorker—after earning jillions of dollars in royalties—that he yearned “with a deep sense of remorse” that he could un-write the whole thing. Paul Ryan, the (Republican!) Speaker of the House of Representatives, was confessing at a Cleveland breakfast that Donald Trump “is not my kind of conservative,” and Sen. Ted Cruz of Texas (and Calgary) himself, still the darling of the Christian Right, was re-re-re-refusing to endorse his own party’s presumptive nominee, smirking to Politico that “what I’m looking forward to is changing the course this country is on. I don’t know if that happens in this election cycle or not,” and blaming the media for painting him as “a whacked-out theocrat.”

MORE: How Trump is splintering the Republicans’ alliance with evangelicals

All in all, then, it was a peaceful morning in the village, except for the lemon-haired monster about to descend from the castle on the hill. 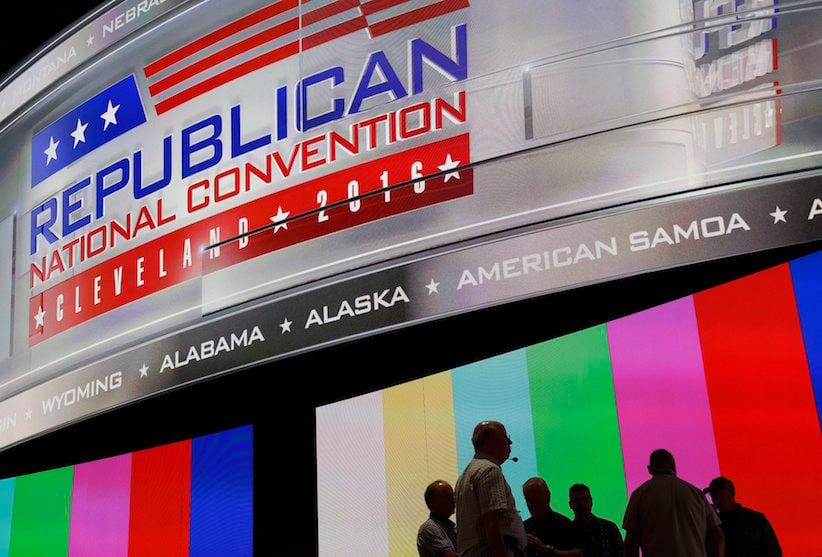 Three blocks from War Memorial Plaza was Quicken Loans Arena, the basketball stadium where, just last month, LeBron James’s Cavaliers won a series-tying game before making Cleveland a city of champions for the first time since Lyndon Johnson was president. Hundreds, if not thousands, of armed police officers stood around its circumference, alert for lone wolves carrying such interdicted items as a water bottle, an umbrella, or a balloon. The mood was serious, but not terrified; there was a sense that the Good Lord had tested the nation with enough horror for one week, and that Cleveland will get through this alive.

Inside the arena, the convention began with the usual boasts by little-known officeholders of the Republican Party’s status as the cradle of immigrants, women, and even immigrant women, and a strange and throbbing invocation of the Donald as a faithful servant of Jesus Christ. A disco ball the size of Uranus hung from the ceiling, awaiting the festivities to come. Then things went a little haywire. 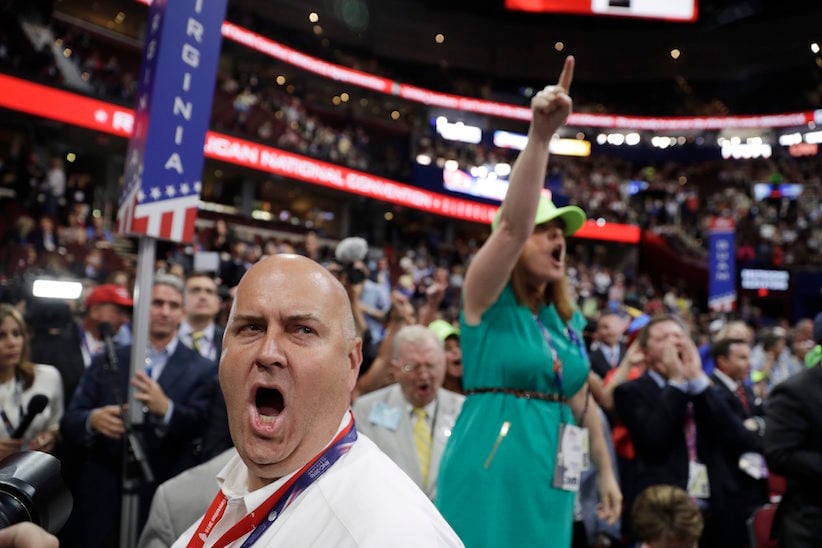 Illinois delegate Christian Gramm, left, and other delegates react as some call for a roll call vote on the adoption of the rules during first day of the Republican National Convention in Cleveland, Monday, July 18, 2016. (AP Photo/John Locher)

Around 4:30 in the afternoon, there was a vote on whether or not to adopt the rules of the convention; rules that, unless amended, would certify Donald Trump’s status as the party’s nominee by compelling delegates to vote in Cleveland according to the results of their states’ primaries and caucuses back home. A congressman from Arkansas named Steve Womack was at the podium, but rebellion was in the air.

The regulations of the Grand Old Party mandate that, to “un-bind” the anti-Trump forces, at least nine delegations would have to agglomerate to force a state-by-state roll call vote rather than a simple acclamation by voice. At one point, 10 or 11 states reportedly had joined forces, but now, Rep. Womack claimed, three of them had recanted under pressure from the party elites.

The Arkansan called for yeas and nays. The resultant din was deafening. Any unbiased auditor would have called it a tie.

“In the opinion of the chair, the ayes have it,” announced Steve Womack.

“Fraud!” cried the maddened thousands. “U! S! A!” bellowed the pro-Trump forces.

“You cannot ignore the delegates!” he hollered into a dead apparatus. “Turn on the microphone!”

Rep. Womack of Arkansas called a brief recess. An entr’acte of over-loud guitars erupted. When the chairman came back, they tried the voice-vote again.

“The chair will remind the hall that is absolutely critical that we be able to discern the yeas from the nays,” Womack pleaded. Again, there was a cannonade of passionate nos. It was impossible to tell whether these came from bona fide delegates, or ringers working at the hot dog stands.

“In the opinion of the chair, the ayes have it,” announced Steve Womack, and he sent everybody home for supper.

“Sour grapes on the part of the anti-Trumpers,” the co-chair of the North Carolina delegation, a man named Jim Hastings from the Great Smoky Mountains, told Maclean’s.

“We’re not here to be pawns in the system,” countered delegate Larry Myers, an attorney from St. George in southern Utah. “We were very upset.”

“I think we’re all big boys and girls,” he answered.

“That was very exciting,” said Fisher, of Georgia. “Almost like a football game!”

At 8 p.m., they all would return for oratory by the star of Duck Dynasty, among others. 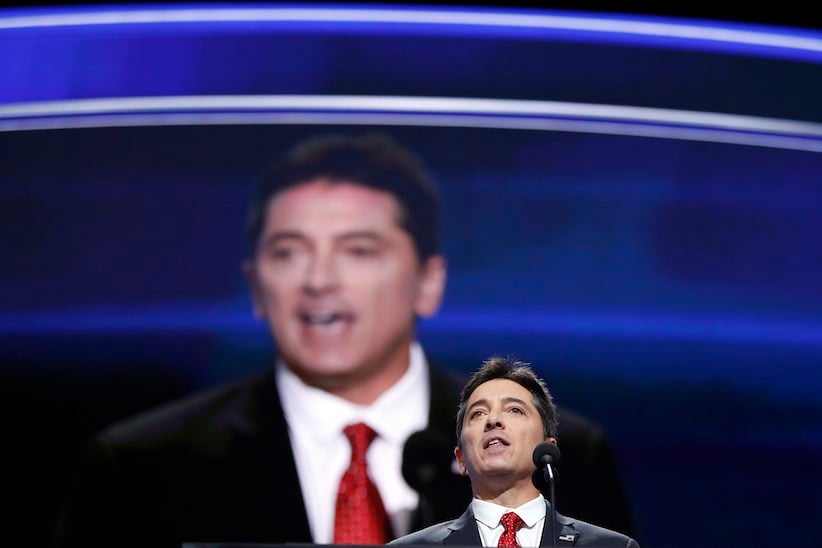 “Is Donald Trump the Messiah?” asked the television actor Scott Baio, as the sun collapsed over the Cuyahoga River with three full days of this sort of thing still to come.

Two hours later, after manifold plaints from the podium decrying American weakness, alien treachery, and Hillary Clinton’s pantsuits—and defying two centuries of tradition, precedent, propriety, and logic—the man himself appeared before a convention that had yet to even place his name in nomination. 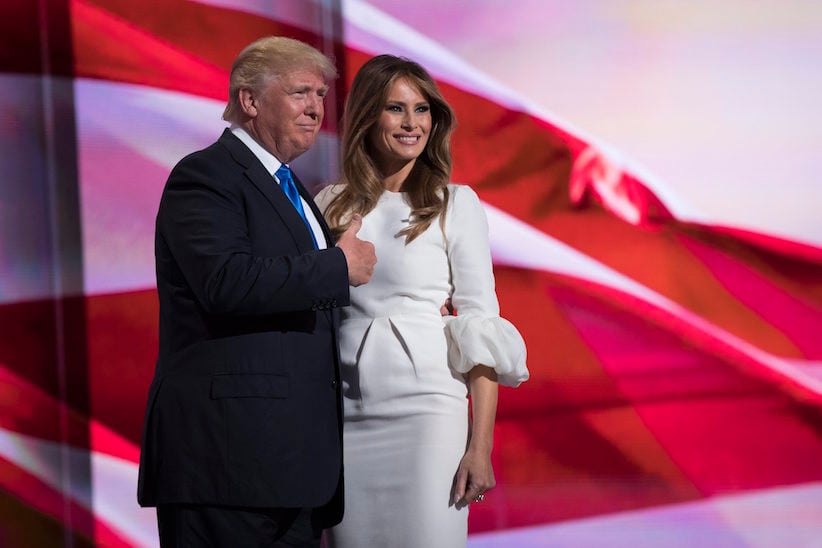 To a hushed and blinking coliseum, with poise and steadiness, the previously silent mother and former model assured the convention of what she called “the simple goodness of the heart that God gave Donald Trump.”

“He can do it better than anybody else, and it won’t even be close,” Melania Trump guaranteed. The arena roared its agreement. And nearly half of the Utah delegation smiled and stood and cheered.