Museum of African-American History: Admission is free. Exit is not.

From 2016: Discrimination isn't ancient history. A Washington museum shows the truth of that. 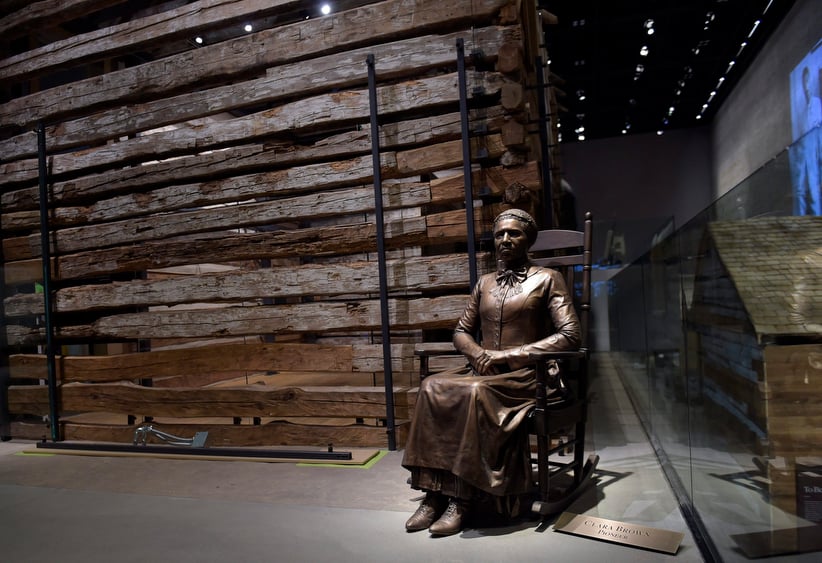 A statue of pioneer Clara Brown, who was born a slave in Virginia around 1800, is on display at the National Museum of African American History and Culture in Washington, Wednesday, Sept. 14, 2016. Brown travelled to Colorado, after she was freed when her slaveowner died in 1856, where she established a successful laundry business. (Susan Walsh/AP)

Clad in dark metal yet even darker within, Washington’s newest and most urgent museum opened its weighted doors last weekend, baptized with the declaration by the nation’s first black President reprising his people’s immemorial plea—that “We’re not a burden on America, or a stain on America, or an object of pity or charity for America. We’re America.” Inside the Smithsonian National Museum of African-American History and Culture were the timbers of sunken slave ships, the rusted shackles of ghosts, and the haunting invocation in the words of an elevator operator who lowered visitors to the hecatomb of their forefathers—to “imagine how many of your ancestors had to perish for you to come here today.”

On Saturday, as cities from North Carolina to Oklahoma seethed in an all-too-familiar pattern of anguish, sorrow, defiance and rage, tens of thousands of bondsmen’s descendants sombrely and proudly inched their way in a kilometre-long queue to reach the angled lattice of the new museum, joined by a conspicuous minority of other races. Above them was the Washington Monument, the obelisk that honours the slaveholder President who won this country’s independence in the name of liberty and equality for the white man. Before them was the Smithsonian’s older repository of mostly Caucasian-American history, whose marble walls had been too small to enfold the awful, inspirational story of the auction block, the lash, and the long crusade for liberation.

And all around them, as they finally made their way down three storeys of breathtaking architecture to a crypt of suffering and sacrifice, were 300 years of unspeakable struggle.

From Nat Turner’s Bible to Chuck Berry’s Cadillac, and from the coffin of a murdered 14-year-old child named Emmett Till—mutilated by vigilantes in Mississippi in 1955 after allegedly whistling at a white woman—to the robe of the champion who dared to call himself Muhammad Ali, the new museum displays and interprets thousands of unique, and achingly ordinary, objects. Dense and troubling at its core, soulful and celebratory at its summit, the newest treasure of the Smithsonian Institution stands out for its filigreed exterior, and for its unfiltered fealty to the ugliest of American truths. 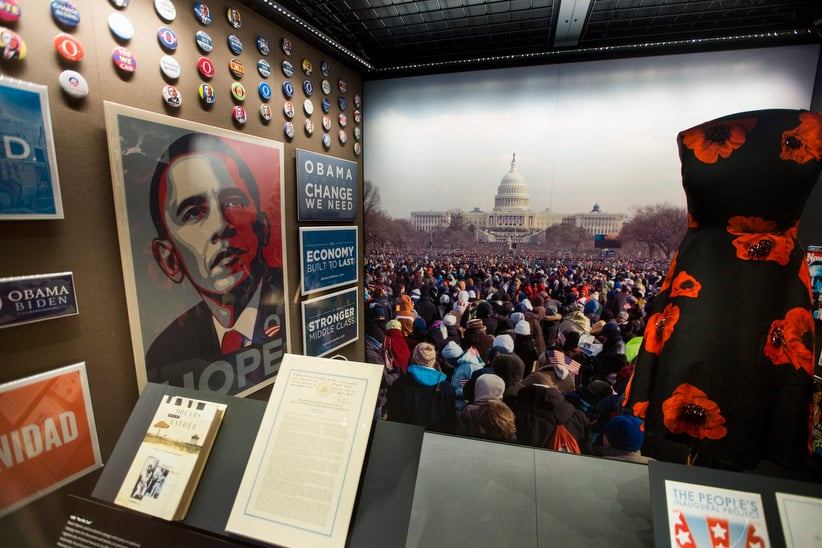 An exhibit on the inauguration of President Barack Obama, shown on display at The National Museum of African American History and Culture during a media preview of the museum in Washington, DC, USA, 14 September 2016. The 400,000-square-foot museum is a Smithsonian Institution museum and will open its doors to the public on 24 September. (Jim Lo Scalzo/EPA)

“Perhaps,” said Barack Obama on the museum portico on opening day, “it can help a white visitor understand the pain and anger of demonstrators in places like Tulsa and Charlotte . . .  It reminds us that routine discrimination and Jim Crow aren’t ancient history, it’s just a blink in the eye of history. It was just yesterday. And so we should not be surprised that not all the healing is done. We shouldn’t despair that it’s not all solved.”

“A great nation does not hide its history,” said George W. Bush, under whose administration was raised the majority of the half-billion dollars that the new museum’s construction consumed. “It faces its flaws and corrects them. This museum tells the truth that a country founded on the promise of liberty held millions in chains.”

Visitors hoping to tour the new museum this fall will be dismayed to learn that all timed-entry tickets have been distributed through the end of 2016. Admission is free, but the price of exit is to wonder whether the United States has progressed at all from 1853, when a Congressman from Indiana named George W. Julian could declare without opposition that “The American people are emphatically a negro-hating people.”

“So much African-American history has been erased, stepped over, or labelled as not in the picture,” Gloria Powell told Maclean’s on opening weekend. She was 85, a retired nurse and nursing educator from Sacramento, Calif., who spent her working life in Harlem.

“Most of the Caucasian population, and a huge section of the African-American population, do not have any idea of our history,” Ms. Powell said. “We were people who were brought here. We didn’t come here to escape religious persecution, we were lifted from our land and our homes and our families. If you become educated about who we are, you will find that you guys no longer need to be afraid of us.” 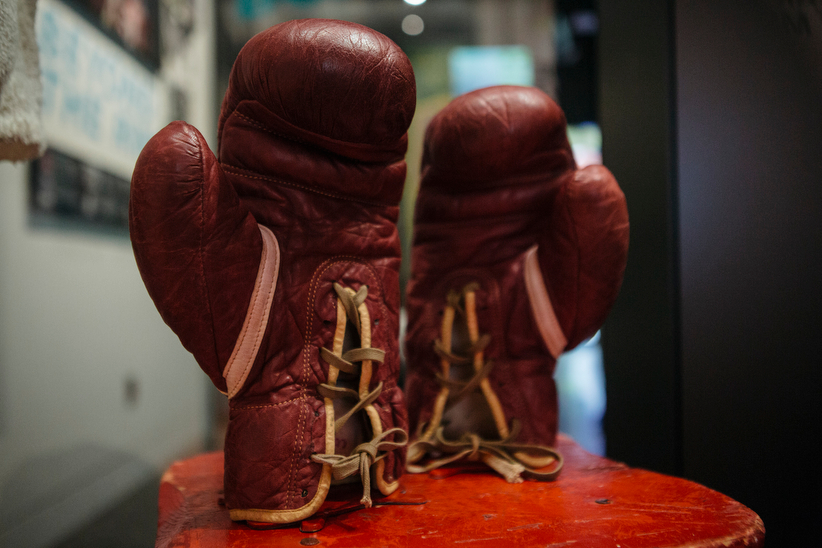 Muhammad Ali’s gloves, one of many artifacts on display at the new National Museum of African American History and Culture, on the National Mall in Washington, Sept. 12, 2016. About 3,500 artifacts will be on display in the opening exhibitions, many of them donated by ordinary people. (Lexey Swall/The New York Times)

But there is another dimension to the opening of the African-American museum, which, like the National Museum of the American Indian a few blocks closer to the U.S. Capitol, advances the fragmentation of the Smithsonian into an archipelago of separate-but-equal edifices a sort of institutional apartheid. Across 14th Street, the National Museum of American History retains only a handful of objects related to African-Americans, including jazzman Dizzy Gillespie’s cantilevered trumpet, a photo of hair-care entrepreneur Madam C.J. Walker, and—removed from all context and potency—a lunch counter from Greensboro, N.C., that once was at the nucleus of the integration struggle.

Backed by such celebrities as Eva Longoria and Emilio Estefan, a commission to study the potential creation of the National Museum of the American Latino has been endorsed by Congress, and a man named Sam Eskenazi, formerly of the (non-Smithsonian) United States Holocaust Memorial Museum, has been lobbying for a decade for a National Museum of the American People to celebrate waves of immigration.

“All the Smithsonian museums are artifact-driven,” Eskenazi told Maclean’s, brandishing endorsements from groups representing dozens of ethnic groups from the Albanians to the Welsh. “My model is story-driven. My museum covers everybody.” 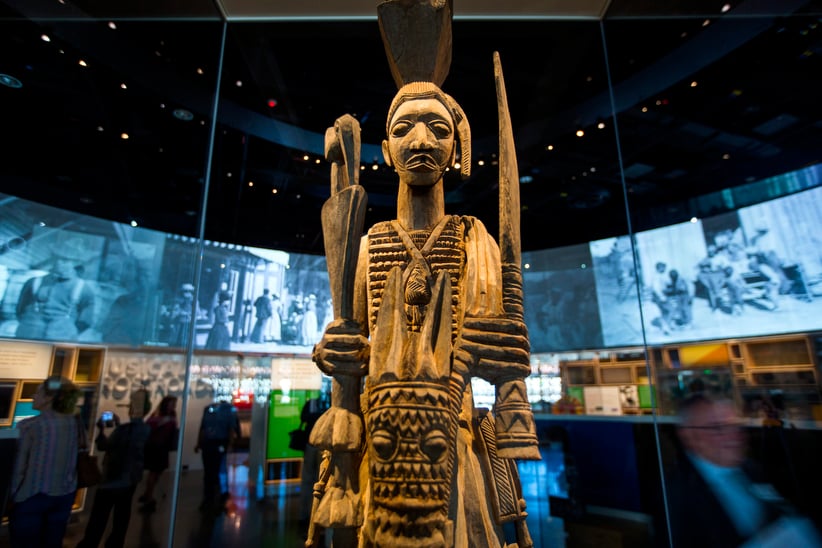 A sculpture by Yoruba artist Olowe of Ise is on display at The National Museum of African American History and Culture during a media preview of the museum in Washington, DC, USA, 14 September 2016. (Jim Lo Scalzo/EPA)

But at the African-American Museum, most visitors found purpose in the segregation of their story from the larger national saga.

“The idea is to educate everyone, black and white, who we are and where we’ve been, not merely that concept of us as someone in blackface with athletic abilities, but as people who have been involved in this country’s story since the beginning,” said Lydia Anderson, who teaches at a Montessori school in the upper-class suburbs of Loudon County, Va. “When you go down to the basement, it puts everything in perspective.

“People say, ‘You black people are in a mess,’ but I say, ‘Look how far we’ve come.’ It makes you want to cry, to see how the slaves put a guard outside the cabin door at night while somebody taught the children how to read. I know the symptoms of racism, but they’re the ones who took the pain.”

Even more painful, Anderson said, was how race was being used as a wedge and a sop by the Republican Party’s candidate for the presidency.

“What this museum says to Donald Trump,” she snapped, “is that you can no longer say [to us]: ‘You got nothing to lose. You’re in bad shape. You’re better off with me. Look there’s my African-American!’

“We are successful people. We are well-educated people. I have a hell of a lot to lose.”