Does Trump's missile strike in Syria set a dangerous precedent?

A leading expert on international law explains why, no matter how awful Assad is, the world should be uneasy 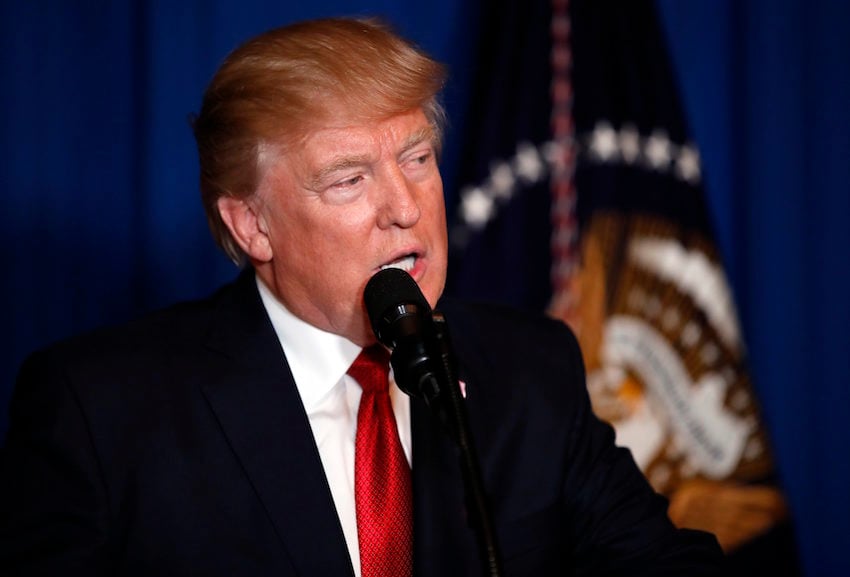 U.S. President Donald Trump’s justification for ordering a cruise missile strike against an air field in Syria was undeniably compelling. Trump cited the horrific images of children killed by a chemical weapons attack that he credibly said was perpetrated by Syria’s notorious Assad regime.

But the implications of the U.S. action go beyond gut reactions to a crime against humanity. Maclean’s spoke with University of Ottawa law professor Craig Forcese, an expert on international law and, in particular, the use of force. The conversation below will also appear in this week’s episode of our politics podcast Maclean’s On The Hill.

Q: I think when anyone says anything that sounds like equivocation about the American strikes in Syria, someone else is bound to imagine that means the human rights abuses—or maybe it’s better to say the crimes against humanity—perpetrated by the Assad regime aren’t being taken seriously enough. So could I start by asking how you reacted to the images of the most recent chemical weapons attack agains civilians in Syria?

A: Well, obviously, those were horrific and they compound the horrific conflict that’s been going on for so long with so many casualties and displacing so many persons. The Syrian conflict is an example of the inadequacies of the international relations environment, but also the shortcomings of international law. International law in many respects grapples poorly with these sorts of scenarios.

But the bottom line is that the international rules are what they are for noble purposes. They’re designed to constrain the circumstances in which states can use force one against the other. And, of course, that’s a great accomplishment of the post-war period. So whenever you have these conversations, you have to keep in mind the bigger picture and story.

TERRY GLAVIN: Our day of reckoning for Syria is coming

Q: I think the question that a lot of Canadians might ask is this: Are the atrocities committed by Bashar al-Assad not in themselves justification for almost any retribution that the U.S. or anyone else wants to mete out? Hasn’t he transgressed enough that we can just say, ‘sure, go ahead and hit him hard as you can?’

The system for war crimes and crimes against humanity, though, is designed around a criminal justice model: there is crime and punishment. The problem, of course, is a scenario like we have at present, where he’s still in power, he’s still exercising control within his state. Then you’re left with fewer remedies in international law. And so the question then becomes: Is this a circumstance where international law allows you to use force against his government and his military within Syria?

And the bottom line is, it’s not. The specific provisions in the charter of the United Nations specify that states are not entitled to use force against the territorial integrity or political independence of another state except in two circumstances. The first circumstance is where the UN Security Council authorizes that use of force. And, in fact, the framers of the UN Charter anticipated that the great powers would constitute themselves on the Security Council, and they would collectively decide when force was appropriate in response to threats to international peace and security.

Q: And Russia, Assad’s ally, sits as a permanent member, so that’s why we know the Security Council wouldn’t authorize military force in this case.

Q: So that rules out the first circumstance when military force would be allowed. What’s the second?

A: Self-defence. States have an inherent right to self-defence, either individual self-defence or collective self-defence. But the trigger there is you have to suffer an armed attack. And, unfortunately, the facts don’t fit the circumstances in Syria. There is no basis to conclude that the use of chemical weapons, or frankly the conduct of Assad generally, has targeted and amounted to armed attack against the United States or any of its allies.

A: It’s an internal conflict, and so we’re left with a conundrum, in the sense that the rules of international law were designed to limit the circumstances where states could use aggressive force one against the other. That was of course the tragedy of the Second World War. Those rules come up short in circumstances where the Security Council is malfunctioning, as it is at present.

Q: What about the so-called responsibility to protect? When the UN General Assembly adopted this principle in 2005, it seemed like it might provide the basis for intervening when the human rights situation inside a country became intolerable to the international community. Why doesn’t that apply here?

A: Sure. Just a little bit of background: This is not the first time this dilemma that we’re encountering with Syria has arisen. In the Kosovo conflict in the 1990s, where Serbia was engaged in crimes against humanity in Kosovo, NATO decided to intervene militarily and in the course of a very lengthy air war essentially forced the Serbian military out of Kosovo. Now the problem was that Serbia had not attacked any NATO members, and the Security Council once again was moribund.

The justification offered by NATO was that, while it was illegal, it was nevertheless legitimate. And so we ended up with this parlance about illegal but legitimate, which is a bit bizarre because usually I assume the two are coincident one with the other. But you couldn’t make the events of the Kosovo conflict square with the rules of public international law. And yet there was such a legitimacy, certainly in the eyes of NATO powers, motivating the use of force that they were prepared to proceed.

Now the problem, of course, is: how do you how do you move forward with such a doctrine? Open the door a crack in terms of relaxing the rules on use of force, and legitimacy is in the eye of the beholder.

Q: Didn’t the responsibility to protect initiative try to put some rules in place so it wasn’t so subjective?

A: That was an effort that was actually sponsored in part by Canada. It was a non-governmental commission that came together and included Michael Ignatieff. They concocted a document called Responsibility to Protect, which essentially tried to codify expectations in terms of the behaviour of states with respect to their own populations. They suggested that where that responsibility to protect had not been met, there could be circumstances where states should be able to intervene in some manner. Now, there were caveats. For example, one of the caveats was that there had to be some reasonable prospect of success.

Q: So why doesn’t responsibility to protect allow the U.S. strike against Syria?

A: The problem was that the scribblings of a private commission do not amount to international law. And so responsibility to protect is an idea that is not yet entrenched. The only way it will become international law is if someone codified a treaty, or if there was enough accrual of state practice—essentially endorsing this doctrine and putting it into play—that someone could say that it’s now international law. We haven’t arrived at that point.

Q: It hasn’t been used at all?

A: A decade ago the Security Council was prepared to say, ‘Why don’t we use the responsibility to protect doctrine as sort of a set of guidelines?’ The only time they managed to do that really was with the Libyan air war in 2011. They did authorize use of force in the Libyan context on humanitarian grounds, and everyone said that was the glorious manifestation of responsibility to protect. Didn’t work out so well right. Libya descended into a failed state. We broke it and then we walked away.

Q: Given all this, what do you see as the consequences of Trump’s missile strike on a Syrian air field, with the support of allies like Prime Minister Justin Trudeau’s government here in Canada? Could the world say, once again, illegal but legitimate, shrug, and move on?

A: I suppose there are two possible categories of repercussions. There are the international relations repercussions. Of course, anyone is in a position to see that there’s a risk of escalation, especially when you have Russian forces on the ground in alliance with the Assad regime. We may end up with a more concerning conflict.

On the legal side, the concern is that you’ve opened Pandora’s box. You relax the strictures on use of force, in this case, for noble purposes. Today, maybe, we’ll agree that this is legitimate. But, tomorrow, perhaps, some other aspiring great power may invoke similar justifications for capricious reasons, and the entire regime of international law, which has been designed to curb aggressive use of force starts, starts to unfurl.

That’s the concern. So it seems to me we need to cabin very closely, and shackle, and basically build a moat, around the reasons this is legitimate. It’s not an open-ended legitimacy to use force whenever you want, but rather in these particular circumstances. If countries are going to say that we’re foursquare with the Americans, and we’re content with what they did, then they have to add caveats. There was a use of a weapon of mass destruction whose use is inherently illegal. This is a government that’s been recalcitrant in the face of other forms of pressure. The attack was entirely proportional and was surgical.

In other words, you’re trying to limit the precedent to these very narrow facts, so that down the road you don’t end up with it being expanded.