10 moments in the Trump vs. Clinton town hall

The stand-out exchanges from the second presidential debate, as the two candidates struggled to grapple with all the chaos on the campaign trail 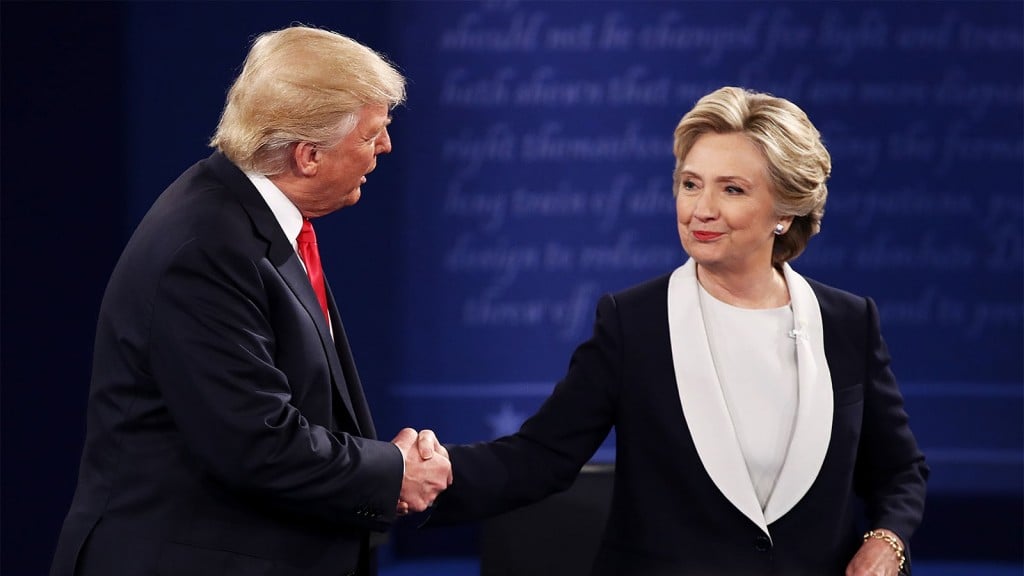 Republican candidate Donald Trump and Democratic nominee Hillary Clinton faced off in St. Louis on Sunday night in the second presidential debate, this one occurring just days after Trump was outed on a decade-old video bragging about sexually attacking women. The revelations brought unprecedented ugliness to a campaign that was already feeling like end-times. Here are some stand-out moments as the two candidates struggled to grapple with it all.

1. ‘You bragged about sexually assaulting women. Do you understand that?’

Anderson Cooper and Martha Raddatz blew previous debate moderators out of the water. Just a few minutes in, Cooper opened the line of questioning that was festering in every viewer’s mind: “You described kissing women without consent and grabbing their genitals. You bragged about sexually assaulting women,” he said. “Do you understand that?” Trump baldly denied it, saying he didn’t say the words everyone heard him say and had unwillingly seared into their brains over the weekend. Then he repeatedly invoked the defence that it was mere “locker room talk.”

As he spoke, Clinton looked down and off to one side, then swallowed once, visibly, like she was trying to compose herself. Trump spun off into an answer about how we’re basically living in medieval times, but he will “knock the hell out of ISIS,” while Clinton stared at him, wide-eyed and frozen. When it was her turn to respond, she took up her microphone and stood, so very wearily. With previous opponents, she has disagreed on many policies and opinions, she recalled, but she never doubted their fitness to lead. “With Donald Trump, it’s different,” she said. “He has said the video doesn’t represent who he is. But I think it’s clear to anyone who heard it that it’s exactly who he is.”

Still in the first 20 minutes of the debate, Trump started to come undone in a way that was physically uncomfortable to witness. First, he pivoted from his boasts about sexual assault to Bill Clinton’s alleged misdeeds, which Trump had taken pains to highlight with a pre-debate press conference. “There’s never been anyone in the history of politics in this nation who has been so abusive to women,” he said of Clinton’s husband. She responded, invoking Michelle Obama’s advice, “When they go low, we go high.” Trump snorted at the idea that the two women were friends, mentioning “some of the most vicious commercials I’ve ever seen” featuring Michelle Obama attacking Clinton when she ran against her husband—which was a campaign Clinton lost fair and square, unlike her primary battle against Bernie Sanders (don’t worry if you missed that glaringly obvious shout-out, Bernie bros, there are about three dozen more of them coming!).

Then, in what was less of a pivot than an ooze, Trump switched immediately to the fact that Clinton needed to apologize for her emails, and, “If I win, I am going to instruct my attorney general to get a special prosecutor to look into your situation.” The grandiosity, realism and forethought in that statement was precisely like a small boy telling you he was sending Superman to your house to beat you up.

3. ‘Before you solve it, you have to say the name’

A Muslim woman in the audience asked the candidates how they would deal with the consequences of Islamophobia, and in an amazing display of diplomacy, she did not ask Trump about his deep and sustained personal contributions to that particular snake-infested well. But then he very helpfully careened through an answer that provided a live demonstration right there on the stage: we gotta be honest, people, we can’t be PC here, there’s something going on, Muslims have a duty to report what they see, etc. Then he lit into Clinton and Barack Obama for refusing to use the term “radical Islamic terror.”

Much like his treatment of the word “stamina” in the last debate—a word no one in the viewing audience will ever again hear without a little shiver of weird—Trump got stuck on the phrase, “Before you solve it, you have to say the name,” repeating it over and over. Perhaps his brain was buffering?

At one point, Cooper asked Trump if he had used claims of enormous business losses to avoid paying personal federal income taxes for years. “Of course I do. Of course I do,” Trump purred. “And so do a lot of her donors.” Then he mentioned—for the third time, by my count—that Sanders said Clinton had bad judgment, and then he just tossed up a word salad of Clinton’s Deadliest Sins: Libya, Syria, Iraq, the genesis of ISIS: ta-da (jazz hands)! When Cooper asked Clinton to respond, she paused for a moment, presumably to shake loose whatever fugue state she had voluntarily entered as a coping mechanism, and then chirped, “Well, here we go again.”

As she spoke about her opposition to garish tax breaks for the wealthy, Trump barked repeatedly about why she didn’t change a thing when she was a senator. “Because there was a Republican president,” Clinton drawled drily. Trump kept on hammering Clinton’s hypocrisy and ineffectiveness until Raddatz said, “Mr. Trump, we’re going to move on,” in the manner of someone explaining to a toddler that they’d be waiting right over here when the child calmed down and felt like putting their pants back on.

A question on the crisis in Syria turned into an answer in which Trump brayed, “Russia is new in terms of nuclear. We are old, we’re tired—we’re exhausted when it comes to nuclear.” In my mind, this baffling non-sequitur morphed into the cover of a glossy home decorating magazine: “Refresh your tired old nuclear program with some kicky throw pillows and printed scarves for SPRING!” Later, Clinton was delivering a detailed answer on what she wanted for the Supreme Court, but Trump was standing in the background, slightly out of focus, leaning on a chair, and I was transfixed by how very much his wee, sweet little fingers really do look like breakfast sausages with the ends snapped off due to freezer burn. This election season is slowly killing us all.

6. ‘You disagree with your running-mate?’

Raddatz asked Trump to explain his strategy for Syria, and he galloped wildly through another field strewn with the ruins of verbs and nouns and conjunctions. “Mr Trump, let me repeat the question,” Raddatz interjected crisply. She reminded him that his running mate, Mike Pence, had argued for using U.S. military force to attack the Assad regime, then asked Trump to clarify his plan. “He and I haven’t spoken,” Trump said with a verbal wave-off. “And I disagree.” “You disagree with your running-mate?” Raddatz asked, and it was less an expression of incredulity than throwing someone a life preserver just to make sure they really want to go it alone with the sharks over there.

7. ‘Believe me, she has tremendous hate in her heart’

An audience member asked the candidates if they would be capable of being a “devoted” leader to all Americans. Trump said he would be a warm, inclusive leader to everyone—special mention to the devastated inner cities, African-Americans and Latinos, but not anyone in favour of NAFTA, for it is the devil. Then he called Clinton out for labelling half of his supporters “deplorables” and contributing in her own way to the divisiveness of an election season that is basically the political embodiment of the smell of burning hair. Clinton said she regretted those words, insisting, “My issue is not with his supporters, it’s with him.” Trump went on to describe the smoking, hyena-patrolled crater that now stands where America once was, then pivoted once more back to his opponent. “Believe me, she has tremendous hate in her heart,” he intoned. Clinton looked off to one and laughed softly, her eyes wild.

Trump was asked a question that juxtaposed his one-time statement that discipline is the most important quality in a leader with his propensity to, oh, I don’t know, send a bunch of enraged tweets in the middle of the night, including one advising the electorate to “check out” a sex tape. “She also sent a tweet out at 3 o’clock in the morning, but I won’t mention that,” Trump said. It was one of several times during the debate that Trump congratulated himself for not mentioning something literally while mentioning it. He went on from there about Benghazi and how Clinton didn’t answer the phone in the middle of the night, or maybe she did and so the moderators were hypocrites for admonishing him about tweeting then, and also social media is a very important modern communication tool and he is “not unproud” of his considerable following. Cooper turned to Clinton: “Secretary Clinton, does Mr. Trump have the discipline to be a leader?” he asked. “No,” Clinton said flatly. The audience roared, but no one high-fived, even though it kind of felt like that sort of a set-up.

9. ‘Very beautifully reviewed by just about everybody’

On a question about what they would look for in Supreme Court justices, Trump said he wanted judges in the mould of the late Antonin Scalia and he’d already picked 20 candidates who have been “very beautifully reviewed by just about everybody.” This highlights an odd verbal tic of Trump’s: mostly, his verbiage is the linguistic equivalent of an Ed Hardy shirt doused in Red Bull and set on fire. But he’s also prone to weirdly soft, effete adjectives that somehow only end up sounding more aggressive, like if you set that shirt on fire and filmed it accompanied by a soundtrack of an English private-school boys’ choir.

The most uncomfortable moment of the debate arrived with the very last question, in which an audience member asked the candidates to name one positive thing they respect in the other. The audience, when they heard this, laughed and applauded like a pack of sadistic trained seals. Clinton went for the obvious answer: Trump’s children. They are capable and devoted to him, she said, and that says a lot about him. “I don’t agree with nearly anything else he says or does, but I do respect that and that is something that as a mother and grandmother is very important to me,” she said. When it was his turn, Trump preened over that “very nice compliment” for just two beats longer than he strictly needed to, then offered up his own praise for Clinton. “I will say this about Hillary: she doesn’t quit, she doesn’t give up,” he said. “I tell it like it is: she’s a fighter.”

With one more presidential debate and a month to go until Election Day, the rest of us are going to have to gird our loins and pray for similar familial support and personal fortitude.