One photo, less than 1,000 words: How hockey's association with politics changed around the same time Trump's did 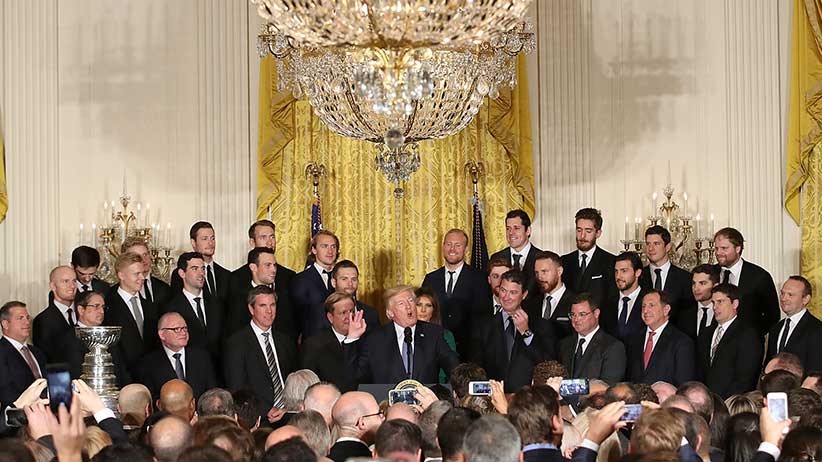 WASHINGTON, DC – OCTOBER 10: U.S. President Donald Trump speaks at an event honoring the National Hockey League champion Pittsburgh Penguins in the East Room of the White House October 10, 2017 in Washington, DC. The Penguins defeated the Nashville Predators in the 2017 NHL Finals, the fifth time the franchise has won the Stanley Cup. (Photo by Win McNamee/Getty Images)

Back in January 2012, Barack Obama was wrapping up his first term as President of the United States, and the Boston Bruins were planning a trip to the White House. The Bruins had won the Stanley Cup the previous spring, and Obama was planning—as presidents do—to formally fete their success. But Tim Thomas, the Bruins’ star goaltender, refused to go.

“I believe the Federal government has grown out of control, threatening the Rights, Liberties, and Property of the People,” Thomas wrote in a statement explaining his absence that day. “This is being done at the Executive, Legislative, and Judicial level. This is in direct opposition to the Constitution and the Founding Fathers vision for the Federal government.”

RELATED: The day the Penguins stood with Trump

Hockey’s role in politics, especially in Canada, has historically been one of either analogy or cliché. And when it does act as a focal point of a broader political discussion—say, about what you can wear to a riot, or how much a city ought to spend on a stadium—the game itself, and its actors, are rarely part of the conversation. Hockey players have been mostly expected to play hockey and talk about hockey and that’s that.

This appears to be, in essence, how Pittsburgh Penguins’ captain Sidney Crosby approached his Stanley Cup-winning team’s visit to the White House this year. “It’s not about politics,” he said, trying to explain his attendance ahead of Tuesday’s photo op. That was once true, and few hockey players beyond Tim Thomas have ever apparently felt otherwise.

WATCH: Penguins Coach Mike Sullivan on the right to protest

Unfortunately for Sid, visiting the White House is always a political decision to some degree, and athletes—if they were ever immune from that kind of scrutiny—no longer have the luxury of even pretending it isn’t. Whether or not the visit on Tuesday was about politics wasn’t Crosby’s decision to make. Donald Trump all but settled the matter in the weeks leading up to the gathering, engaging as he has in his bizarrely petulant reaction to NFL players protesting against racial injustice or trying to disinvite another champion, NBA star Steph Curry, from his team’s visit.

But maybe the nature of the Penguins’ visit was decided long before even Trump’s latest foray began.

Maybe hockey’s political destiny changed around the same time as it appears it did for the rest of America, sometime around 2012 or so, when the phrase Tim Thomas had painted on his goalie mask—”Don’t Tread On Me”—started being interpreted in a new way by an increasingly aggravated cohort of voters during a presidency they felt was hurtling the nation in the wrong direction, steered by a president who people like Donald Trump believed was himself an illegitimate candidate for the job.

Looking back, maybe Tim Thomas wasn’t the outlier he appeared to be. Maybe he was just a sign of what was to come.