Scenes of U.S. campaign: A bid for history meets democracy as reality TV 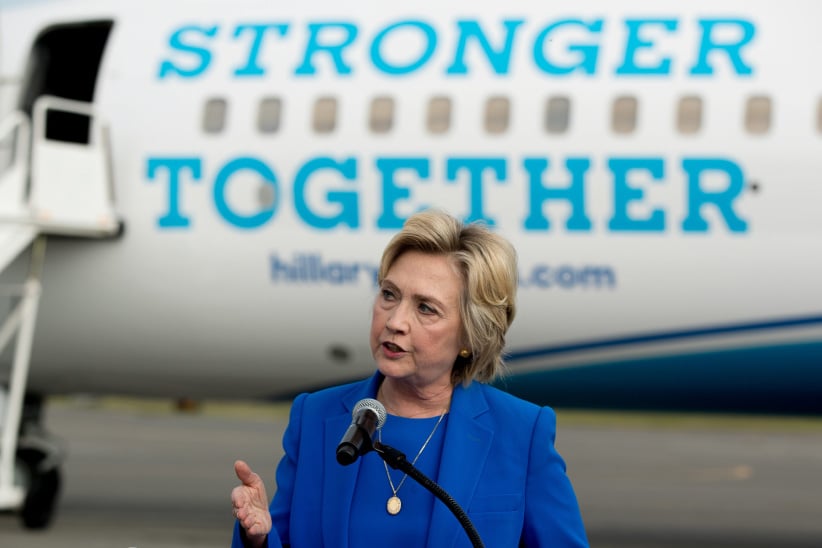 WASHINGTON — Hillary Clinton’s voice was being drowned out at her own rally. A murmur rippled through the overflow area, the supporters watching her speech from a nearby screen.

The commotion: a guy in a Donald Trump costume.

People were swarming the fake Trump for selfies during a Clinton event at a Florida college. Amid the babble, one woman shouted in annoyance, “We’re trying to listen!”

It was a rough year for that.

Tuesday’s election concludes a campaign where Clinton’s history-seeking bid to become the first female president was overshadowed by a carnival of cringe-inducing moments: sordid sex allegations, FBI investigations, emails, Russian hackers and a billionaire showman who turned American democracy into a reality-TV contest.

Clinton’s team reached its conclusion early: this election would be about him. Last spring, network cameras spent a half-hour airing live footage of an empty stage where Trump was about to speak — while Clinton was actually speaking elsewhere.

Ask Americans to descibe Clinton’s campaign message — prepare for blank stares. In one interview, she cited the influence of “Our Kids,” Robert Putnam’s sweeping survey of an America shattering into isolated social classes, where one generation’s wealth increasingly determines whether the next gets a good school, a healthy lifestyle, even infant interaction that stimulates neural development.

She wrestled with the slogan — 85 different options, according to Wikileaks, before her team settled on “Stronger Together,” a platform that demands the U.S. join other developed countries in providing parental leave, offer tuition-free public college, and create tax incentives for companies to share profits with workers.

He poisoned his poll numbers with women and minorities, making remarks that thrilled race-baiting Internet trolls and the Ku Klux Klansmen who championed him across their latest newspaper front.

But Trump rattled the right cages. Primary voters wanted to shake their party establishment. They also enjoyed the show, lining up for hours at rallies and delivering record-smashing TV ratings for the most unpredictable entertainer in politics.

One early supporter kept bursting out in belly laughs at a rally before the New Hampshire primary. With each guffaw, Chip Paquette elbowed his neighbour to make sure he’d gotten the joke.

He howled in faux-shock when Trump dropped a four-letter word.

He was fine with banning every Muslim travelling to the U.S. — Trump’s stated policy, for a while. Paquette knows Muslims, and they’re nice. But he said the country needs to get tough. A retired cop, Paquette wistfully recalled that he used to be able to punch a suspect and, back then, nobody complained.

Now there are fewer people, unions, and Democrats.

A county coroner predicted Democrats would get buried in these Appalachian foothills: “Trump will win the state of Pennsylvania,” said David Gabauer, elected coroner last year as Republicans won Beaver County for the first time in six decades.

He couldn’t point to any one issue: “It’s (Trump’s) attitude.”

Some here are skeptical, including Jack Manning, the head of the local chamber of commerce, who has a detailed plan to diversify the area’s steel-based economy. Trump is promising jobs that no longer exist, says Manning _ they’ve been mostly automated.

While attempting to explain Trump’s appeal, one area official pauses, ensures a reporter’s recorder is off, and says: “Part of it’s racism.” He says he knows people who never accepted having a black president. They now see Democrats as the ethnic-minority party.

”I’ve said … 25 to 30 per cent of the anti-Obama vote around here was based on race. I’d say that’s the minimum. It might be higher,“ said J.D. Prose, who writes for regional newspapers.

”I don’t know how much race is a factor in this election, though Clinton is seen as an extension of Obama.”

Much of American politics is actually a subliminal conversation about race, Ian Haney Lopez argues in his book, “Dog Whistle Politics.” He describes how, after segregation ended in the 1960s, politicians started talking about welfare, prison sentences, the drug war, as a wink to working-class white voters.

Race pops up in unpredictable places.

Sources within the FBI kept leaking to some news outlets that detectives were being stymied while probing possible corruption at the Clinton Foundation. Media reports and Wikileaks pointed to a slew of conflicts-of-interest. But another police source told The Guardian many agents were biased: “The FBI is Trumpland.”

This internal feud was somehow related to Black Lives Matter, according to another report. The Washington Post described an intra-agency battle, with New York agents furious at Washington officials for urging charges in Eric Garner’s police-related death.

Six police officers were shot in Baton Rouge the day before it started. In his convention speech, Trump resurrected a phrase used by Richard Nixon and segregationist George Wallace as they competed for white southern votes in 1968: “Law and order.”

It was a deliberate choice.

Before the speech, Trump’s since-departed campaign manager, Paul Manafort, said he was inspired by Nixon’s convention address. Trump also promised to bring back the jobs of 1968 _ in steel, coal, and other manufacturing.

“I have visited the laid-off factory workers, and the communities crushed by our horrible and unfair trade deals,” he said. “I am your voice.”

That message of economic nationalism stirred noisy passions. Motorcycles rumbled into a rally of bikers for Trump last month in Florida, where speakers complained about politicians who sold out workers to foreigners _ they specifically mentioned the Chinese and Arabs.

One leather-vested speaker pulled a middle finger while referring to Paul Ryan, the top congressional Republican. That animus against the political establishment isn’t likely disappearing after Tuesday.

The Republicans’ county chair got weepy-eyed at the rally. His hand on his heart, Bob Sutton welled up during the national anthem. He fears for the country, fretting about socialism killing the free-market system.

Others see a different story unfolding.

It’s about a country always innovating and reinventing. Even at the Republican convention, as Trump lamented the demise of old jobs, kids at a nearby kiosk were demonstrating new technology: artificial intelligence, facial-recognition software which guessed the age and mood of passersby, and a 3D printer turning wax into convention buttons.

More Americans are attending college. Women now outnumber men there. Visible minorities are increasingly present. The Latino percentage of postsecondary students has almost tripled since 1990, while African-Americans’ share is up more than half.

Together, these groups form an increasingly potent electoral coalition.

Nancy Osores just joined its ranks, rushing to cast her ballot on Day One of advance voting. It was her first vote since immigrating from Peru. While she works the dough in a pizzeria, her daughter works an IT system.

She offered a thumbs up while leaving the Miami polling station.

Osores revealed how she’d voted: “Against him — (and) happy.”

The next could belong to his opponent, to the frustrations that fuelled him or to the coalition fighting him _ the women, minorities, and the college-educated, an alliance of people less prone to pining for the past, still reaching up, and touching the fruits of a country sowed in the soil of life, liberty and the pursuit of happiness.