Donald Trump at the Bat

Allen Abel abandons the Supreme Court confirmation hearing for some baseball, where the only filibuster is an extra inning 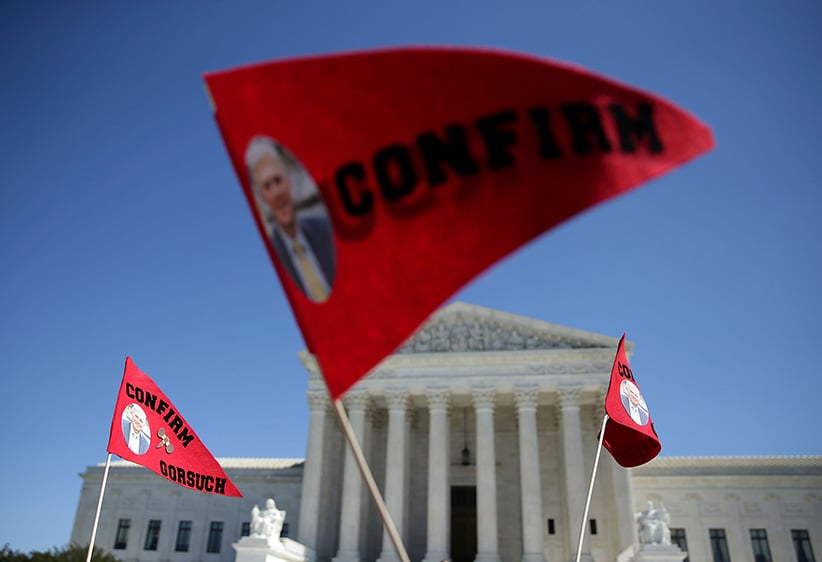 The outlook wasn’t brilliant for The Donald’s nine Monday.
(By nine we mean the Supreme Court, where only eight now play.)
And when a hearing opened to confirm the newest judge,
The Democrats with smug disdain refused to even budge.

The setting was a stately room in august Senate stone.
Where members from both parties came to preen and preach and drone.
The battle lines were clearly drawn by men named Chuck and Mitch,
Who claim to serve the common man, though both are filthy rich.

The nation was divided as the Monday vote commenced.
There was no place for anyone to sit upon the fence.
Conservatives were eager to dispel the left-wing stench:
“We’ll kiss goodbye to Roe v. Wade with Gorsuch on the bench.”

But now the Senate Democrats demanded time to speak.
And vowed to drag the process through at least another week.
The dreaded filibuster was the weapon they would choose
To claim a Pyrrhic victory, though they were sure to lose.

First, California’s Feinstein tore into the nominee:
“He favours waterboading and that’s torture,” argued she.
And Minnesota’s Franken, formerly of SNL,
Declared that confirmation would unlock the gates of hell.

Leahy of Vermont went further: “What a shameful stain,”
He said, and then Whitehouse of miniscule Rhode Island would complain
That Senate confirmation, should it finally arrive,
Will turn the Supreme Court into “a right-wing gang of five.”

It went on like this for hours; to defend or to defame
The SCOTUS nominee was just a token in the game ­
The cynic’s game of power in the body politic
Of which, electing Trump, the masses showed that they were sick.

So, fed up with this pageant of fake anger and disdain
We went to see the first game of the Nationals’ campaign.
The ballpark’s where the Supreme Court of umps is never wrong,
And there isn’t any pretense that both teams should get along.

In baseball, things have hardly changed since 1869,
And we know that today’s enmity will fade away in time.
The fans respect and love the diamond’s greatest stars by name,
And the only filibuster is an extra-inning game.

Now, forty thousand wondered who would get the sacred call
To inaugurate the opener by tossing out the ball.
In seasons past, the President would make this beaming play:
From Taft to Eisenhower, FDR to JFK.

But the hallowed box was empty, and all the fans did scoff:
Afraid of raucous booing, Mighty Donald had begged off.
Instead, five military members took the mound,
And the cheering of the masses to the heavens did resound.

(It turned out that our brave Commander really had been busy,
Tied up in lunch and meetings with Abdel Fattah Al-Sisi.
Though some suspected Trump would rather have a midday nap,
And never could find Egypt on a world Mercator map.)

On the hill for us was Strasburg, who will, with 30 starts,
Earn more than Trump will cut from the Endowment for the Arts.
And for Miami, on the bench, the Marlins’ boss could choose
Great Ichiro, who’s almost old as Rubio and Cruz.

In Washington, there is one man whom all the fans adore,
A bearded boy who proudly wears the number 34.
This is the slugger whom we all are happy to believe in,
A Harper out in deep right field whose first name isn’t Stephen.

There were Nats on first and second when Bryce Harper came to bat,
But a called strike three embarrassingly put an end to that.
Two innings later, here he was again with greater heft,
But all the hero managed was a feeble fly to left.

Then, deep in the sixth inning, with two out and no one on,
Bryce blasts the ball to centre, and it’s going, going gone!
The moral is that 0-for-2 is just a little slump.
In baseball, there’s forgiveness. Wish we could say the same for Trump.