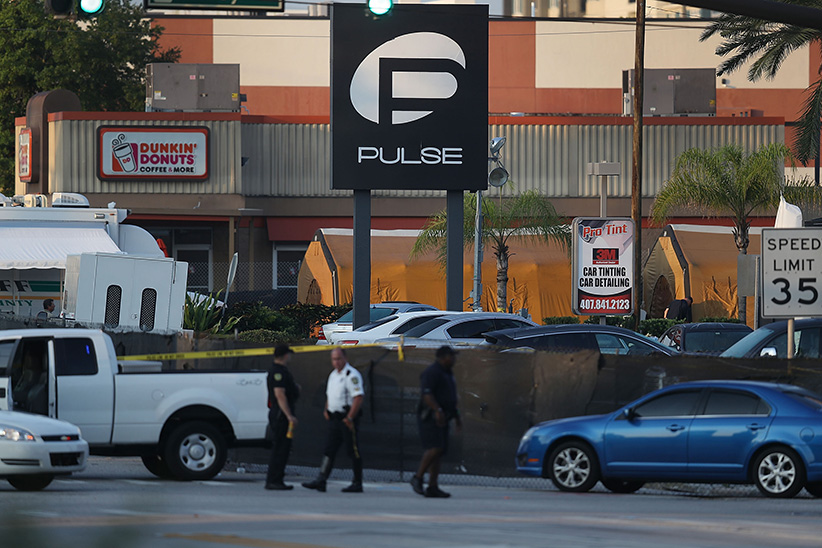 WASHINGTON — Donald Trump is backtracking from his contention that victims of the Orlando massacre should have been allowed to carry arms into the nightclub where they were attacked — a stance even the NRA says is untenable.

The presumptive Republican presidential nominee tweeted Monday that he was “obviously talking about additional guards or employees” of the Orlando, Florida, nightclub where Omar Mateen murdered 49 people when he spoke about the value of having more people armed to challenge the gunman.

That’s not what Trump said previously.

A day after the attack, he told radio host Howie Carr: “It’s too bad that some of the young people that were killed over the weekend didn’t have guns, you know, attached to their hips, frankly, and you know where bullets could have flown in the opposite direction, Howie. It would have been a much different deal. I mean, it sounded like there were no guns. They had a security guard. Other than that there were no guns in the room. Had people been able to fire back, it would have been a much different outcome.”

Trump had repeated his suggestion at rallies across the country last week. In Atlanta he said the carnage would have been lessened if “some of those great people that were in that club that night had guns strapped to their waist or strapped to their ankle.”

His statements were a step too far for the National Rifle Association, a powerful lobby for armed self-defence and broad permissions to carry weapons. “No one thinks that people should go into a nightclub drinking and carrying firearms,” the NRA’s chief lobbyist, Chris Cox, told ABC’s “This Week” on Sunday. “That defies common sense. It also defies the law.”

It was the latest scuffle between Trump and those supporting him in the political establishment. Trump, the party’s presumptive presidential nominee, had achieved a fragile peace with Republicans and their allies om which they support him in exchange for Trump uniting the Republican party and fighting his likely general election opponent, Democrat Hillary Clinton. Instead, his proposals for fighting terrorism — such as by targeting Muslims and restricting assault-style weapons— have inflamed his supporters.

The NRA dustup came at an especially sensitive time.

The Senate prepared to vote Monday on expanded gun background checks and proposals to keep people on a government terrorism watch list or other suspected terrorists from buying guns. But prospects for any significant change in gun laws were dim.

The Orlando shooter, Omar Mateen, was added to a government watch list of people known or suspected of being involved in terrorist activities in 2013, when he was investigated for inflammatory statements to co-workers. But he was pulled from that database when that investigation was closed 10 months later.

Trump made the case on the weekend that the U.S. should consider profiling Muslims inside the country as a terrorism-fighting tool, the latest example of his backing positions that could single out a group based on its religion.

“We really have to look at profiling,” Trump told CBS’s “Face the Nation.” ”It’s not the worst thing to do.“

Trump’s proposal runs counter to Justice Department policy, which prohibits profiling on the basis of race, religion, ethnicity and national origin. That profiling ban applies not only to federal agents but also to local law enforcement officers who participate in federal task forces.

Trump’s increasing embrace of policies that could isolate Muslims in America is extraordinary for a candidate assured of his party’s presidential nomination. The proposals have been roundly criticized by many Republican leaders, including House Speaker Paul Ryan. Civil libertarians, Muslims and others also have strongly disagreed, arguing that profiling is unconstitutional and often constitutes unlawful discrimination based on race, religion and other factors.