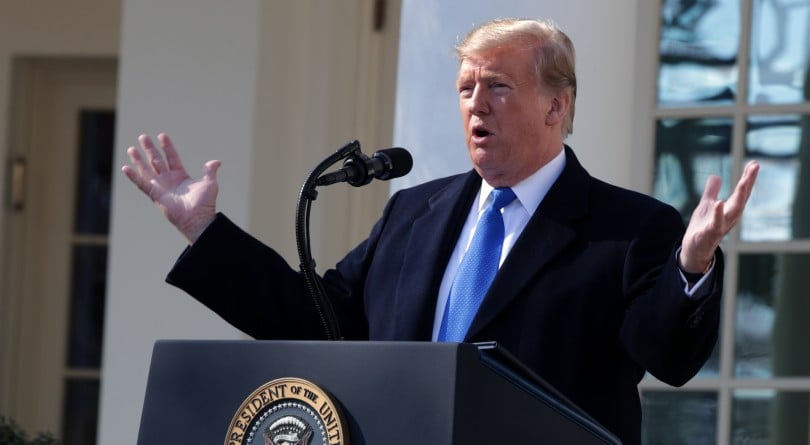 Trump speaks in the White House Rose Garden on Friday as expectations mount that he will declare a national emergency to free up funding to build a wall along America's southern border. (Photo by Alex Wong/Getty Images)

President Donald J. Trump declared that a national emergency exists at America’s hole-y southern border on Friday, clawing cash from across his government to complete his beloved Huge Wall of Mexico.

The good news from Trump’s perspective was that his declaration could accrue as much as US$8 billion for the building and barbed-wiring of a fence designed to repel repugnant (i.e., brown-skinned) desperados and their dying infant children from the Pacific strand to the Texas tidewater by re-routing monies already budgeted for drug interdiction and military construction projects elsewhere on this tired, warming globe.

The bad news for Trump was that, when the wall is completed, the Democratic Party still will be on his side of it.

“We will have a national emergency, and we will then be sued, and they will sue us in the Ninth Circuit, even though it shouldn’t be there,” the president sing-songed to reporters in the Rose Garden of the White House, predicting that a Democratic challenge to his latest FOX News-baited, anti-foreigner fiat will meet the same fate as his 2017 ban on migrants from a half-dozen Muslim terror-nests; namely, victory at the nation’s right-tilting bench of final appeal.

RELATED: Trump’s cruelty toward migrants is shown up by this touching act of mercy

With the next presidential election only 89 ½ weeks away, outraged opposition by the twenty-odd Democrats who are seeking (or pretending not to be seeking) the nomination to oppose the cumbrous, 243-pound incumbent is certain. But the confirmation of Justice Brett “I Like Beer” Kavanaugh last fall makes it likely that whatever The Donald wants, jurisprudentially speaking, The Donald will get.

“If we had the wall, we wouldn’t need the military, because we’d have the wall,” Trump reasoned, circularly. “It’s a great thing to do,” he said of his proclamation, blaming himself for making the U.S. economy so red-hot that all the sh–hole countries of the world were emptying their huddled masses in favour of caravanning to the Rio Grande.

“What happens,” Trump explained, “is that more people want to come.” As he spoke, the Dow Jones Industrial Average was up 370 points, triggering even more evacuations from Tegucigalpa, Huehuetenango, and beyond.

“Republicans should have some dismay about the door they are opening,” Speaker Nancy Pelosi had warned on Thursday when the president’s intentions were announced on the floor of Congress by the shrugging Republican leader, Mitch “There Is Little Education In the Second Kick Of The Mule” McConnell, who had counselled the president not to go the emergency route. Ms. Pelosi suggested that the president wield the same terrible swift sword to try to prevent the nation’s daily hecatomb of schoolhouse shootings and workplace massacres. “THAT’S a national emergency,” she said. “Why don’t you declare that emergency, Mr. President? I wish you would.”

By mid-afternoon Friday, Rep. Alexandria Ocasio-Cortez, fresh from halting an army of Amazonians at the East River lest they pollute the Borough of Queens with billions of capitalist dollars, announced her plan to introduce legislation annulling the declaration, vowing on Instagram that she and her comrades “aren’t going to let the President declare a fake national emergency without a fight.”

“California will see you in court,” echoed the governor of the Golden State.

But the White House pushed back, declaring that Trump’s proclamation rests on “solid legal ground” and noting that sachems from Woodrow Wilson to Barack Obama used similar measures to promote agricultural exports, halt a postal strike and wage the undeclared Korean war. When a bipartisan majority in both houses of Congress granted Trump US$1.375 billion for wall-building on Thursday, the administration argued, it certified such erections as a legitimate action. (Shadow president Sean Hannity of FOX called it “a garbage deal.”) All the president was doing with his executive order, then, was gilding the legislative lily.

“When the president acts pursuant to an express or implied authorization of Congress, his authority is at its maximum,” the White House deposed, citing a 1952 case in which President Harry Truman nationalized the American steel industry. “For it includes all that he possesses in his own right plus all that Congress can delegate. In these circumstances, and in these only, may he be said (for what it may be worth) to personify the federal sovereignty.”

“I’m not doing it because it was a campaign promise,” Trump whoppered Friday, having vowed to rid the land of Latino rapists and murderers in every single public speech he has made for the past four years. “I could do the wall over a longer period of time. I didn’t need to do this, but I’d rather do it faster. I want to get it done faster, that’s all.”

But fulfilling his rallying cry comes with a price—what will the most bestial bellowers of the president’s base have to chant about now?

RELATED: The story behind the ‘little girl’ photo that’s turning the world against Trump’s border policy

It was a self-satisfied Trump whom we saw Friday in the Rose Garden, where wine-headed finches were trilling the first burbling songs of spring in the budding magnolias, having somehow eluded the Border Patrol on their migration north from Oaxaca. In addition to his declaration on border-wall financing, the King of Debt shrugged off his country’s collective $22-trillion mortgage, and praised himself effusively for a good day on Wall Street, a Chinese economy collapsing under the weight of his tariffs, and his outreach to the cuddlesome Kims of North Korea.

Before Trump were arrayed the top brass of his frontier cavalry and a half-dozen “Angel Moms” whose spouses and children had been murdered by illegal border-crossers—familiar, willing props in Trump’s crusade to seal the southern frontier against the brown-skinned strivers who break in daily waves against it, fuelled by Central American poverty and the insatiable craving to get wasted on pills and poison that spans all strata of American society.

“What about the demand?” cried a reporter from Playboy, high on logic, but this plaint was ignored. By this time, Donald J. Trump already was waxing wistful about why his name, and not Barack Obama’s, should be inscribed forever in the book of history as a man of charity, love and peace.

“They gave it to Obama.  He didn’t even know what he got it for. He was there for about 15 seconds and he got the Nobel Prize,”  Trump griped of the statesman who came before. “He said, ‘Oh, what did I get it for?’

“With me, I probably will never get it,” the great wall-builder sighed.