Republican front-runner rejects criticism of his proposal to ban Muslims from U.S.

By The Associated Press December 8, 2015 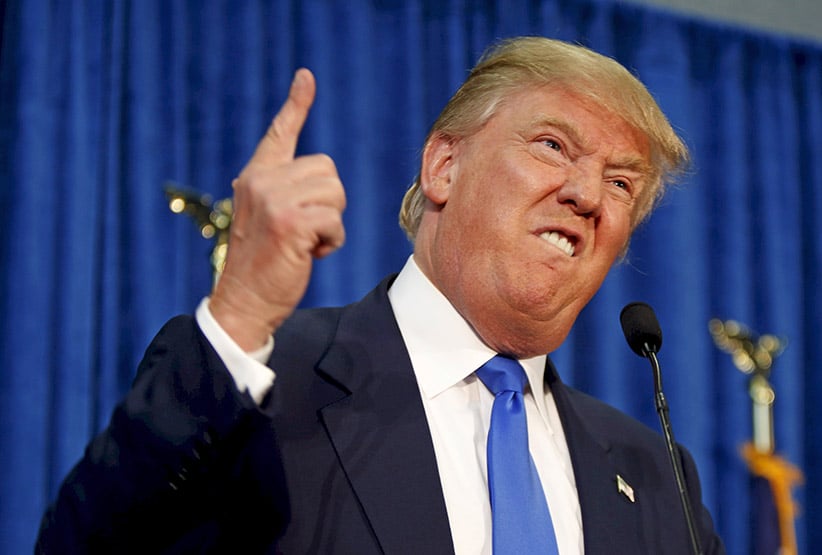 MOUNT PLEASANT, S.C. — Donald Trump on Tuesday stood by his call to block all Muslims from entering the United States, even as the idea was widely condemned by rival Republican presidential candidates, party leaders and others as un-American.

Trump’s call Monday for a “total and complete shutdown of Muslims entering the United States” has drawn an unusually forceful level of rebuke and condemnation from across the party and abroad.

“I don’t care about them,” Trump told CNN in an early-morning phone interview, when asked about denunciation by Republican Party leaders. “I’m doing what’s right.”

Trump’s campaign has been marked by a pattern of inflammatory statements, dating back to his harsh rhetoric about Mexican immigrants. He has taken a particularly hard line against Muslims in the days since the Paris attacks, advocating enhanced surveillance of mosques due to fears over radicalization.

Despite his controversial rhetoric, Trump has held on to his status as the front-runner for the 2016 Republican nomination, with less than two months to go before the first primary contests. Many Republicans worry that his rise will damage the party’s chances of winning the White House in November, as Hillary Rodham Clinton consolidates her own front-runner status on the Democratic side.

“This is not conservatism,” House Speaker Paul Ryan told reporters after a closed-door Republican caucus meeting in response to Trump’s comments. “What was proposed yesterday is not what this party stands for and more importantly, it’s not what this country stands for.”

White House spokesman Josh Earnest described Trump’s campaign as a “carnival-barker routine” and said any Republican candidate too scared of the Republican political base to condemn Trump shouldn’t be president.

British Prime Minister David Cameron slammed Trump’s proposal as “divisive, unhelpful and quite simply wrong.” Muslims in the United States and around the world denounced it as unconstitutional or offensive. The front page of the Philadelphia Daily News featured a photo of Trump holding his right hand out as if in a Nazi salute with the headline “The New Furor.”

But Trump, who appears to revel in controversy, didn’t back down, saying that banning all Muslims “until our country’s representatives can figure out what the hell is going on” is warranted after last month’s attacks by Muslim extremists in Paris and last week’s shooting in San Bernardino, California, that killed 14.

“We are now at war,” said Trump, who further defended his plan by comparing it with President Franklin Roosevelt’s decision to intern Japanese Americans during World War II.

Trump’s proposed ban would apply to immigrants and visitors alike, a sweeping prohibition affecting all adherents of a religion practiced by more than a billion people worldwide. The current Republican poll-leader announced his plan to cheers and applause at a Monday evening rally in South Carolina, where many supporters welcomed the proposal.

Since the Nov. 13 attacks in Paris that killed 130 people and wounded hundreds, a number of Republican presidential contenders have proposed restrictions on refugees and tighter surveillance in the U.S.

But Trump’s proposed ban goes much further, and his Republican rivals were quick to reject the latest provocation from a candidate who has delivered no shortage of them. “Donald Trump is unhinged,” Jeb Bush said via Twitter. “His ‘policy’ proposals are not serious.”

Sen. Lindsey Graham went further, warning that Trump’s rhetoric risked inflaming tensions in the Middle East, echoing concerns that it plays right into the recruiting strategy of Islamic State militants, who have framed their battle as a war between Islam and the West.

“He’s putting our soldiers and diplomats at risk, he’s empowering the enemy,” said Graham, another Republican presidential contender, in an interview with CNN. Trump, he said, is making new enemies of people “who came to our side in Iraq and Afghanistan and who are under siege in their own countries.”

“It basically becomes a death sentence for them,” he added, describing Trump as “ISIL man of the year.”

Trump’s proposal has also drawn criticism from legal experts who challenge its constitutionality and feasibility.

Leti Volpp, a University of California expert on immigration law said “there is no precedent for a religious litmus test for admitting immigrants into the United States.”

“Excluding almost a quarter of the world’s population from setting foot in the United States based solely upon their religious identity would never pass constitutional muster,” Volpp said.