Trump was followed by his usual band of backers and detractors, but left his meeting with GOP leaders uncharacteristically speechless 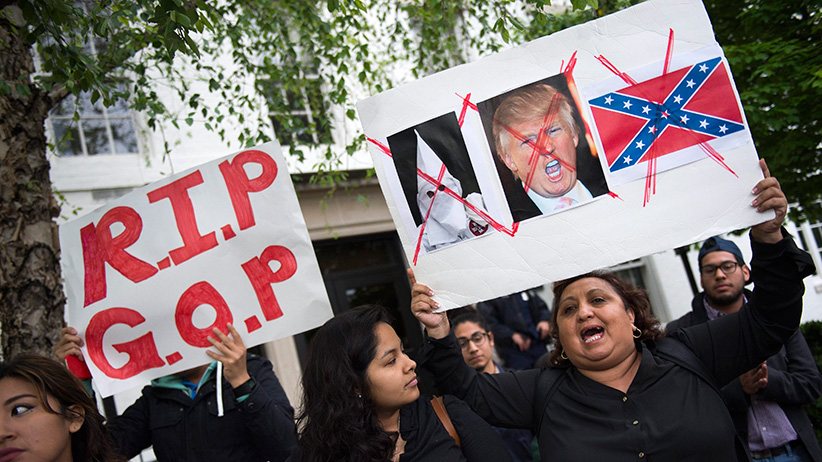 A self proclaimed undocumented immigrant member (R) of ‘United We Dream’ protests outside the Republican National Committee building in Washington, DC, USA, 12 May 2016. GOP presidential candidate Donald Trump is meeting with Speaker of the House Paul Ryan at the same time. (Shawn Thew/EPA/CP)

Donald J. Trump, the Republican Party’s believe-it-or-not nominee for president, journeyed to the U.S. capital but not the U.S. Capitol on Thursday, stopping to meet off-campus with dumbstruck Republican House and Senate leaders while a raucous symphony of bagpipers, ram’s-horn-tooters, paperless Latino protesters, hymn-singing chaplains and Trumpian impersonators invaded the air outside.

“Undocumented! Unafraid!” chanted a dozen young Hispanics in front of the offices of the Republican National Committee while Trump huddled with Rep. Paul Ryan of Wisconsin, the Speaker of the House who had declined to endorse his party’s standard-bearer in the days since Texan-Canadian Sen. Ted Cruz and Ohio Gov. John Kasich abandoned their campaigns.

“I have a dream that, one day, a white man will be able to walk down the street being as racist and misogynist as he wants!” microphoned a parodist in pink sneakers who was wearing a gigantic papier-maché replica Donald Trump head with spray-painted cotton batting for hair. “We want an end to everything that isn’t Trump-esque!”

“Shut up!” echoed a Trump sympathizer from a corner of the RNC’s garden. This went on for more than an hour and a half.

“BIKERS FOR TRUMP!” proclaimed a placard help aloft by a leather-clad motorcyclist (who was wearing a $40,000 gold Rolex Oyster watch).

The bombastic tycoon, meanwhile, was rendered uncharacteristically speechless by his parleys with Ryan and Senate majority leader Mitch McConnell of Kentucky, whose party will stage its now-moot primary next week. Trump made no public comment before jetting out of the city, and, at press time, had only sent off a single suspiciously syrupy tweet: “Things working out really well!”

It was Trump’s first pilgrimage to meet elected Washington officials since he announced his “America First” (and everybody else last) foreign policy in April, and his most important visit since he told the House of Representatives subcommittee on native American affairs in 1993 that the members of the Pequot tribe who were applying for a casino licence in the New York suburbs “don’t look like Indians to me and they don’t look like Indians to Indians.”

A tepid and torpid communiqué, co-signed by Trump and Ryan, was released to slavering newshounds—“very positive step toward unification . . . many important areas of common ground”—but, at a press conference in the house sub-basement later in the day, Ryan persisted in withholding his formal endorsement.

“The process of unifying the Republican Party takes a little time,” the Speaker spoke. “You don’t put it together in 45 minutes.” Ryan told reporters that he had previously spent only about 30 seconds in the Donald’s company, and that the New York zillionaire’s successful candidacy has been “really kind of unparallelled.”

Asked what the two men had talked about—assuming they could hear each other over the bagpipes, ram’s horn, etc.—Ryan responded, “We talked about life.” 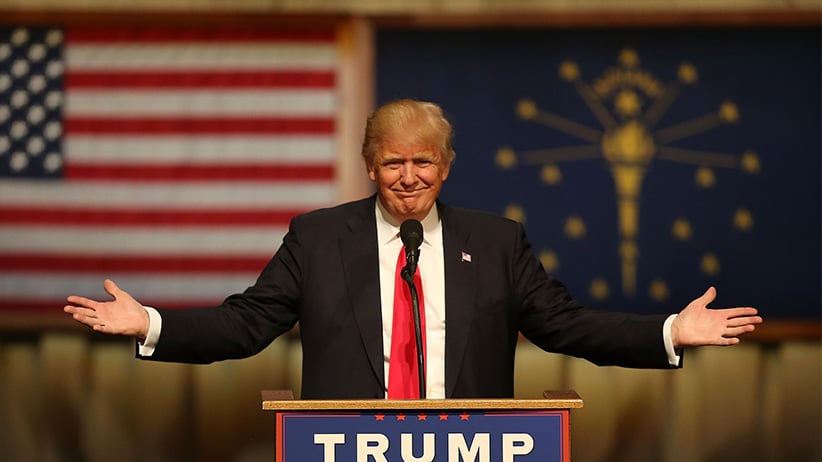 Republican presidential candidate Donald Trump speaks during a campaign stop at the Palladium at the Center for the Performing Arts on May 2, 2016 in Carmel, Indiana. (Joe Raedle/Getty)

Members of Congress who spoke to Maclean’s outside the RNC HQ were sanguine about Trump’s ascendancy, with Rep. Tom Cole of Oklahoma, former chairman of the National Republican Congressional Committee, saying that “there’s a lot of education that I need to have on what he thinks.”

Cole cautioned that, even if Trump is trounced in the general election by former Secretary of State Hillary Clinton, this does not necessarily mean that the Republicans will lose their comfortable majority in the House of Representatives or their slim control of the Senate.

“He needs to respect that we did win a majority in a year when the Democrats won the presidency by five million votes,” said Cole, who never has met the Donald in person. “I don’t expect members to change their positions just because the presidential nominee doesn’t agree with them. It’s not like this majority was made by Donald Trump.”

“I don’t have a problem adjusting our platform to align with his views. The standard-bearer of the Republican Party is the head of the Republican Party,” Rep. Chris Collins of western New York told Maclean’s. “He is absolutely a mainstream Republican. He is an American, an individual who represents America’s dream to be great again.”

“We don’t need the word ‘endorsement,’ ” said Collins. “I have spoken to very few members who are not on the Trump train.”

(Beating the metaphor even further to death, Secretary of Labor Tom Perez, speaking “in my personal capacity” as a Clinton supporter, told reporters on a conference call Thursday that “it is a trainwreck—the Trump trainwreck is indeed a trainwreck for Latinos who are trying to make ends meet.”)

“I see America at a crossroads,” Mayor Rose told Maclean’s. “Donald Trump has obviously hit a nerve that resonates. I’m just trying to figure out what that nerve is.