Donald Trump has a new apprentice—the prime minister of Italy 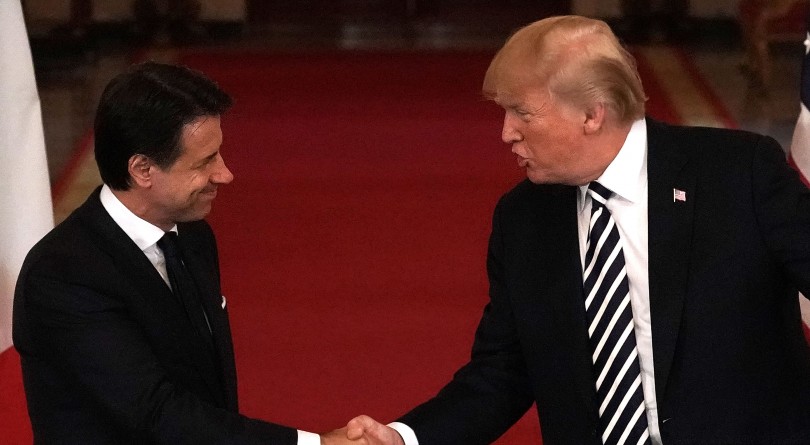 Italy has had 66 governments since the end of the Second World War but the United States has had no one but Donald Trump for what seems like even longer. Here he was in the chintzy East Room of the White House on Monday—the eve of the felony trial of his former campaign manager on charges of tax fraud and money laundering, with so many other outrages and no-see-ums swirling in the air, waiting to bite deep. He was with a neophyte Prime Minister from bella Italia, all made up with that raw sienna face and that landing-strip hair and making believe that everything would be molto bene, molto bene if only he could get his way.

“We are the laughingstock of the world,” Donald Trump said in the White House on Monday, but no one in the gilded hall was giggling.

What in other eras might panic the populace and sucker-punch the bond markets has become the daily bowl of Pablum here: the petulant threat to melt down the government, Congress and the federal workforce and their families be damned; the sudden eagerness to meet the turbaned, terrorist mullahs of Iran, anyplace, anytime; the tweeting like a middle-schooler about “Angry Dems” and “the Witch Hunt” and reporters who have been “driven insane,” as the President of the United States found time to hunt-and-peck on Sunday, “by their Trump Derangement Syndrome.”

But derangement is in the eye of the beholder; the president’s approval rating among Republicans has soared to 90 per cent. (In a recent poll, only 84 per cent of American Catholics voiced their approval of Pope Francis—The Donald’s more popular than the Vicar of Christ!) Imagine if Barack Obama hadn’t had the self-discipline to holster his Blackberry for eight full years—imagine all the insufferable tweets about green energy and constitutional law. All that is certain about this epoch and the next one is that Mister Normal has gone away and will never return.

“We are doing what we had promised during our electoral campaign, and we are working in order to give answers to the expectations of our citizens so that we won’t disappoint them and we don’t betray our mandate,” responded the Italian.

The man in the too-long necktie, who was sent to Washington by a hydrophobic minority of voters to blow up the city and the system, has been president for 557 days and on Monday he looked it in the lemony light of the White House chandeliers. Still, his mind is functional, if one-tracked, and he is not yet as wan and wrinkled as Abraham Lincoln, whose riddled body lay in the same room where The Donald stood on Monday, though it might just be the rouge and the concealing stick. Or maybe we are so used to Trump now that his drone and his podium pout have lost their novelty.

“I’m very envious of the growth,” he said of the Trump Economy.

“We had a very good G7 meeting. That’s where Giuseppe and I became friends,” The Donald said, as if they had met in Homeroom, or Band.

RELATED: The FBI agent who sent anti-Trump texts proves a fighter as well as a ‘lover’

“In Italy, in the United States, we are proving that change is possible,” said Giuseppe Conte. Yet how lonely and isolated must a man be to hail a foreign politician with whom he has shared only few moments, none of them in private, and a couple of long-distance phone calls as “my new friend.” We never heard Barack Obama say the same about Raúl Castro.

Donald Trump speaks more fluently—if not more factually—now about such minutiae, once irrelevant to his penthouse life, as the Immigrant Visa Lottery and Liquefied Natural Gas. He has flogged the quadriga of border security and NATO funding and trade deficits and Robert Mueller so relentlessly that his tirades about them canter well-gaited off his tongue,

Italy, too, is something that Donald Trump might have heard of, having grown up in consort and conflict with the construction unions of New York City, and having been likened by James Comey to a Mafia chieftain named Sammy The Bull. Also, there is the man now entrusted with saving Trump’s carpaccio from landing in a federal prison – a Tuscan’s grandchild and a felon’s son named Giuliani.

Rudy Giuliani said of Robert Mueller on Monday that “he has no information incriminating of the president—I know that for a fact.”

“They can squeeze him, [but] Paul Manafort does not know anything,” Giuliani insisted. “What I’m saying is, he was not involved with intimate business relationships with Donald Trump.”

What other intimate relationships Trump may have enjoyed—before, during or after his three marriages—is not within the Witch Hunt’s purview. (The Stormy Daniels, Karen McDougal, and Summer Zervos cases proceed under their own steamy steam.) Jury selection begins Tuesday in Virginia for Manafort’s trial on charges of looting and laundering tens of millions of dollars in consulting fees from the ancien Ukrainian regime. Meanwhile, one of Donald Trump’s oldest new friends, attorney Michael Cohen, is singing to the feds like Caruso.

“I don’t even know if that’s a crime, colluding about Russians,” Giuliani said, referring to the Trump campaign’s alleged vamping with the Vladimirs. “You start analyzing the crime—hacking is the crime … the President didn’t hack.”

“I’ll meet with anybody,” Donald Trump said in the East Room when asked about the Ayatollahs. “I believe in meeting. The prime minister said it better than anybody can say it: speaking to other people, especially when you’re talking about potentials of war and death and famine and lots of other things—you meet. There’s nothing wrong with meeting. We met, as you know, with Chairman Kim.”

Back at the White House on Monday, a reporter’s earphone crackled with the musical cadences of the Roman tongue: il popolo Italiano . . . un questione fondamentale . . . prima di tutti . . .”

“Is Michael Cohen lying?” the shouts followed him as he left the ceremonial chamber.

“What will it take to sit down with Bob Mueller?” the truth-tellers cried, but the president and his new best friend— the older man’s hand guiding the younger’s—were buddy-movie gone.