Donald Trump is still standing, but his wounds are fatal

Supporters saw Sunday's debate as a big win. There just aren't enough of them left for it to matter. 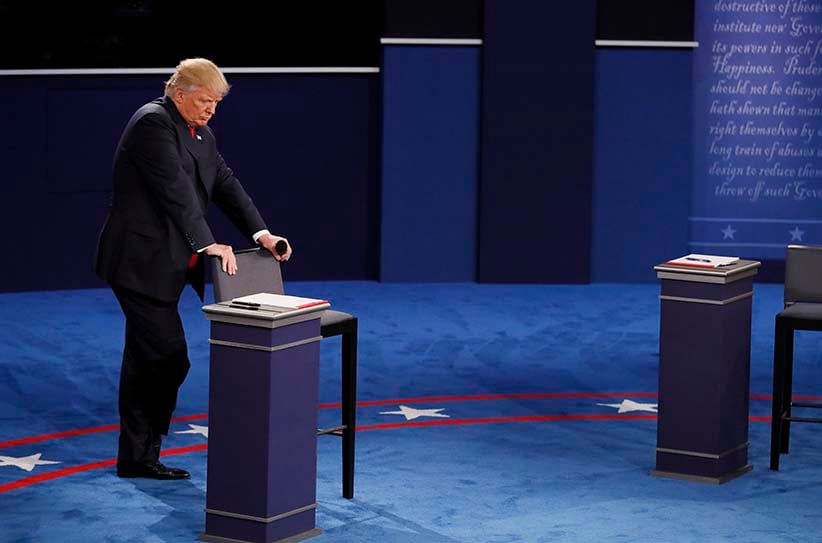 Figuratively speaking, Hillary Clinton travelled to the debate in her usual motorcade. Donald Trump arrived in a banged-up roadster with smoke pouring from the engine; it careened through the parking lot, hit the curb, and screeched to a halt on the sidewalk.

The last three days have seen some of the most volatile political moments in recent history. Slipping in the polls, Trump was hit with yet another accusation of impropriety. But this time it came with audiotape, and it appeared to be the straw that broke the back of the self-proclaimed billionaire’s campaign for the U.S. presidency.

By Sunday afternoon, more than 160 Republican governors, senators, and Congressmen had abandoned Trump. The chairman of the Republican National Committee had to deny rumors that the party would no longer be funding his race, and would direct their money to down-ticket candidates.

Defiant and aggressive, Trump pushed on. The morning of the debate he sent one of his last surrogates, Rudy Giuliani, onto the airwaves to defend and counterattack. But for the most part this just made things worse as TV hosts pushed back with undisguised disdain.

In the hours before the debate, Trump tried one more gambit—appearing at a press conference with three women who have accused Bill Clinton of sexual assault, and one whose rapist was defended in court by Hillary Clinton when she was assigned as his defence attorney in 1975. The spectacle was jarring, if not obviously effective.

This was the unsettled prologue for what may have been one of the most anticipated political debates in a generation.

It began with a serious-looking Clinton and a subdued Trump refusing to shake hands. With the very first question, the moderators immediately addressed the issue that has preoccupied America over the last 48 hours: Trump’s audiotapes. His defence was to deny and misdirect. He insisted no one respects women as much as he does, and in almost the same breath began to talk about ISIS.

This happened again and again when he was pushed on a hard subject. Whatever the accusation, he would deny having ever said that, then immediately attack Clinton on an entirely unrelated topic. It was artless and reeked of desperation. After 20 minutes, Trump became more flustered, and abandoned his restrained demeanour.

At that point the gloves came off and Trump went after his opponent’s husband. Clinton deftly avoided the jab, quoting Michelle Obama by responding, “When they go low, we go high.” That seemed to hit a nerve and sparked one of the most bizarre moments in the history of televised presidential debates. Trump stared at Clinton menacingly, called her the devil, and promised when elected he would appoint a special prosecutor and send her to jail. The spectacle of an American presidential candidate threatening his opponent with imprisonment was so unexpected and unprecedented it took several minutes to fully grasp what had transpired.

MORE: Catch up on the second presidential debate with our liveblog

In the first part of the debate, Trump paced back and forth behind Clinton, and at some points seemed to loom menacingly over her. But as the debate progressed, he grew less agitated, while Clinton stayed calm throughout.

For her part, Clinton delivered a mostly unexceptional performance. That is not to say it wasn’t good. She handled almost every question professionally, answered with well-considered responses. She made an effort to connect with the audience members asking questions, and she never let Trump rattle her. But there was nothing new in what she said. It was campaign boilerplate, delivered in the same tone and manner that we have seen before. And she didn’t try to land any knockout punches; probably because she couldn’t damage Trump any more than he is already damaging himself.

You want to know who won? Depends on how we score this. Trump arrived as a man in free fall. You could literally watch him regain control over the course of the debate, and he walked off stage under his own power. His campaign could have easily ended on Sunday night. It didn’t, and that has to be seen as a victory for him.

Trump’s supporters, those stalwarts who did not leave him over the course of the weekend, likely saw Sunday’s debate as a big win. Trump clearly played to his base, referencing obscure issues that would only be understood by the most ardent anti-Clinton conspiracy theorists. He attacked the moderators more than once, complaining that they were against him, reinforcing the idea he is up against mainstream media, too. But here’s the problem: there are just not enough of his supporters left for this to matter.

The polls all agree, Trump is losing this race. He needs to win over almost all of the 10 per cent of the voters who are still undecided. Tonight’s debate did not help him. It may have stopped some of the bleeding, but that’s all. Trump’s unlikely pursuit of the presidency is effectively over. He’s fatally wounded. The only question now is whether the Republican Party will die with him.