Donald Trump Jr.’s inner monologue on the morning of July 11 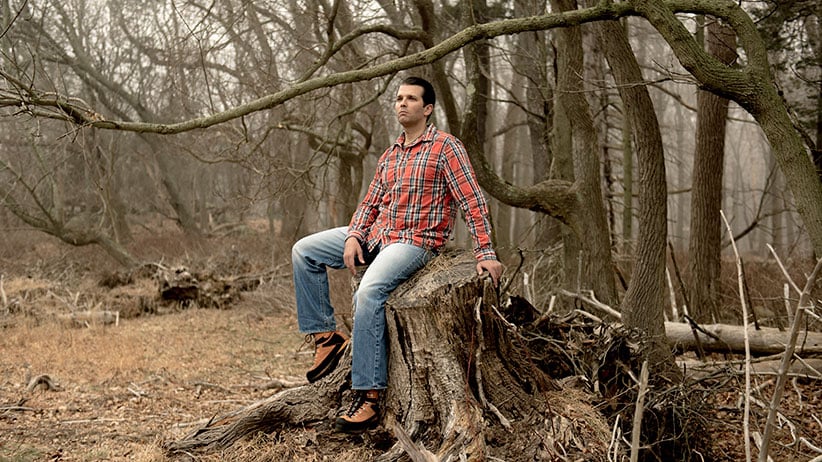 Surrounded. Under siege. Like Butch Cassidy and the Cisco Kid at the Alamo.

There’s got to be a way out.

Maybe it’ll help if I rub my chin while I’m thinking.

Man, I’ve got a great chin. Why don’t I touch it more often?

This is really satisfying but I should probably stop rubbing my chin.

Normally, my next move would be obvious: Frame Eric.

It almost always works. Half the time he frames himself without even knowing it.

But I know Dad’s saving him to take the rap for something bigger.

Lately he’s been handing Eric pieces of paper and making him read phrases into a microphone. “It was all my idea.” “Russia is my true home.” “That’s me in the pee tape.”

He never clues in. Thinks he’s auditioning for a Bond film.

Anyway, Eric’s off the table.

READ MORE: What to expect when you’re expecting a better president

There’s gotta be something.

[Squints hard.] THINK LIKE A SMART PERSON WHO IS ME.

[There is a long pause/possible nap.]

I know what to do!

Oh, it’s so simple. SO BRILLIANT.

THEIR thunder will become MY thunder.

I’ll show them exactly the kind of intellect they’re dealing with.

Those secret emails of mine that they’re about to reveal?

I’ll put them out there so everyone can see that I’m not guilty of being guilty.

So everyone can see that I happily met with representatives of a foreign adversary for the sole purpose of acquiring damaging information on a political opponent that both of us wanted to destroy.

READ MORE: Rating the sycophants around Donald Trump, from one to five bootlicks

It’s like what that dead guy wrote in that book about war art that Dad kept trying to force me to read: Keep your friends close and, I don’t know, make a painting of them or whatever.

Or that other saying: To know your enemy, you must become AWESOME.

This is the perfect plan.

SORRY I BLEW YOUR MINDS WITH MY SUPERIOR BRAIN THINKING, NEW YORK TIMES!

Wait, I should probably clear this with my lawyer.

[A monkey on the couch makes a gesture that could be construed as a nod.]

And now, to triumphantly monitor my Twitter mentions for praise and…

Why does everyone keep calling me a dumb motherf—-

“Mr. Trump, the president wants to speak with you. Line one.”

[A shaken Don Jr. picks up the phone.]