Donald Trump: 'Now he has to fight other Republicans?' 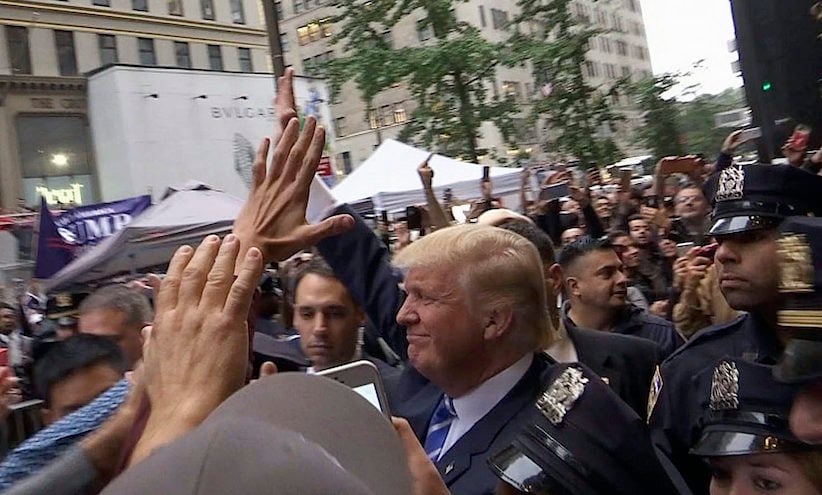 WASHINGTON — Donald Trump’s candidacy has long exposed divisions within the Republican Party. But GOP leaders had hoped to prevent an all-out civil war at least until after the election.

They appear to be failing.

The top Republican in Congress on Monday effectively abandoned Trump, while the head of the Republican National Committee, or RNC, declared he was in full co-ordination with the embattled presidential nominee — opposing positions that highlight a political party increasingly battling itself as Election Day approaches.

Pro-Trump protesters clogged the sidewalk in front of the RNC’s Capitol Hill headquarters on Monday.

“He already has to fight Hillary and Bill (Clinton) and the media. Now he has to fight other Republicans?” asked Kelley Anne Finn, 58, from northern Virginia. “We’re not voting for any of the people who aren’t voting for Trump.”

Forty Republican senators and congressmen have revoked their support for the Republican presidential nominee — with nearly 30 of them calling on him to quit the race altogether in recent days. Few were passionate Trump supporters to begin with, the last straw being a video released late last week revealing the former reality television star using predatory language regarding women a decade earlier.

House Speaker Paul Ryan told fellow lawmakers on Monday he would not campaign for or defend the floundering businessman in the election’s closing weeks.

Ryan essentially conceded defeat, saying he would devote his energy to ensuring Clinton doesn’t get a “blank check” as president with a Democratic-controlled Congress, according to people on his private conference call with GOP House members. While the Wisconsin Republican did not formally rescind his own tepid endorsement of Trump, he told lawmakers they were free to do just that and fight for their own re-election.

Trump fired back on Twitter, saying Ryan, who is third in line for the presidency, “should spend more time on balancing the budget, jobs and illegal immigration and not waste his time on fighting Republican nominee.”

Later in the day, one of Ryan’s closest friends, Republican chairman Reince Priebus, privately assured anxious RNC members the party would not abandon its nominee under any circumstances. In a national conference call, the chairman described Trump’s apology for his sexually aggressive comments as “heart-felt.” Trump apologized during Sunday’s debate, but also repeatedly described groping women without their permission as “locker room talk.”

“Everything is on course,” Priebus said, according to a participant in the call. He said the RNC would continue to co-ordinate the party’s field efforts in battleground states with the Trump campaign, despite recent reports to the contrary. 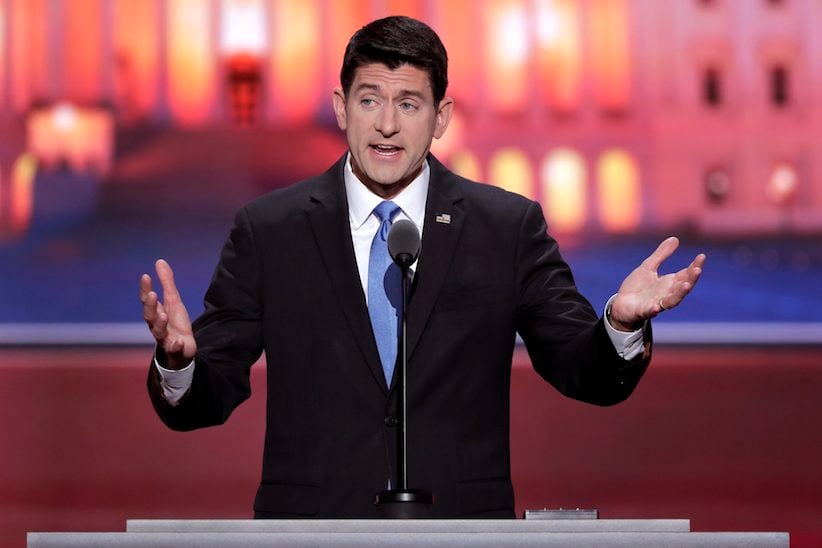 The intraparty chaos underscored the perilous predicament Republicans find themselves in one month from Election Day.

Recent revelations of Trump’s predatory comments deepened the worries among GOP officials who fear he’ll drag down their own electoral prospects in November — if not stain the Republican brand for a generation. But others see no way for Republicans in other races to win without the backing of Trump’s loyal supporters.

“I am just tired of these guys folding up like a cheap tent just when the going gets tough,” pro-Trump protester Myron Pecs said outside the RNC as he waved a sign that read, “Fight for Trump.”

He called Ryan’s approach on the conference call “wishy-washy.” ”He’s been wishy-washy from the start. I wish he wasn’t re-elected,“ said Pecs, a 27-year-old writer from Fairfax, Virginia.

For Ryan, the most pressing goal through the next four weeks is preventing Republicans from losing control of the House, a scenario that seemed remote as recently as a week ago. Republicans are not yet panicking given their wide 246-186 seat majority, but party leaders acknowledged on Monday’s conference call that the majority was more in peril given Trump’s problems.

Meanwhile, Clinton’s campaign hammered Republicans for recoiling from Trump at this late date, and she urged voters to hold GOP candidates accountable for standing by their nominee for months. She released new ads featuring Republican voters crossing party lines to cast their ballots for the former secretary of state.

“I don’t always agree with her, but she’s reasonable and she’s smart,” Republican Jennifer Kohn says in one spot.

Like the Capitol Hill protesters, Trump supporters in Congress are furious that Republican leaders would turn their backs on the nominee their party selected. In the conference call with Ryan, California Rep. Dana Rohrabacher called GOP leaders “cowards,” according to one participant, who like others, insisted on anonymity in order to describe the private discussions.

Trump’s Virginia chairman, Corey Stewart, who helped organize the RNC protest, said Ryan and other party elite didn’t understand that “the grass roots took control of this party when we nominated Donald Trump.”

Stewart was fired immediately after the gathering as Trump’s staff worked to downplay intra-party tensions.

“We have a tremendous working relationship with the RNC,” Trump campaign manager Kellyanne Conway said.