Donald Trump on Brexit results: 'It's a great thing.' 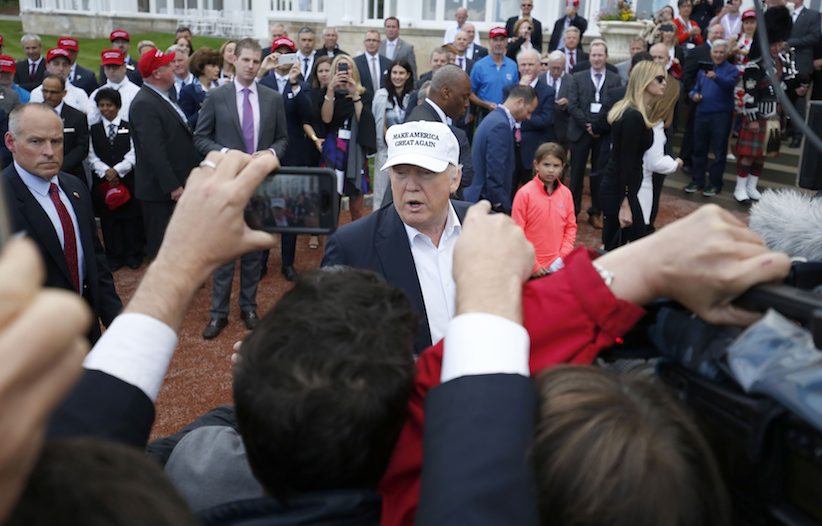 AYRSHIRE, Scotland — Donald Trump, in a closely watched visit to Scotland on Friday, hailed Britain’s vote to leave the European Union, drawing parallels to the anger driving his own presidential campaign.

“I love to see people take their country back,” he told reporters at a news conference at one of his golf courses in Scotland. “And that’s really what’s happening in the United States” and other parts of the world.

The campaign leading to Thursday’s stunning vote for Britain to leave the European Union shared some of the nationalist, populist themes driving the Trump campaign, including a wariness of immigration, concern about borders and skepticism of the value of multinational organizations.

For the record: Boris Johnson: ‘We can find our voice in the world again’

“I think there are great similarities between happened here and my campaign,” he said. “People want to see borders. They don’t necessarily want people pouring into their country that they don’t know who they are and where they come from.”

Trump, whose visit to Scotland is his first international trip since sealing sufficient delegate support to be the GOP standardbearer this fall, also predicted that other nations will follow the United Kingdom’s lead.

“This will not be the last,” he said earlier at a ceremony to mark the reopening of a golf resort he owns on Scotland’s west coast. “They’re angry about many, many things.”

Trump, who called the vote “a great thing,” said earlier this week that he hadn’t closely followed the so-called Brexit vote but he had come out in support of the “Leave” movement.

At the news conference, he described British Prime Minister David Cameron as “a good man” who “didn’t get the mood of his country right.”

For the record: David Cameron: ‘We trust the people’

Cameron had advocated for Britain to stay in the EU and announced earlier Friday that he would step down. The referendum to leave, which passed with nearly 52 per cent of the vote, immediately rattled the rest of Europe, sending markets plunging.

Trump also suggested that President Barack Obama, who expressed hopes that Britain would stay in the European Union, was partially responsible for the outcome, claiming that some of the votes were cast to spite him.

“If he had said no to it, I think the vote might have been different. He’s constantly dictating what the world should do. The world doesn’t listen to him.” he said. Trump also criticized his likely general election foe, Hillary Clinton who sided with Obama, for “misreading” the situation.

When asked if he had spoken to his foreign policy advisers about the vote, Trump said “there was nothing to talk about” and that a Trump administration would continue to count Britain as a close ally. He also frequently touted the vote’s impact in Scotland, though it had cast its ballots firmly in the “Remain” camp. He said he would support a vote for Scottish independence if one were held.

For the record: Scotland on Brexit results: ‘We do not want to leave’

Trump’s reason for his trip to Scotland wasn’t politics, but to check on a pair of championship-level golf resorts he owns there. Trump, who unlike previous presidential candidates did not schedule any political meetings while abroad, spent Friday morning marking the $200 million-plus rehabilitation of the famed Turnberry golf resort nestled on the rocky coast facing the North Atlantic Ocean.

Trump arrived at Turnberry on a helicopter and toured the grounds. His news conference, held on the green of the course’s 9th hole, underscored the frequent co-mingling Trump’s campaign with his businesses.

With his remarks carried live across the world, Trump spent most of his 15-minute speech not talking about Brexit, but offering a detailed accounting of the renovations to the course. Later, while answering reporters’ questions, he also played down concerns that the British economy would be hurt by the vote.

“If the pound goes down, more people are coming to Turnberry,” he said. “I think it could very well turn out to be a positive.”

Several dozen protesters demonstrated outside the resort but were kept at a distance from the candidate and the course. But one man, wearing a Turnberry fleece, managed to briefly interrupt the news conference by tossing a box of golf balls emblazoned with the Nazi logo.

Trump has long emphasized his ties to Scotland, where his mother was born, but he has waged battles with those in his ancestral homeland. This year, he was stripped of an honorary degree from Robert Gordon University in Aberdeen.

Trump was initially welcomed by Scottish leaders. But relationships soured over his Aberdeen golf course as arguments ensued over a nearby wind farm and the levels of investment promised. He also faced opposition from environmental groups concerned about development on Aberdeen’s famed dunes, and some local people refused to make way for the development.

Trump’s Scotland sojourn sparked worries from some Republicans at home in the United States who believe the trip was poorly timed. It comes as Trump has slipped in the polls and just days after he dismissed his campaign manager and reported having just $1.3 million in cash on hand at the start of June, more than $41 million behind Clinton.

Trump’s son, Eric, who oversaw the work at Turnberry, dismissed talk that the family’s business was distracting his father, telling The Associated Press “the eyes of the world” will be on Trump.