Donald Trump on SNL: 'Can he laugh at himself?'

Billionaire businessman predicts show will have its highest ratings ever with him at the helm.

By The Associated Press November 7, 2015 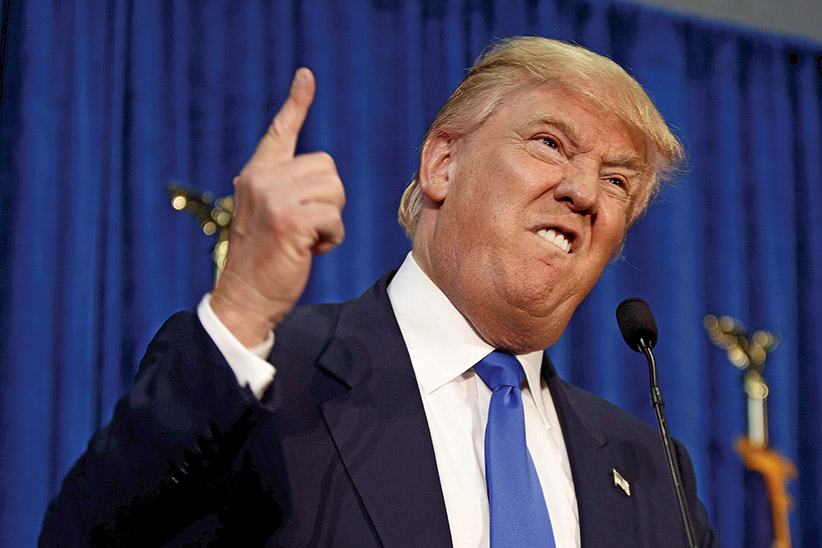 NEW YORK — Donald Trump’s unorthodox campaign for president will take another unusual step this weekend when he takes a break from typical campaigning to host “Saturday Night Live.”

The appearance will put the billionaire businessman and reality TV star in rare company: Only eight politicians have hosted “Saturday Night Live” in its entire 40-year-old history.

And only one of the other politicians-slash-guest hosts was an active presidential candidate — the Rev. Al Sharpton, who was seeking the Democratic nomination when he hosted in December 2003.

The appearance is the latest example of how Trump — who first guest hosted “SNL” in 2004 just weeks after the show he helped create, NBC’s “The Apprentice,” began airing — has been able to capitalize on his celebrity throughout his campaign, which has translated into to record ratings for networks on each of the three Republican debates.

Trump has repeatedly bragged about the attention his appearances has been generating, predicting the show will have its highest ratings ever with him at the helm.

Throughout its history, “SNL” has poked fun at political figures — both via cast impersonations and with guest appearances by the politicians themselves. It and other late-night television shows also give candidates the chance to show off their less serious sides and connect with a new and generally younger audience than the usual early-state rallies and debate stages.

Sharpton said his whole campaign team had opposed the idea when he was invited to host by “SNL” executive producer Lorne Michaels, but he decided an appearance could help humanize his persona.

“I was known in America at the time as a civil rights leader and protest leader, and I wanted to show that I could laugh at myself, I had a sense of humour, and be self-effacing, and that I could be comfortable with a broader audience,” he said in an interview, adding that the appearance yielded tangible results, with people bringing it up constantly as he campaigned.

The challenge for Trump, whose invitation has provoked an outcry from groups concerned about what they perceive as an anti-Latino bias by the candidate, would be making a similar connection, Sharpton said.

“We know him as this brash, bombastic, self-important person. But can he laugh at himself? Can he relate to the average guy in a bowling alley?” posed Sharpton. “I think that he has the opportunity or the risk of establishing that tomorrow night.”

Trump echoed those words earlier this week in an appearance on CNN when he said “nobody gets ratings like me.” He said he initially had been asked to be in a single skit this week, but then Michaels urged him to guest host instead.

NBC has refused to comment on the objections to Trump’s appearance on the show. Earlier this week, “SNL” released several promotional spots featuring Trump, including one in which he refers to a Republican opponent, Ben Carson, as “a complete and total loser.”