Allen Abel: Even for Trump this blatant endorsement of Moore, and his rebuttal of the many women who have accused the former jurist of stalking and groping them, was a thunderbolt 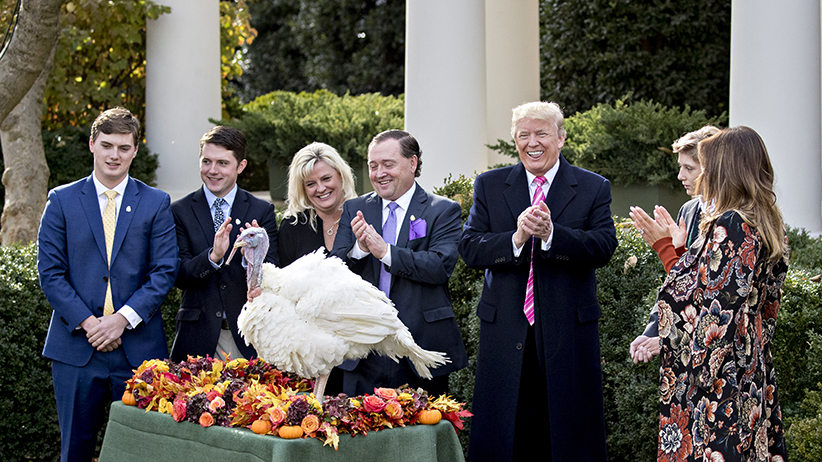 Embattled Alabama Judge Roy Moore joined a brace of Minnesota turkeys as beneficiaries of a Donald Trump pardon Tuesday, leaving Washington to ponder a delicious question on Thanksgiving Eve, 2017: when the time comes, if it comes, who will pardon Donald Trump?

The Trumps will celebrate Thanksgiving at Mar-A-Lago, their gilded Florida cage. But seconds before liftoff from the South Lawn—an enterprise that his obese avian parolees never could achieve—Trump blatantly and repeatedly threw his support behind Moore, overtly accepting his denials of child sexual abuse and teen-age skirt chasing in the 1970s, and declaring that, in reference to Democratic candidate Doug Jones, “we don’t need a liberal person in there.”

Asked if he planned to flutter from Florida to the Heart of Dixie to campaign on Moore’s behalf, Trump said he would announce his plans next week. Even for Trump, this blatant endorsement of Moore, his acceptance of Moore’s denials—and his rebuttal of the manifold women who have accused the former jurist of stalking, seducing, and touching them, a la (allegedly) The Donald himself—was a thunderbolt.

READ: Roy Moore and the hypocrisy of America’s evangelicals

Earlier, in freeing the turkeys, Tuesday’s executive clemency continued a long tradition of selective, seasonal presidential mercy toward domestic poultry. The guest of honour at the Rose Garden ceremony was a 16-kilogram, pink-wattled, slow-waddling Tom named Drumstick. Also in attendance: First Lady Melania Trump, Third Son Barron and First and Second Daughters Ivanka and Tiffany. The latter Trump is herself a rara avis, the only adult child of the president who plays no public role in the nepotistic White House. It was Ivanka Trump who said last week that “a special place in hell” has been reserved for child molesters such as—allegedly—Judge Roy Moore.

The fortunate Drumstick, hand-raised on a turkey farm in Minnesota—the country’s leading producer of turkeys for market—is 20 weeks old. He was selected over dozens of other candidates, including a fellow Broad-Breasted White poult named Bow who, according to the Minneapolis StarTribune, “loves to strut, preen and dance to Tim McGraw and Faith Hill songs.” Phoenix Sheriff Joe Arpaio, the unrepentant scourge of illegal (and some legal) Latino immigrants who was convicted of contempt of court in July, was 85 years young when Trump overturned his sentence in August in his only act of clemency until Tuesday.

The feathered honorees and their entourage were the most visible Minnesotans in Washington on Tuesday. Sen. Al Franken, accused of groping and other inappropriate behaviour by two women, has not been seen in public since last week and has been reported to be hiding at his daughter’s D.C. home. In 2016, Trump lost Minnesota to Hillary Clinton by 45,000 votes out of 2.7 million.

The Dow Jones Industrial Average—often the most accurate predictor of the irascible and impetuous president’s moods—was up 172 points when an unusually jocular Trump took the podium early Tuesday afternoon to commute Drumstick’s death sentence. An understudy named Wishbone, brought to Washington in the event that the First Fowl flew the coop, was not seen during the brief ceremony. Clucking occasionally into a clear November sky, Drumstick evidenced more enthusiasm than the tight-lipped, silent Barron.

“It was 70 years ago,” the president said, “that the National Turkey Federation first presented the National Thanksgiving Turkey to President Harry Truman—who, I might add, did not grant the pardon. He refused. He was a tough cookie. Today, I’m going to be a much nicer president.”

This was a declaration not likely to be seconded by the 59,000 Haitians whose “protected status” was revoked by the Trump administration on Tuesday, the deportees-in-waiting having been accepted as temporary U.S. residents in 2010 after an earthquake killed more than a quarter-million of their countrymen. Two turkeys and an Alabama pariah fared far better.

Still, for even the most blue-blooded, blue-ribbon-winning of turkeys, for most of the past century, an invitation to the White House has been a one-way ticket to the chafing dish. Not until 1989 did George H.W. Bush choose to commute, rather than consume, the bird.

Article II, Section 2 of the United States Constitution gives the president “Power to grant Reprieves and Pardons for Offenses against the United States, except in Cases of Impeachment.” In 1974, when Richard Nixon resigned from office rather than face probable conviction in Congress, this clause allowed Nixon’s unelected successor, Gerald R. Ford, to issue a pardon in an attempt to avert what Ford called “prolonged and divisive debate over the propriety of exposing to further punishment and degradation a man who has already paid the unprecedented penalty of relinquishing the highest elective office of the United States.”

Every president since George Washington—save two men who died within weeks of taking office—has pardoned tens, hundreds, or even tens of thousands of individuals. Truman pardoned a man who had attempted to assassinate him. Bill Clinton pardoned his own brother, who had been sentenced to a year in prison for possession of cocaine. In addition to Nixon, Ford granted amnesty to 50,000 Vietnam-era draft dodgers and issued an unconditional pardon to Robert E. Lee, 106 years after the Confederate commander’s demise.

Trump, by comparison, has been Scrooge, though, depending on the outcome of the several investigations into his campaign’s relationship to Russian agents, he may yet have a long manifest of associates, acolytes, and even family members in need of his constitutional compassion. But none of this could cloud the president’s mood on Tuesday afternoon.

“Upon being pardoned,” Trump announced, “Drumstick and his friend, Wishbone, will live out their days at ‘Gobbler’s Rest’—beautiful place. It’s custom-built; it’s an enclosure on the campus of Virginia Tech. Tremendous school. There, they’ll join Tater and Tot, the two turkeys pardoned last year by President Obama.

“As many of you know, I have been very active in overturning a number of executive actions by my predecessor. However, I have been informed by the White House Counsel’s Office that Tater and Tot’s pardons cannot, under any circumstances, be revoked. So we’re not going to revoke them. So, Tater and Tot, you can rest easy.”

“Are you going to pardon any people?” someone shouted—twice—from the gallery. To this, the 45th president said nothing. An hour later came the response from on high about Moore: “He totally denies it. He says it didn’t happen.”