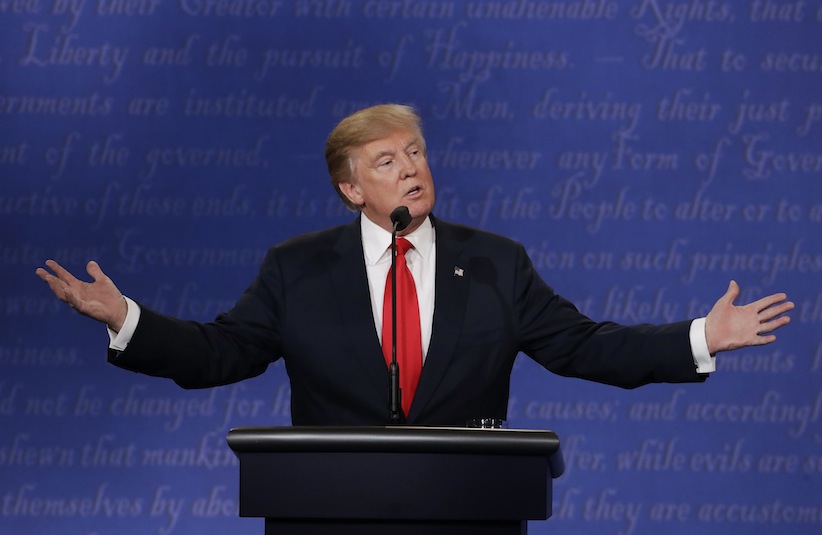 Everyone was ready for Trump to provide some theatrical bang Wednesday night during the third and final presidential debate. It was his last stand, his final bid to convince a nation he was remotely fit to lead. Certainly he’d dragged along a bizarre retinue to sit in the audience, including Barack Obama’s estranged Kenyan-born half-brother, a move seemingly intended to reignite the “birther” nonsense the Republican candidate now blames on Clinton.

What no one expected was that the former reality-TV show would deliver a chilling trailer for political anarchy on Election Day. When asked whether he’d participate in a smooth transition should Clinton win the presidency, he refused to answer: “I’ll keep you in suspense,” he said. The voluntary acquiescence of losers to the electorate is, after all, the foundation of democratic governments. In playing chicken with democracy, Trump transmitted a blaring whistle to his base. Absurd? This is the same candidate who, during the debate, congratulated Vladimir Putin and Bashar Al Assad for being “smarter” than the Obama presidency and Hillary Clinton.

The comment came toward the end of a debate that began without the civility of a handshake. Of the three debates, this outing actually discussed policy, in good part thanks to the stewardship of moderator Chris Wallace of Fox News. Predictably the more disciplined, focused and fact-friendly Clinton had the upper hand, lambasting Trump’s hypocrisy on using Chinese steel in his hotel and hiring illegal immigrants.

Trump started out subdued, like a child told to behave at a funeral. The sniffing that punctuated earlier debates was gone, though he repeatedly sipped water in a weird way, as if trying to prevent his lips from touching the glass. As usual, Trump appeared constitutionally unable to answer a question without making it personal—from complaining about Justice Ruth Bader Ginsberg uttering “inappropriate” criticism of him to boasting about the long list of groups that were endorsing him, once again bragging that federal agency ICE (Immigration and Customs Enforcement) endorsed him when they have not.

MORE: We tracked the debate’s facts and lies—in Skittles

With time, and Clinton’s concerted baiting, Trump’s unspooling began. He raised his voice, interrupting, then mouthing and shouting “Wrong!” at Clinton. The man who likes to say “Nobody respects women more than I do”—a platitude met with laughter from the crowd—showered Clinton in repeated rudeness and disrespect. When about to unbundle an incoherent Trump ramble, Clinton said: “Let me translate that if I can, Chris,” to which Trump responded, “You can’t.” At another juncture, he referred to her as “such a nasty woman.”

Clinton was her usual unflappable self, though one sensed an increasing impatience, a school teacher with an unruly class who can’t wait for the school year to end. Her smile functioned like a Trump lie-detector, lighting up when he said the women who had accused him of sexual assault had been “absolutely debunked,” or denying he’d called some of those same women unattractive or saying he never supported the Iraq War. He also misspoke repeatedly saying that babies were “ripped from the womb” at nine months in late-stage abortions. Clinton, who supports Roe v. Wade, didn’t smile at that.

With less than three weeks to Election Day, any sense of mirth that accompanied the first debate has soured. Listening to the two candidates quibble about the Mexico wall and trade barbs was like listening to a miserable long-bickering couple recycle grievances (Trump: “The one thing you have over me is experience. But it’s bad experience”; Clinton: “Donald thinks belittling women makes him bigger.”) What is clear, and has been evident for weeks, is that Trump is repositioning to an end game that ensures he’ll never be a “loser”; he’s trafficking in conspiracy theories to explain away a potential trouncing—voter fraud, a rigged system (except that part of the system that got him nominated), a corrupt mainstream media in collusion with the Clinton camp.

At one point last night, Clinton asked a question of Trump: “I wonder when he thought America was great.” It deserves an answer, one we’ll never get. What we did get was the harrowing warning that if Donald Trump can’t “make America great again,” he and his disciples will mess with anyone who tries.