By The Associated Press November 5, 2016 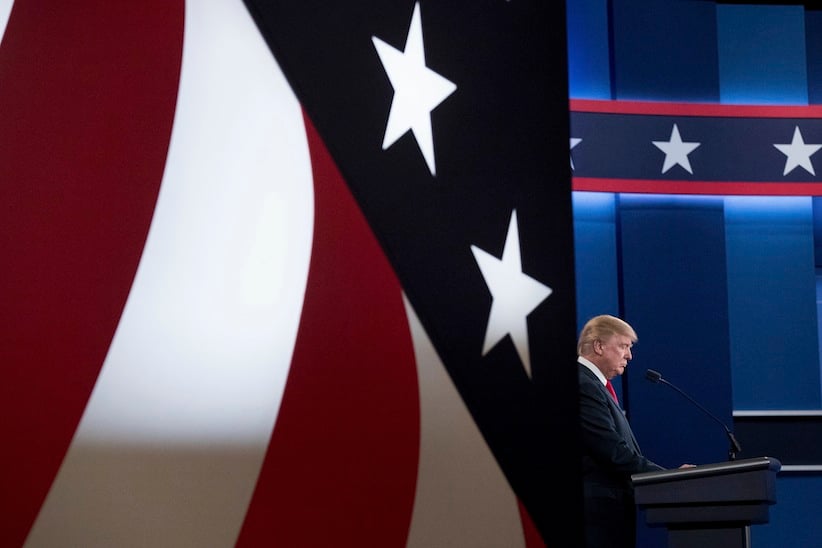 PEMBROKE PINES, Fla. ± Fighting as a party of one, Donald Trump vowed Saturday to press into Democratic strongholds over the campaign’s final days as Hillary Clinton looked to an army of A-list celebrities and politicos to defend her narrowing path to the presidency.

The divisive Republican outsider conceded he was largely on his own _ even as he promised to march into Minnesota, a state that hasn’t backed a GOP presidential nominee in more than four decades.

“Hillary Clinton has all of these celebrities and failed politicians out campaigning for her,” a defiant Trump said in North Carolina, one of four battleground states he was visiting on Saturday. “I just have me, but I have my family.”

At a subsequent appearance in Nevada, a disturbance erupted near the podium in the middle of Trump’s speech. Two agents rushed the Republican nominee off stage after someone yelled “Gun!” the Secret Service said in a statement. The person was apprehended but no weapon was found, the agency said.

Trump returned minutes later and declared, “We will never be stopped.”

“Tonight, I want to hear you roar,” a smiling Clinton said before introducing Perry for a Saturday night performance in Philadelphia.

The final-days scramble highlighted sharp differences between the campaigns in a turbulent 2016 campaign season.

Backed by President Barack Obama and her party’s political elite, Clinton spent much of the last year fighting to unify Obama’s coalition of minorities and younger voters, aided at times by Trump’s deep unpopularity among women in both parties.

Trump has courted working-class white voters on the strength of his own celebrity, having scared off many would-be Republican allies during a campaign marred by extraordinary gaffes and self-created crises. Just four weeks ago, a video emerged in which a married Trump admitted to kissing women and grabbing their genitalia without their permission.

But Clinton has faced extraordinary challenges of her own in recent days after the FBI confirmed plans to renew its focus on the former secretary of state’s email practices. The development is seen as particularly threatening for Clinton in states like Michigan, Pennsylvania and New Hampshire that don’t offer early voting.

At least 41 million Americans across 48 states have already cast ballots, according to an Associated Press analysis. That’s significantly more votes four days before Election Day than voted early in the 2012.

House Speaker Paul Ryan campaigned Saturday alongside Trump’s running mate, Mike Pence _ a rare show of unity, but not with Trump himself.

The speaker encouraged Republicans to “come home” to support Trump in Ryan’s home-state Wisconsin, ignoring for a day his icy relationship with the Republican nominee.

Trump has frustrated party leaders in many ways, particularly by ignoring the hard work that fuels most successful modern-day campaigns.

The Republican outsider has done little to collect data on prospective supporters. He has no significant staffing presence on the ground in key states. And he has been unwilling to invest in a major advertising campaign to keep pace with his Democratic rival.

Clinton’s campaign has spent more than $267 million in television advertising through Election Day. Trump, who claims a net worth of roughly $10 billion, has invested $93 million, according to data collected by Kantar Media.

His entire campaign strategy has hinged on an aggressive schedule packed with massive rallies. The path of his luxury campaign jet has been fueled by somewhat risky ambition at times, however.

Rather than hunkering down in must-win Florida this weekend, Trump flew Saturday to Democratic-leaning territory: Wilmington, North Carolina, then Reno, Nevada, and Denver. And as defiant as ever, he promised to make subsequent appearances in Pennsylvania, Michigan and Minnesota.

Minnesota hasn’t cast its electoral votes for a Republican since 1972. A Republican nominee hasn’t won Michigan or Pennsylvania since 1988.

“We’re going into what they used to call Democrat strongholds, where we’re now either tied or leading,” he said in Florida.

Clinton, meanwhile, announced plans to devote valuable attention to Michigan, another unlikely battleground where both she and President Obama planned to campaign on Monday.

“I know Hillary all of a sudden, she’s making all of these trips, she’s going all over the place. She was supposed to be home sleeping. This is not good for her,” Trump told a crowd at his final rally Saturday night in Denver.

He said Clinton’s campaign must be “worried” as she plans trips to states like Michigan.

Trump may not have Clinton’s celebrity help, but he has relied on his family for public support at times.

On Saturday, he made a rare campaign stop with his wife, Melania Trump, whose appearance came as The Associated Press revealed more details about her early employment in the U.S.

The AP found that Melania Trump was paid for modeling jobs in the United States worth $20,056 that occurred in the seven weeks before she had legal permission to work in the country, according to detailed accounting ledgers, contracts and related documents from 20 years ago.

While showering his wife with affection, Trump also boasted Saturday that he doesn’t need stars to fill his venues.

“We do it the old-fashioned way,” Trump said.