Other presidents have given jobs to family. So why does Donald Trump installing his daughter and son-in-law in the White House raise such ire? 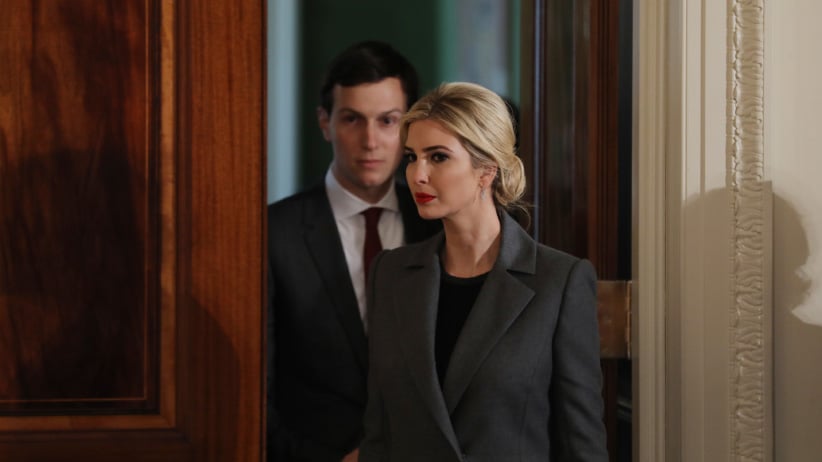 The children beswarmed the West Wing steps and were told to wait for “a surprise guest.” Some were five and oblivious; others were 11 and expectant. Fiery red and yellow tulips were blazing in the Rose Garden. Secret Service sweated in their vests. All the grown-ups had guessed who the guest would be.

It was Take Our Daughters and Sons to Work Day at the White House, and even the offspring of the enemies of the people—truth-tellers, fact-checkers—were invited. There was a tour of the old War Department building, where Abraham Lincoln spent his anxious midnights; a baby-briefing by Sean Spicer (one tyke hit him hard on NAFTA); and even the chance to roll a few balls down the Harry Truman bowling alley, where all the photos of the southpaw Obama had been replaced by the new First Family.

“Is your hair real?” dared one kid.

“Yes,” Trump said softly. Then, brightening: “That’s the first time anybody has asked me that since the campaign!”

The president posed for photos with the children, signed autographs, bantered with the wee ones and promised to deal with that other nuclear family in North Korea. “We’ll get it solved,” he said.

“What do you consider your greatest accomplishment?” one boy asked.

“My kids,” replied Trump. And then he went back inside the Oval Office.

“His hair is yellow!” observed one boy as the president walked away. But a certain 11-year-old girl who had vowed to her father on the subway ride downtown that “If I get close to President Trump, I’m gonna sock him on the nose!” held up Trump’s seismographic scrawl and sighed, “You know, he’s really nice.”

Yet something was missing. Don Jr., Eric, Tiffany, Ivanka, Barron: none of these was with the president as he gaggled with the progeny of the practitioners of fake news. The two older sons had an eponymous empire to run. Son-in-law Jared Kushner was off fulfilling his role as senior adviser to the president. And Kushner’s wife—Ivanka Trump, 35, herself a mother of three, and suddenly the most powerful woman in the world—also was out of sight, stealthily plotting such detestable black ops as working with the World Bank to provide money for women to start their own businesses, speaking in favour of improved access to child care and maternity leave, and dealing compassionately with Syrian refugees.

But the parents of the children outside her father’s office weren’t buying—or printing—a word of this. “Trump’s White House Family Affair Looks A Lot Like the Most Corrupt Nations in the World,” bawled the headline in the Huffington Post. “Only 21% of Young Women Have a Favorable View of Ivanka Trump,” boasted Cosmopolitan.

“The German audience is not that familiar with the concept of a First Daughter,” the editor of a business magazine taunted Ivanka in Berlin in late April, as a skeptical audience cackled, heckled and booed. “I’d like to ask you, what is your role, and who are you representing: your father as president of the United States, the American people or your business?”

“Certainly not the latter,” she responded. “And I am rather unfamiliar with this role as well, as it is quite new to me.” In fact, Ivanka’s role was novel and confusing to most American observers. “I’m not sure anyone knows what to make of either one of them at the moment,” Stacy Cordery, professor of history at Iowa State University, told Maclean’s. “They are not in any sort of mould or model. The president’s relationship with his daughter and son-in-law is completely new.”

There were some precedents: John Adams appointed his son (and future president) John Quincy to ambassadorial posts; Webb Hayes served as personal secretary and bodyguard to his father, Rutherford, in the 1870s; John F. Kennedy put his brother Robert in charge of the Department of Justice, and purists howled then, too.

But Ivanka, rather unmistakably, is a woman. “This never could have happened before today,” Cordery said. “No man would have been credible had he taken advice from his daughter. It would have emasculated him. It would have suggested that she knew more than he did. But today, Trump can say ‘I’ve raised a wonderful daughter who has a good education.’

“What makes people unhappy is that we don’t know what her job actually is. Does she spend 20 minutes a day with her father, or two hours a day? We don’t have the logs.”

“I am friends with other children and grandchildren and great-grandchildren of presidents, and we all say the same thing,” mused Clifton Truman Daniel, author, journalist, actor and grandson of Harry Truman. “You have a twofold job—one, to preserve your ancestor’s legacy, and two, to try to use your powers—I almost sound like a superhero here—you try to find a way to use your powers for good.”

Daniel has been involved in humanitarian work in the cities of Hiroshima and Nagasaki. He was not yet born when his grandfather made the decision to obliterate these places with the new atomic bomb. That is how Daniel has tried to use his powers. Now we see Ivanka Trump taking hers to the West Wing and the World Bank, while liberals jeer.

“People have been using the word ‘unprecedented,’ ” Daniel said of Ivanka. “We’ll see how that turns out, but when it comes to the Trump kids, I’m a little surprised. They have no background in governing, no experience in the political arena whatsoever. You’d want to know that they at least had studied this, or had worked in the field, had worked for senators or governors.”

“Given the velocity and the ferocity of the venom, it’s going to be hard for Ivanka to prove herself,” said Connie Morella, 86, who served eight terms in the House of Representatives as a liberal Republican from Maryland. “But I’m a feminist, and she is a feminist, or least she avows herself to be, and I’m rooting for my country, and I’m rooting for women’s issues.”

Morella, who now serves as ambassador-in-residence at the Women & Politics Institute at American University in Washington, raised nine children—three of her own, and six nieces and nephews after her sister passed away. “Nine kids,” she said, “and I did not have any of them advising me.”

“I think [Ivanka] can overcome that,” Cordery said, “if she becomes the voice of the conscience of the administration, the one critical voice her father hears, a credible person who says to her father, ‘Wait, Dad. Listen to another voice. Let’s bring other people to the table.’ ”

Any moment now, someone is going to file a lawsuit alleging that it is an illegal conflict of interest for Trump to give his own daughter (and her footwear and clothing line) a desk in a government building. Stir this into the cauldron of boiling liberal rage against all things Trump, and Ivanka may be in for a rough ride. Where will this end?

“Let’s start with legally,” suggested Gerard Magliocca, a professor of law at Indiana University. “From my point of view, there is no legal obstacle to having your children or in-laws work for you on your staff as president. The president has broad authority to choose who can work on his or her staff.

“So then, optically, what is it about nepotism that people don’t like?” Magliocca mused. “First, you could say that they’re just unqualified. Nepotism means no qualification other than birth. You can see that being offensive to the idea that everyone has equal status, which is sort of an American ideal. Second would be something like conflict of interest, like they’re not divorcing themselves from the family business.”

There was another dimension, too—a long-standing American aversion to princelings (and now princess-lings) as a threat to republican government. “One reason that people were confident in George Washington being president was that he didn’t have any children, so there was no danger of a dynasty,” said Magliocca. “There must have been people in Canada who criticized Justin Trudeau as well—who said he’s unqualified except because of his birth. But at this point, he doesn’t look like a total stooge.”

On Take Our Daughters and Sons to Work Day at the White House, it was much too late to urge celibacy on Donald Trump. As Will Rogers quipped in the 1930s, “I bet after seeing us, George Washington would sue us for calling him ‘father.’ ”