Donald Trump to Great Faith Ministries: 'I am here to learn'

By The Associated Press September 3, 2016 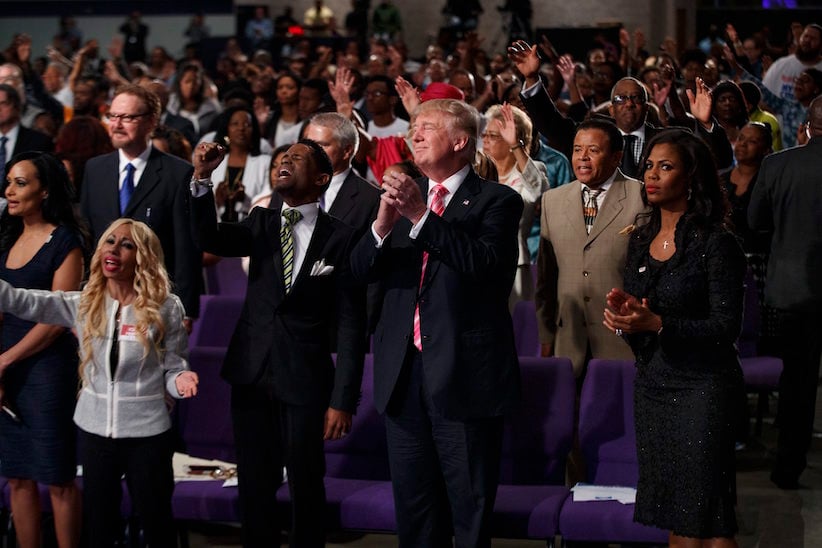 DETROIT — Donald Trump swayed to songs of worship, read scripture, and donned a Jewish prayer shawl Saturday during a visit to a predominantly black church in Detroit, where he called for a “civil rights agenda of our time” and vowed to fix the “many wrongs” facing African-Americans.

“I am here to listen to you,” Trump told the congregation at the Great Faith Ministries International. “I’m here today to learn.”

Trump has stepped up his outreach to minority voters in recent weeks as he tries to expand his appeal beyond his GOP base. The visit was Trump’s first to a black church — a rare appearance in front of a largely minority audience for the candidate who typically attracts overwhelmingly white crowds.

Trump was introduced by Bishop Wayne T. Jackson, who warned that he was in for something different. “This is the first African-American church he’s been in, y’all! Now it’s a little different from a Presbyterian church,” he said.

While protesters were a vocal presence outside, Trump made a pitch inside for support from an electorate strongly aligned with Democrat Hillary Clinton.

“Our nation is too divided,” said Trump, who is known for making contentious remarks. “We talk past each other, not to each other. And those who seek office do not do enough to step into the community and learn what is going on.”

Striking a rare unifying tone, he said, “I’m here today to learn so that we can together remedy injustice in any form.”

Trump also praised the black church as “the conscience of our country” and said the nation needs “a civil rights agenda of our time” that includes the right to a quality education, safe neighbourhoods and good jobs.

“I fully understand that the African-American community has suffered from discrimination and that there are many wrongs that must still be made right,” Trump said.

Before he left, he was presented with a prayer shawl, which Jackson draped over Trump’s shoulders, and a Jewish Heritage Studies bible. Trump also met with a smaller group of church members and recorded an interview with the pastor.

Trump’s efforts thus far to attract greater support from minority groups have largely fallen flat. Polls show Clinton with overwhelmingly more support from blacks and Hispanics. African-American community leaders, in particular, have railed against Trump’s dire depictions of minority life and dismissed his message as intended more to reassure white voters that he’s not racist than to help communities of colour.

Outside the church, several separate protests swelled into a throng of about 400 people denouncing Trump. At one point, the protesters tried to push through a barrier to the parking lot but were stopped by church security and police.

Rev. Lawrence Glass, one of the clergy denouncing Trump’s visit, said Trump represents the “politics of fear and hate,” and “minorities of all kinds have much to lose taking a chance on someone like” Trump.

Emery Northington, 42, who works in auto sales, said that Trump “doesn’t have my best interest in hand.”

But inside, churchgoers who chose to attend Trump’s speech speak said they thought it was important to hear directly from the Republican nominee as they weigh their options.

“I’m here to hear what he has to say,” said Milton Lewis, 46, who works as a minister at another church.

“I have a very open mind,” echoed Pierre Curtis, 69, a Great Faith Ministries International congregation member for more than 20 years.

After the church visit, Trump made a brief stop at the southwest Detroit childhood home of Ben Carson, the retired neurosurgeon who ran against Trump in the primaries and is now advising the campaign.

Surrounded by security and a swarm of reporters, Trump spoke briefly with the home’s current owner, Felicia Reese.

“Your house is worth a lot of money,” he told her, thanks to the Carson connection.

Carson told The Associated Press before the trip that it would serve as an opportunity for Trump to see the challenges residents face as he refines his policy plans.

“It always makes much more of an impression, I think, when you see things firsthand,” Carson said.

Detroit is about 80 per cent black, and many are struggling. Nearly 40 per cent of residents are impoverished, compared with about 15 per cent of Americans overall. Detroit’s median household income is just over $26,000 _ not even half the median for the nation, according to the census.

In an interview with NBC’s “Meet The Press” Saturday, Pence said he plans to release his tax returns next week, and said Trump’s long-awaited tax returns are also coming. He echoed Trump’s promise that he will release his taxes upon the completion of an ongoing audit.