Donald Trump waged war against the media. And won.

Donald Trump's contempt for facts and the free press was rewarded in the U.S. election. Now what? 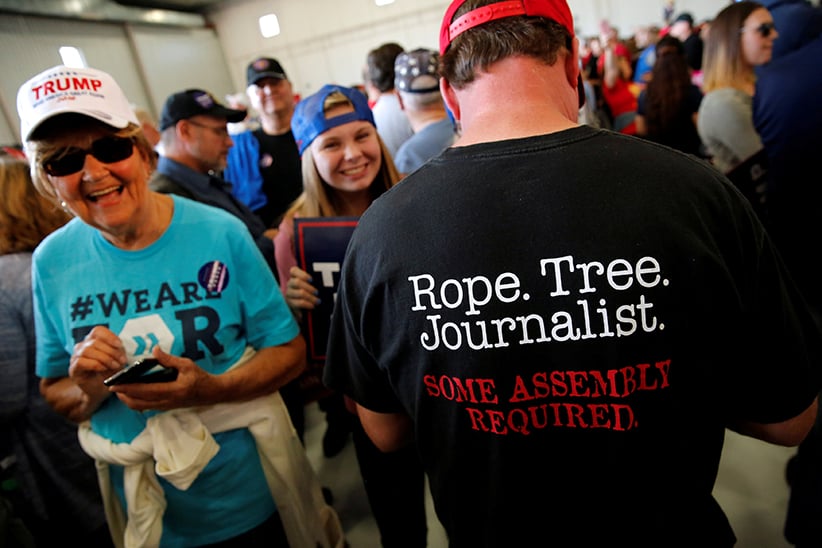 Imagine sitting in the middle of a packed political rally, in a tiny area cordoned by a rickety security barrier, and hearing a U.S. presidential nominee order thousands of people to “Turn around! Look at them!” and realizing you are one of the villainous “them.” Staring down media—“dishonest,” “scum,” “horrible people,” “so illegitimate,” to quote Donald Trump—became a Trump rally ritual; I felt it in Novi, Mich., last month. And even more harrowing than the threat of physical violence was watching people who had been friendly and thoughtful during interviews only an hour earlier transform, on instruction, into a snarling, booing mob. The odious target at Novi? Half a dozen TV cameras and a handful of journalists, including a 15-year-old next to me reporting for the local high school paper.

Trump’s contempt for the Fourth Estate, the entity that abetted his rise, made “the media” itself a story this U.S. electoral cycle, one without a happy ending. Trump managed to prevail showcasing the increasing irrelevance of old-school media whose coverage served to normalize the candidate’s outrageous racism, misogyny, xenophobia and rejection of human civility. A swath of the American public who voted Trump into office have come to regard the media as a tool of a corrupt Establishment and therefore rightful target of hate. That was evident in the message a T-shirt recently worn by a Trump supporter that called for lynching of reporters trying to do their jobs: “Rope. Tree. Journalist. Some assembly required.”

Trump’s contempt for “media”—specifically “biased liberal media”—reflected his thin skin, his refusal to be held accountable, and his rejection of basic democratic tenets, of which a free press is a pillar. Never mind that “media” is so diverse in platforms and perspectives to be almost meaningless as a collective noun. His campaign painted it as a cabal capable of suppressing the false claim that thousands of American Muslims publicly rejoiced in New Jersey after 9/11. Early on, Trump banned outlets who criticized him, including the Washington Post, Politico and BuzzFeed, a fatwa withdrawn in September. Trump deftly exploited what’s breezily dubbed a “post-factual world view,” paved by the rise of Facebook and Twitter as “news” hubs and buttressed by trust in the Internet, a web of confirmation bias. Trump ignited his base by appealing to his 13.1 million Twitter followers (Hillary Clinton has 10. 4 million)—employing white supremacist imagery in one infamous example—confident mainstream media would give it traction. And it did. The more incendiary, the more coverage. The attention was estimated to be worth $2 billion to the campaign, free of charge.

Trump portrayed media alternately as irrelevant (“It doesn’t matter as much, like it used to matter,” he told Dr. Oz in September) or a powerful cog within a corrupt establishment capable of blocking his path to the White House: “The election is absolutely being rigged by the dishonest and distorted media pushing Crooked Hillary,” he tweeted last month. (It’s a message he’s sure to dial back after his victory.) He promised retribution: “We’re going to open up those libel laws.” Trump would prove a gold mine of sorts to an embattled press happy to report the presidential nominee’s delight at its own decline: “The reporting at the failing @nytimes gets worse and worse by the day,” Trump tweeted this summer. “Fortunately, it is a dying newspaper.”

In the face of an unprecedented campaign, many outlets were slow—or unable—to contextualize Trump for what he was: a demagogue fronting an alt-right movement. Yet it was in plain sight: the sexism that animated his campaign was evident early in remarks made to Fox’s Megyn Kelly and his targeting of NBC’s Katy Tur; he mimicked and mocked a disabled reporter, displaying a lack of human decency once unimaginable in a presidential candidate. The anti-Semitic tropes seen in the final Trump campaign ad were foreshadowed by online threats targeted at Jewish reporters by Trump supporters that included publishing their addresses and personal information, aka “doxxing.” After a Jewish reporter published an unflattering profile of her Melania Trump suggested the ensuing online hate speech had been “provoked”; the attacks would play out in real time toward the campaign’s end when a Trump supporter chanted “Jew-S-A” at the media pool.

MORE: How will the market respond to a Trump win?

It’s quaint now to recall that in July 2015, Huffington Post chose to cover Trump as “entertainment” not “politics,” a decision reversed after his call for a Muslim border block. In the spirit of objective reporting, Trump’s preposterous statements were reported straight-faced: his slandering a Mexican judge, his decrying “elites,” his identifying as an “outsider” as a billionaire real-estate tycoon, his thinly veiled calls for violence against his opponent. A bid for “balanced” reporting gave rise to false equivalency, with disproportionate focus on Clinton’s emails, even after the FBI all-clear. This week, her lawyers sent out “cease and desist” letters to outlets continuing to repeat falsely she was “under investigation by the FBI.” Meanwhile, Trump’s connections with Russia remain only partly plumbed.

The upshot, paradoxically, would be renewed recognition of the value of fact-based investigative journalism, with outlets with resources to dig rewarded. The Washington Post exposed the Trump Foundation’s “self-dealing,” Trump’s corrupt business practices and allegations of fraud at Trump University. Forbes unravelled Byzantine conflicts of interest at the Clinton Foundation, and the Toronto Star’s Daniel Dale became a breakout star for doggedly fact-checking Trump, then itemizing the lies. Through it, however, many die-hard Trump supporters don’t care one whit. In Novi, whenever I asked Trump supporters the source of wild assertions about Clinton, there had a stock answer: “It’s on the Internet.”

Not that a Clinton presidency would have been be a press picnic. Her frosty relationship with media dates to her husband’s presidency. Clinton went some 270 days during the campaign without holding a press conference; she finally took questions from journalists travelling with her in September. Neither nominee travelled with a “protective press pool”—a set group of reporters who share information—a tradition for presidential candidates to aid transparency.

Tellingly, to prevent Trump from rambling off script, as he is wont to do, in the last days of the election, his handlers took away the tool behind his rise: access to Twitter. It was how he spoke directly to his followers, and the millions more who cast their votes for him, a tribe who awarded him on Tuesday. What the tenor of his first 140 characters Tweeted to the nation he now governs remains to be seen.