Trump wins an election that wasn't about choices, after all

U.S. election night revealed two Americas. The one that believes in an American dream for all was in the minority. 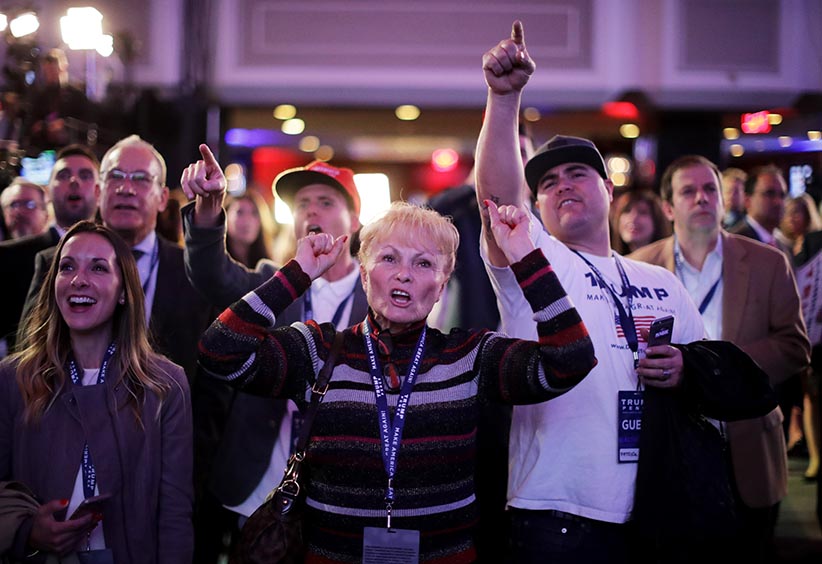 This was not an election, it was a census. Elections are about issues and choices, but this year there wasn’t much of either.

There was no clash of ideas. During their evening news broadcasts, the major TV networks devoted only 32 minutes to substantive coverage of either candidate’s platform throughout the entire campaign. And perhaps even that was too much. Trump offered precious few details about how he was going to make America great again. And even those particulars disappeared as his campaign marched on and his message became more and more vague. The night before the election, Trump simply told his supporters a vote for him would “make every dream you’ve ever dreamed… come true.”

And, truthfully, few voters made actual choices. After the Republican and Democratic conventions in July, the aggregate polling numbers for both Trump and Clinton were remarkably firm. The odds of who would ultimately become president swung wildly, due to subtle shifts in certain key states, but overall, the headcount for both candidates remained roughly the same, always within only a few percentage points of each other.

No, this vote was decided by identity. This was a census that measured the size of two very different and very distant Americas. The first is a nation composed of those who believe America is still great. This included lower-income voters who know welfare programmes and health insurance aren’t abstract policy ideas, and they could only vote for someone who promised to protect them. It included African Americans, who rightly feel the country has a long way to go, but still value the hard fought gains of the civil rights movement, and could only support a candidate who feels the same. And it included Latinos who could never support someone who emphasized race over citizenship and who promised to stop immigration.

The second group being counted was those who believe America’s best days are behind it. These are people who are fundamentally scared. On the surface, they might be doing well, with a job and a big house. But they’re worried new trade deals or more taxes could take it all away. They are also less educated, and feel threatened by an economy with fewer factory workers and more programmers. They are overwhelmingly white; and they are concerned immigration will eventually make them a minority in their own country. This group blames “the establishment” for taking America down the wrong road and they are so demoralized about the state of the nation, they could only support someone who promises to tear down the status quo.

So, tonight the census results came in, and they found that more voters fell into the second category: people fearful of modern America in all its liberty and diversity. Those who still believe in an American dream for all, this was the minority.

Over the last few decades, U.S. political races have increasingly become less about democracy and more about demographics. When Mitt Romney lost the last presidential election, the Republican post mortem warned that the party needed to expand its base. Trump himself had views on this and predicted that without immigration reform, the party was doomed in 2016.

But Trump changed his mind and decided he didn’t need to widen the base, he needed to deepen it. He began in his very first speech, announcing his candidacy, by vilifying Latinos. He described Mexicans immigrants as criminals and rapists, and it went downhill from there. His gambit worked. He won the vocal support of the KKK, and the silent support of enough Americans to give him the White House.

A lot of people will be saying a house divided cannot stand. The shock of a Trump presidency will have many declaring the end of the American experiment. And there are reasons to fear this. These two Americas live in different worlds, have different values, and increasingly live separate lives. And the men and women they send to Washington reflect this. Bipartisanship is at a historic low, and the scorched earth campaign of Trump will make it even worse. There are bad days ahead.

But, America has seen bad days before. When Abraham Lincoln was elected, he faced a divided nation too, one on the brink of civil war. He ended his inaugural address with a plea that is as relevant today as it was in 1861:

“We are not enemies, but friends. We must not be enemies. Though passion may have strained it must not break our bonds of affection. The mystic chords of memory, stretching from every battlefield and patriot grave to every living heart and hearthstone all over this broad land, will yet swell the chorus of the Union, when again touched, as surely they will be, by the better angels of our nature.”

I promise you, eventually, Americas will once again be touched by the better angels of their nature.