Daily Trump Tracker: The president has a turn of phrase he’d like to sell you as two Midwesterners get called up to D.C. 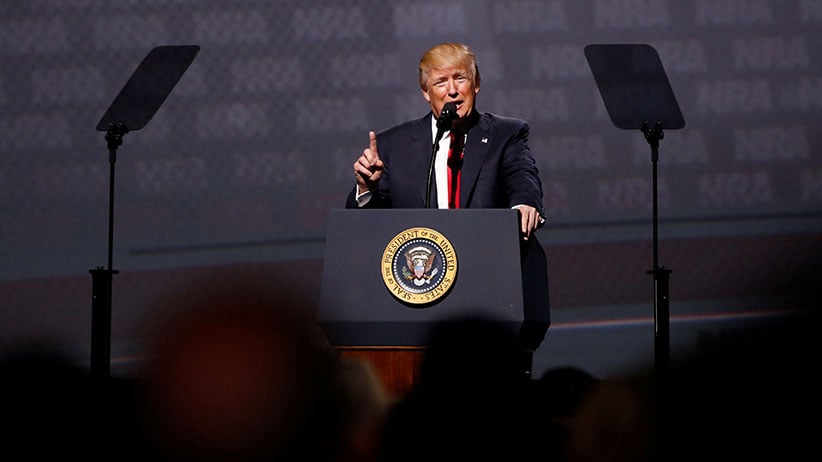 Trumpian economics
“John Maynard Keynes is an example of a person who’s done an amazing job and is being recognized more and more, I notice,” would be another way of reading the president’s thoughts on deficits as expressed in an interview with The Economist published today. “The fake news Merriam-Webster Dictionary says the expression ‘priming the pump’ dates to the early 19th century, but many people are saying I came up with it a couple of weeks ago.”

Playing at toy soldiers
Like any self-respecting Baby Boomer, the president doesn’t quite trust this whole technology thing. So when he found out the USS Ford-class aircraft carriers were using “digital” to throw hundred-million-dollar planes into the sky, he wasn’t having it. “You [are] going to [use] goddamned steam,” Trump says he told someone within hearing range.

We’ll find you a job somewhere in Washington
In October, Mike Lee didn’t deem Merrick Garland fit to be a Supreme Court Justice, but in the surprisingly cold light of May he thinks he’d make a fine FBI director. The Utah senator tweeted his recommendation today; as a member of the judiciary committee, he’d be sitting across the hearing room from the Illinois-originating judge if the president were to tap him for the vacancy, an opportunity Lee denied himself when he helped scupper president Barack Obama’s SCOTUS pick.

If I would have known…
The president became the latest member of his team to meet with top Russian officials when he hosted Vladimir Putin’s foreign minister and ambassador to the U.S. at the White House yesterday. Given the proximity to Trump’s defenestrating of former FBI director James Comey, the administration was understandably sensitive about the message the gabfest would send. So they were shocked, shocked to find out that their guests had tweeted images of the encounter.

Today in executive orders
A new commission investigating voter fraud and suppression, which is reportedly set to be vice-chaired by Kris Kobach. You may remember Kobach as the man who carried his pitch to head the Department of Homeland Security on the outside of his leather document portfolio, putting in full view his plan to thought-police and track non-citizen Muslims and build The Wall. (He didn’t get the job). Or you may remember him as the source cited by presidential surrogate Stephen Miller as having evidence of voter fraud in the recent presidential election, which enabled Kobach to put his suspect math skills—six cases he filed in Kansas somehow turned into hundreds of thousands of instances across the country—on display. Thank goodness the Donald found a role for him in the administration—heaven forfend his talent for voter suppression go to waste.