Trump's order aimed at cutting government red tape follows Canada's successful example. Surely, we can give him credit for that. 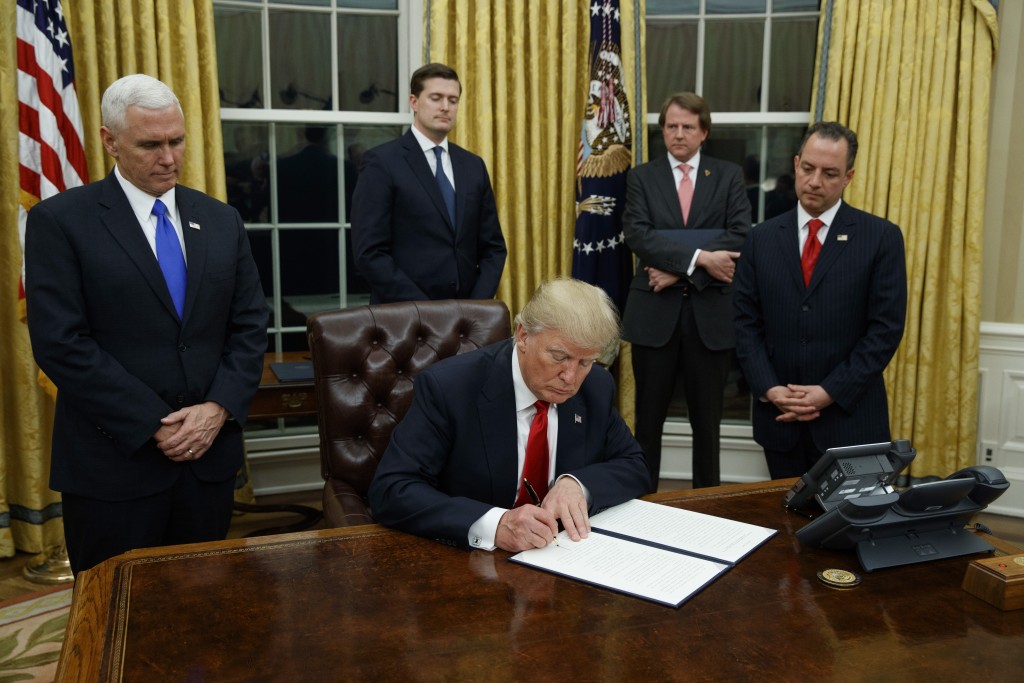 A broken clock is right twice a day.

Even a blind squirrel finds a nut once in a while.

Not all executive orders signed by President Donald J. Trump are bats–t crazy.

We may need a new aphorism for American politics.

While “Reducing Regulation and Controlling Regulatory Costs” has received far less attention than the president’s other executive orders, such as a controversial 90-day visa ban on people from seven predominantly-Muslim countries, Trump’s plan to cut red tape is actually a very good idea. And he’s copied it from Canada.

This executive order requires all federal agencies and departments to eliminate two regulations for every new regulation they impose. Since it emanates from the Trump White House, however, what attention it has received is universally negative. Earlier this week, Maclean’s contributor Paul Boothe derided the plan as “overly simplistic” and likely to fail because it wasn’t properly based on Canadian experience. That’s unfair criticism.

Regulations, policies and other bureaucratic requirements inexorably accrete in any modern economy. Some rules are obviously necessary to protect public health, welfare and the environment, but there’s no coordinated way to ensure the vast bulk of these requirements create a net benefit for society, either singly or in their entirety.

The Canadian Federation of Independent Business has been campaigning for years on the need for regulatory common sense in Canada. As part of its annual Red Tape Awareness Week, the small business lobby group recently highlighted a few egregious examples of regulators gone wild. Nova Scotia’s labyrinthine employment standard regulations, for example, require minimum wage earners to be paid exactly to the minute while other wage earners are to be rounded to the nearest half hour. “Even the most sophisticated payroll systems can’t make this calculation,” the CFIB reports. Meanwhile the town of Smithers, B.C., forced a developer to build a $10,000 length of sidewalk at the end of a dead-end street, simply to satisfy existing regulations. Regulatory leviathan is also the reason the community bake sale is all but dead.

Despite plenty of grimly humourous tales of regulatory excess, however, Canada is actually at the forefront of a global movement to improve the situation. As Boothe points out, since 2012 the federal government has had a one-for-one regulatory reduction program. Every new bit of red tape must be “paid for” with the elimination of an existing, equivalent burden. In 2015 this requirement was enshrined in federal law; we’re the only country to mandate regulatory reform in this way.

As a practical matter, Ottawa’s rule entails more than just striking one old regulation off the books every time a new one is written. Rather, regulatory burden is measured as the cost of complying with new government obligations—filling out forms and the like. If a new cost is added, reductions freeing up an equivalent sum elsewhere must be enacted within two years. Regulations that apply to the financial sector, taxes or foreign policy are generally exempt. Federal sanctions on Russia in retaliation to its incursion into Ukraine, for example, did not trigger a reduction in sanctions on other countries.

As a result of Ottawa’s one-for-one rule, car manufacturers have saved $1.5 million due to changes in the way they report on imported cars. The fishing industry saved $152,000 after the elimination of archaic rules on labelling fishing gear and vessels. Total savings to Canadian businesses since 2012 are estimated at $30 million.

“This may sound like small potatoes,” says Laura Jones, executive vice-president of CFIB. “But it is a huge issue with small business. We can’t keep piling up more and more rules without some subtraction.” While there’s more to be done, Jones considers Canada’s efforts at reining in regulatory excess evidence of a “remarkable culture change.” Rather than simply coming up with more and more rules, bureaucrats and politicians must now live within constraints and consider the costs of their actions. “This is a low-cost way to give business owners extra time and money to invest back in their businesses,” she says.

And despite Boothe’s claims to the contrary, Trump’s proposal is strikingly similar to Canada’s efforts. “Any new incremental costs associated with new regulations shall,” reads the executive order, “be offset by the elimination of existing costs associated with at least two prior regulations.” The focus is thus on overall regulatory costs, exactly as Canada has done. Surely we can give Trump credit for getting some things right, especially when he’s following our lead.

Of course Trump being Trump, his proposal is twice as big as our worthwhile Canadian initiative. If a one-for-one reduction is a good idea, is two-for-one better? It depends on your view of government. Canada’s approach seeks to maintain the regulatory status quo, while Trump’s plan aims to cut it significantly. CFIB’s Jones points out British Columbia successfully used a two-for-one rule to dramatically reduce the burden of provincial regulations, and then later switched to a one-for-one plan to maintain those gains. Jones calls B.C.’s cut-and-cap approach “the gold standard.”

Then again, don’t tell Trump that Britain recently enacted its own three-for-one regulatory reduction rule. If Trump wants to stay on top of this heap, he’ll have up his game bigly.