Donald Trump’s bromance with autocrats only empowers them

Trump has revealed a tendency to appreciate some of the world’s worst leaders—Erdogan, Gadhafi, Putin, Saddam—and that’s a serious problem 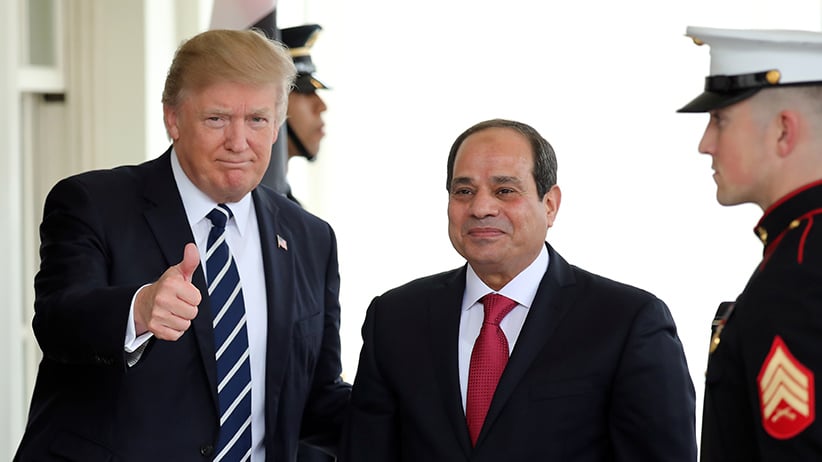 As odious and offensive as he may be, Donald Trump is not an authoritarian. While the president displays authoritarian tendencies—the cult of personality he tries to cultivate, the demonization of his enemies, the threats against the media, the (probable) use of his office to enrich himself and his family—it would be an exaggeration and mis-categorization at this point to seat him at the nasty-authoritarian-and-evil-dictators table. And yet, Trump has shown a fondness for some of the world’s most offensive strongmen that betrays an affinity that ought to concern us.

Earlier this week, Trump expressed an interest in meeting North Korean dictator Kim Jong-un, admitting that he would be “honoured” to meet with the oppressive leader “under the right circumstances.” A few days before, Trump complimented Kim as “a smart cookie” and noted the difficulty of taking over a regime at the tender age of 27, as he had upon the death of his father, Kim Jong-il, in 2011. As odd as these comments are, they’re not out of character for Trump.

In April, CNN ran a piece that highlighted Trump’s praise of dictators and authoritarians. The article was written in the aftermath of Trump’s congratulatory phone call to Turkish president Recep Tayyip Erdogan, who had just won a referendum that undermined Turkey’s democratic institutions and extended his own power. Earlier, Trump gave Erdogan “great credit” for his crackdown on dissidents in the aftermath of a failed coup. The American president’s laudatory impulses have, in the past, also been extended to Russian president Vladimir Putin (“better than Obama”); Egyptian president Abdel Fattah al-Sisi (“fantastic guy”); the former, since executed, president of Iraq, Saddam Hussein (“He killed terrorists. He did that so good. They didn’t read them the rights. They didn’t talk. They were terrorist. Over. Today, Iraq is Harvard for terrorism”); and the former, since killed, Libyan president Moammar Gadhafi (“We would be so much better off if Gadhafi were in charge right now.”).

Granted, Trump’s conditional support for Gadhafi and Hussein is based on the argument that part of the ongoing instability in the Middle East is due to the removal of these autocrats who had, ahem, “kept the peace” in their countries—never mind that each man was a repressive despot who robbed, abused, and murdered his own people and supported terrorists when it was expedient to do so. The president likely didn’t dig too deeply into the history of either regime. No, Trump doesn’t seem like much of a reader. I don’t imagine him staring out the window or gently closing his eyes in contemplation, either. He just feels and speaks.

Shortly after his inauguration as the 45th president of the United States, Trump received some unusual support. The New York Times ran a story in February with the headline “Authoritarian leaders greet Trump as one of their own.” The piece included Kim, Putin, Philippine president Rodrigo Duerte (who has since been invited to the White House), Kazakhstan autocrat Nursultan Nazarbayev, el-Sisi, and Ergodan, each of whom expressed some degree of relief or support at Trump’s election, indicating that he is the sort of president with whom they can work.

If it’s true in life that you can judge a person by their friends, the parallel truth in politics is that you can judge a leader by the sorts of counterparts who praise him or her. While the United States has a long history of supporting violent, repressive regimes, it remains unusual for there to be a public club of despots backslapping the president of the United States—and even more unusual for the diplomatic equivalent of fondness to be reciprocated by the man who enjoys the tired moniker of the “leader of the free world.” As morally dubious as the history of American geopolitics may be, Trump’s authoritarian bromance is a macabre mutation of that legacy.

READ MORE: How American democracy could slowly fade away

Trump’s relatively warm relationship with an international coterie of strongmen betrays his Mussolini-esque obsession with authority, bombast, and the sense that things are getting done. Note the similarities shared by the men for whom Trump shows a semi-coy fondness: they demand control, place themselves above the rule of law, and claim that it’s all in the name of order. How else will the trains run on time?

Yet, as president of the United States, Trump is meant to be a symbol for something wholly different: for justice, rights, and freedom. Bracket for a moment the disturbingly mixed record of American achievement when it comes to these commitments, at home and abroad, and try to appreciate the value that comes with the world’s most powerful country making a formal commitment to them and to realizing some measure of each, both domestically and internationally. At the very least, try to appreciate that it’s better for the American head of state and government to—at least symbolically—categorically resist men who are counted among the world’s most sinister autocrats.

Important signals and norms emerge when the leaders of the world’s top democracies criticize and call out the leaders of the non-democratic world. When the American president gets too chummy with these people, at least publicly, signals get mixed and stabilizing norms become challenged, all of which raises the possibility of a dangerous shift in the global order that undermines efforts to resist thugs on the world stage. The American president does not have to be an authoritarian himself to support and normalize such an approach to governing: an honorary membership in the autocrats’ club might be enough.