A recap of the tycoon's debate performance: Heavy on the bluster. Light on the specifics. 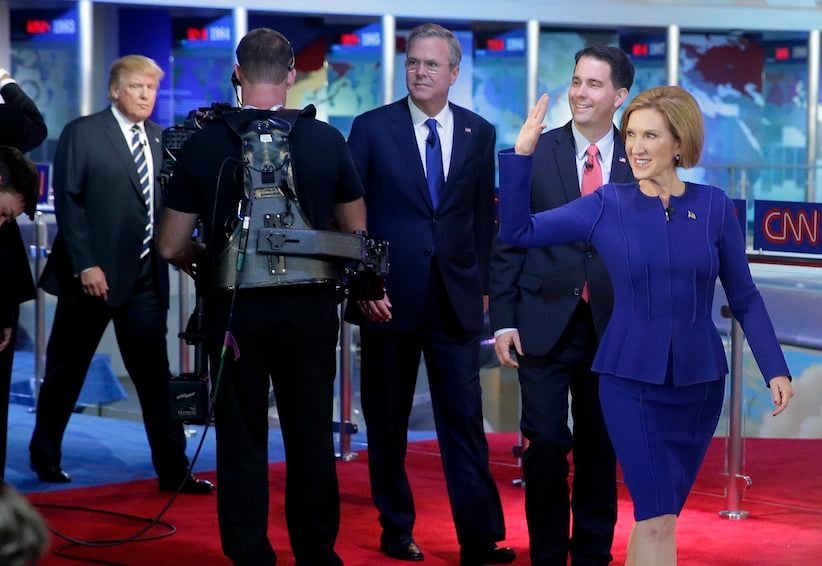 WASHINGTON — Of the roughly 260 sentences Donald Trump spoke in the Republican presidential debate Wednesday night, the tenor of the evening was captured in his closing remarks.

Asked how the country would change under his presidency the primary-poll frontrunner heralded his own limitless potential: “We’ll make this country greater than ever before. We’ll have more jobs. We’ll have more of everything.”

Heavy on the bluster.

Light on the specifics.

It was a theme of the evening, as it has been throughout his entire presidential run. Amid all those phrases, Trump bragged about himself roughly 19 times.

About his profits in Atlantic City, his temperament, his book, his TV show, and he set the tone at the very start when candidates were asked to introduce themselves: “I’m Donald Trump. I wrote ‘The Art of the Deal.’ I say, not in a braggadocious way, I’ve made billions and billions of dollars.”

About 10 times, he delivered an insult.

Trump questioned why Sen. Rand Paul was allowed in the debate, appearing to poke fun at his looks; he suggested former New York governor George Pataki couldn’t get elected dog-catcher; and called George W. Bush’s presidency so disastrous the Republicans could have run Abraham Lincoln in 2008 and still lost.

When it came to offering solutions, however, his numbers were more meagre.

Four — that’s the number of times Trump spoke about ideas that might help the country.

One was when he appeared to link vaccines to autism, and he proposed making doses smaller. That prompted a retort from his closest anti-establishment rival, who happens to be a neurosurgeon: “He’s an okay doctor,” Ben Carson said of Trump.

“The fact of the matter is, we have extremely well-documented proof that there’s no autism associated with vaccinations. But it is true that we are probably giving way too many in too short a period of time.”

The other solutions Trump offered were: a border wall with Mexico, keeping the military out of Syria, and a progressive tax system that hits the wealthy.

That cornucopia of policies illustrates the unique role he’s playing in his party, as an ideological chameleon with positions drawn from various points on the political spectrum:

Conservatives love his Mexican-wall idea — polls suggest more than 70 per cent of Republicans favour it.

His tax ideas might be a tougher sell in this primary. While more than 60 per cent of Americans would raise taxes on the rich, according to different surveys, that figure includes only 29 per cent of Republicans according to one recent Gallup survey.

Trump promised to release a policy in two weeks that will lower middle-class rates and squeeze the rich: “The hedge fund guys won’t like me as much as they like me right now. I know them all, but they’ll pay more,” he said. “I know people that are making a tremendous amount of money and paying virtually no tax, and I think it’s unfair.”

— On foreign policy, he certainly wouldn’t belong to his party’s more hawkish wing.

He said he’d get along with Vladmir Putin in the interest of a more stable world, and as for fighting the so-called Islamic State he said: “Why are we fighting ISIS in Syria? Let them fight each other and pick up the remnants.”

He was facing a less-than-friendly crowd.

Unlike the audience that guffawed at his shtick in the first debate, the crowd Wednesday sat in stony silence through his jokes.

Like when he told the George W. Bush-and-Lincoln joke, they sat on their hands then cheered wildly when the last president’s sibling, Jeb, retorted: “As it relates to my brother, there’s one thing I know for sure. He kept us safe.” While the audience cheered, that defence of the 43rd president drew many puzzled reactions in social media referring to 9-11.

But the audience and the online pundits appeared to agree on one thing: Carly Fiorina.

Universally hailed as the winner in a previous debate involving also-ran candidates, this time the former Hewlett-Packard CEO graduated to the prime-time stage.

Fiorina easily rattled off four things she’d do to contain Russia: “Having met Vladimir Putin, I wouldn’t talk to him at all,” she said, proposing a rebuilding of the Navy’s Sixth Fleet in Europe, a missile shield for Poland, military exercises in the Baltics, and thousands more troops based in Germany.

She twisted in the knife when asked to respond to a wisecrack Trump had made about her face. She turned a phrase from Trump on its head, concluding with the terse punchline, “I think women all over this country heard very clearly what Mr. Trump said.”

People did laugh at Trump’s joke at the end. Candidates were asked to choose a hypothetical Secret Service presidential codename for themselves.