His verbal nonsense is turning the U.S. into a version of China—a place where little of what officialdom says about the economy can be trusted 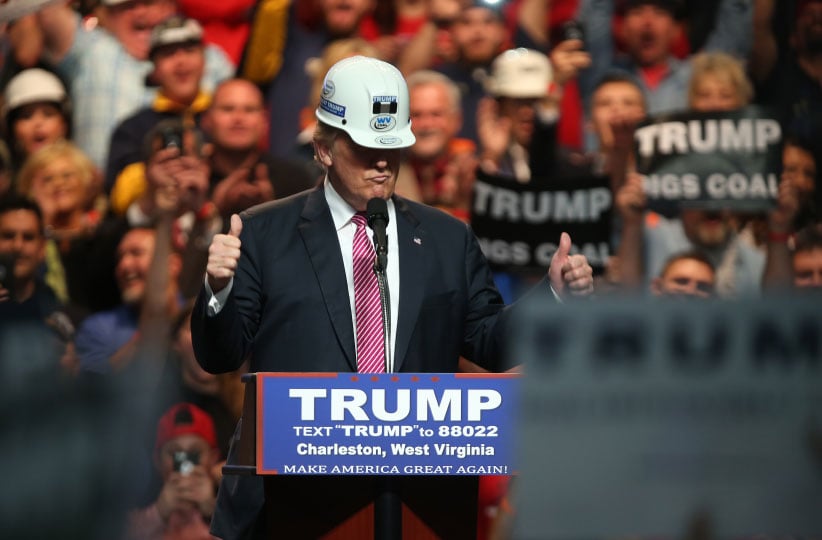 It no longer is partisan, or even condescending, to suggest that U.S. President Donald Trump inhabits a world of his own creation. It simply is deduction by observation. After half a year in office, the public record is replete with examples of the president referring to events that didn’t happen, or describing scenarios that took place in a world that doesn’t exist.

Take Trump’s recent interview with the Wall Street Journal. At one point, he told his interlocutors that he hopes to drop the U.S. corporate tax rate to 15 per cent. Then, Trump veered off course to relay conversations that he says he’s had with leaders of big emerging economies. “I’m saying to myself, here we are at like one per cent, dying, and they’re at nine per cent and they’re unhappy … these are like countries, you know, fairly large, like 300 million people,” Trump said, according to the transcript, which was obtained and published by Politico.

Let’s unpack that comment and run a quick reality check.

There is only one country in the world with a population in the 300-million range: the United States of America. China and India each host more than one billion souls, while Indonesia’s population is about 264 million, according to the United Nations. Nor are there any countries whose economies are growing at nine percent. Ethiopia (population: 105 million) averaged growth of about 9 per cent in 2015 and 2016, but that country’s expansion will slow to about 7.5 per cent this year, according to the International Monetary Fund. That still will be the fastest growth by an economy of any size. China’s gross domestic product hasn’t advanced by more than nine per cent in a year since 2011, when it began taking steps to cool its economy after a couple of decades of off-the-charts growth. Other big emerging markets have slowed with it.

Conclusion: Trump was talking to leaders of countries that don’t exist.

Some say the president should be forgiven for conducting himself as if he still was a star of reality television—he should be taken seriously, not literally. Those people will say Trump’s point in the passage above was perfectly clear: developing economies grow fast. Stop sweating the details.

But that apology for Trump’s stylized interpretation of facts is wearing thin. His verbal nonsense is turning the U.S. into a version of China—a place where little of what officialdom says about the economy can be trusted. The White House under George W. Bush and Barack Obama could actually be counted on for decent economic analysis, once you corrected for partisan and ideological bias. The current president’s distortions are destroying the executive branch’s credibility. That matters: economies work best when economic actors trust the government. The only people on the planet who fully trust Trump are his bedrock supporters, a majority in the Republican Party, but a distinct minority of the total population of consumers, entrepreneurs, executives and investors.

There is a good story to tell about the U.S. economy, starting with record stock prices, and including one of the lowest unemployment rates on record. Measures of confidence have spiked; the Conference Board’s consumer-sentiment index is hovering near a 16-year high, for example. Yet there is a reason to think sentiment would be even stronger if not for Trump. The University of Michigan’s consumer-confidence index hit a ceiling earlier in the year, and was losing buoyancy in July, partly because Democratic respondents refuse to see anything good in Trump’s America. 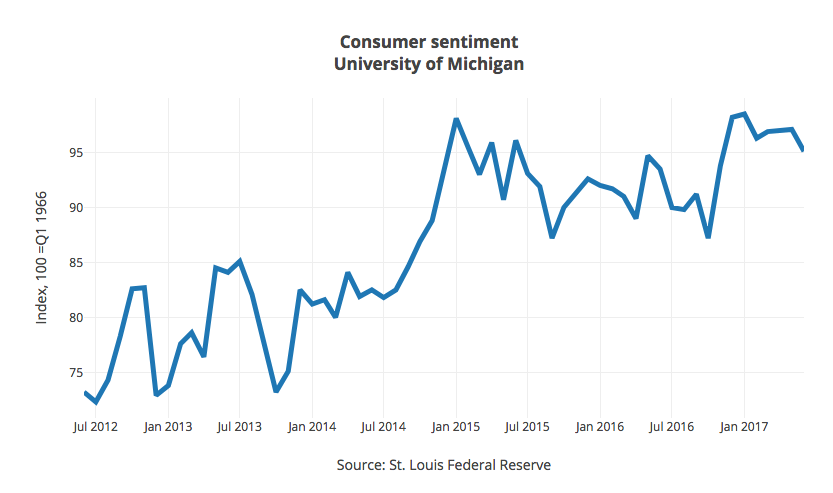 Meanwhile, some Republicans are starting to lose hope, as their president failed to overhaul health care like he said he would. “The recent declines among Republicans were somewhat predictable, but the maintenance of extreme pessimism among Democrats is more surprising,” said Richard Curtin, the economist who oversees the Michigan surveys.

Some of this could relate to Trump’s indecision over the America he wants to project.

On July 25, he told the Journal that the U.S. economy was “dying,” growing at a miserable rate of one per cent. Maybe that’s the case in the dystopia Trump presented in his infamous inauguration speech. But in the world tracked by federal statisticians, U.S. GDP has averaged annual gains of 2.1 per cent since 2010. The expansion since the Great Recession is now the third longest since 1850. Faster growth would have been nice in the aftermath of the financial crisis, but the U.S. is hardly “dying,” as Trump asserted.

The president may know that. A week later, he was taking credit for an economy that looks very much alive.

On August 4, the Bureau of Labor Statistics reported that U.S. employers added another 209,000 jobs in July, dropping the unemployment rate to a 16-year low of 4.3 per cent. Trump tweeted: “Excellent jobs numbers just released—and I have only just begun. Many job stifling regulations continue to fall. Movement back to USA!”

And in the wee hours, before the hiring data were released: “Consumer confidence is at a 16-year high…and for good reason. Much more regulation `busting’ to come. Working hard on tax cuts & reform!”

There’s more. A couple of days earlier, the Dow Jones Industrial Average crossed 22,000 points for the first time. The president thought he’d bask in the glory of yet another record day on Wall Street. “Business is looking better than ever with business enthusiasm at record levels,” Trump tweeted. “Stock market at an all-time high. That doesn’t just happen!”

No, it doesn’t; which is why the president deserves little credit for the stock-market rally or anything else. It’s too soon, and he hasn’t done very much.

American employers have added some 17 million jobs since the financial crisis without interruption, an incredible run. The economy had so much momentum by last autumn that not even Trump’s chaotic style of leadership could knock it off course. Indeed, in the six months prior to both Trump’s election in November and his inauguration in January, U.S. employment grew faster than in the six months since he took office. 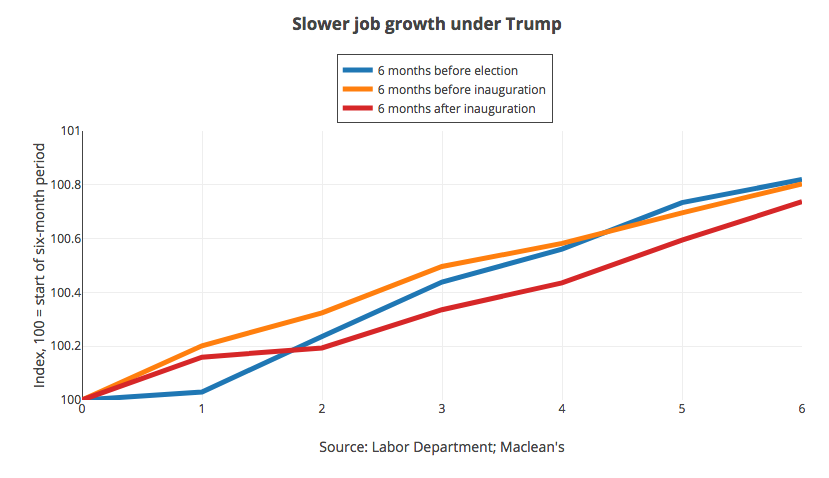 In a world populated by Chinese dragons, Indian elephants, and South Asian tigers, the U.S. has become the tortoise, slowly and steadily re-establishing itself as the foundation of the global economy. Its companies dominate the most important industries. And unlike the years that preceded the financial crisis, American consumers have money in the bank. Tom Porcelli, an economist at RBC Capital Markets in New York, observed recently that U.S. household’s ratio of cash to liabilities is the highest in a generation. The U.S. economy is sitting on solid foundations. It is growing despite Trump, not because of him.

Yes, the prospect of Republican hands on the levers of legislative power excited investors in the weeks that followed the November election. But dreams of big tax cuts have been postponed, if not abandoned. Rarely, if ever, has an absolute majority in Washington accomplished so little. Business lobbies claim they still anticipate reforms, but that is messaging aimed at staying on the good side of an unpredictable White House. The IMF, the Bank of Canada and others have cut their outlooks for U.S. growth because they no longer think it is realistic to bet that Trump and the Republican leadership in Congress will make good on the fiscal stimulus they promised.

READ MORE: The hype about a Donald Trump bump for the U.S. economy is over

Consider the bitterness that is starting to creep out from behind the doors of the mom-and-pop shops from which Trump and the Republican Party draw so much support. Smaller companies, ridiculously enthusiastic about the Trump presidency initially, now are less excited because of the Obamacare debacle. A confidence index compiled by the National Federation of Independent Business peaked at 105.9 in January and has since dropped a couple of points. That’s still good, but the politically powerful small-business lobby sounds unhappy. “Economic growth in the first half of this year will be about the same as we have experienced for the past three or four years, no real progress,” the federation said when it released its results for June. “There isn’t much euphoria in the outlook for the second half of the year.”

There’s euphoria to spare on Wall Street, of course. But again, few are giving Trump credit for it. Remarkably, investors appear to have tuned out Washington. Bloomberg News analyzed three months of earnings calls through July 31 and found that executives were preoccupied by Jeff Bezos far more than they were by Trump: Bezos’s Amazon.com Inc. was mentioned 635 times, compared with 162 mentions for the president.

While the rest of us obsess over politics, the Masters of the Universe are getting back to business. For years, stock prices rose because the U.S. Federal Reserve had pushed bond yields to essentially zero. But now, equity markets appear to be responding to a couple of quarters of strong corporate profits. The companies that are leading the way—outfits such as Alphabet, Amazon, Apple, Caterpillar, Goldman Sachs and Facebook—are benefiting as much from international sales as they are from domestic revenue. In other words, American investors are benefiting from globalization, an economic system that Trump has tried to discredit since taking office.

If there is a market that still is putting a price on Trump, it’s foreign exchange.

The value of the U.S. dollar has fallen more than nine per cent this year, according to an index that tracks its value against the currencies of America’s main trading partners. 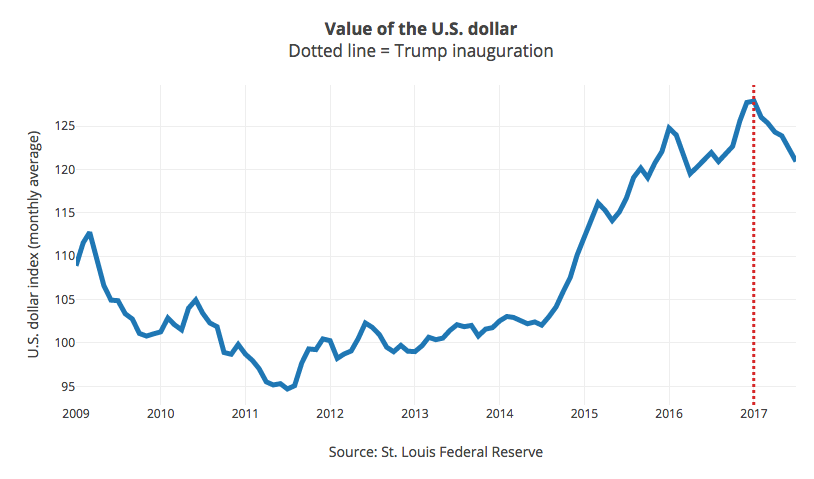 Some of that relates to shifting expectations of what the Fed has planned for interest rates, but a broad loss of confidence in Trump is also a factor. Investors loathe instability, and the president offers nothing but.

Will the frustration evident in the foreign-exchange market spread to stocks? Ironically, a weaker dollar helps companies such as Amazon and Caterpillar by making their international sales more profitable when converted into dollars, or by making their products more competitive. That’s another reason to bet the U.S. economy will endure Trump.

And if it does, you can be certain the president will take credit for it.