Hitler comparisons on all sides are being bandied around with reckless abandon, but the answer is not to demand a stop to them altogether 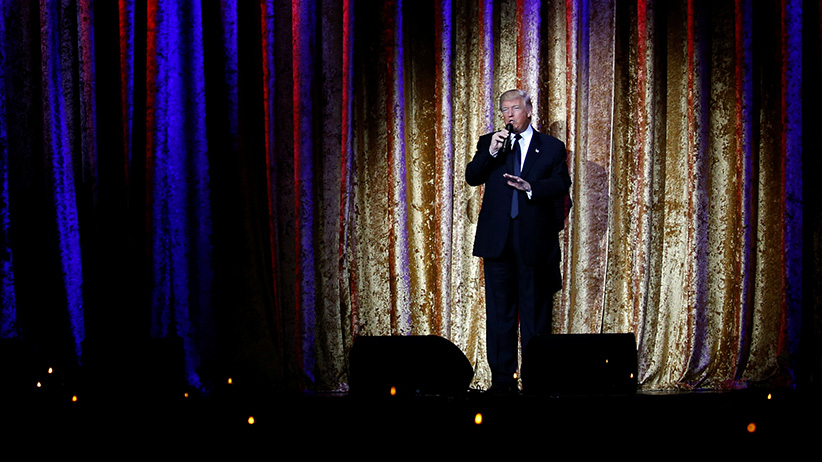 Let’s just pause and digest that.

The man who will be president of the United States on Friday has compared the CIA, FBI and National Security Intelligence Agencies to Hitler’s security regime. Repeatedly.

Intelligence agencies should never have allowed this fake news to “leak” into the public. One last shot at me.Are we living in Nazi Germany?

Days later, when asked to explain this jaw-dropping comment at his press conference, Trump doubled down. “I think it was disgraceful that the intelligence agencies allowed any information that turned out to be so false and fake out,” Trump said. “That’s something that Nazi Germany would have done—and did do.”

The outgoing head of the CIA, John Brennan, called the comparison “outrageous,” a deep insult to the men and women who work at the agency. Brennan and Trump are at an unprecedented, massively destabilizing war of words. On Jan. 15, Trump tweeted out another barrage of criticism, this time not only undermining the CIA’s credibility on foreign policy issues (a defensible position from an analyst, exceptional coming from the PEOTUS), but on the fundamental issue of trust and patriotism. Essentially, Trump accused Brennan of leaking false information in order to undermine his presidency. That’s just on the line of an allegation of treason.

much worse – just look at Syria (red line), Crimea, Ukraine and the build-up of Russian nukes. Not good! Was this the leaker of Fake News?

This alone should have dominated headlines for days, but the daily torrent of tweets and statements from Trump has accelerated the news-cycle so much that it’s difficult to properly process a single incident before another overwhelms it. One moment Trump is declaring NATO “obsolete,” the next he’s picking a trade war with China or praising Vladimir Putin and, then suddenly, he jibes to Meryl Streep’s acting abilities or Arnold Schwarzenegger’s reality-TV ratings. His Twitter feed is a rattling lid on a boiling pot, the constant eruptions leading to a general fear that something underneath is burning very badly.

It’s stylish for pundits to invoke what’s called Godwin’s law anytime time someone in the public invokes a comparison to Nazi Germany. Coined by author Mike Godwin in 1990, the term described the inevitably that in any online debate, someone will, eventually, bring up Hitler. The point was to reveal how discussions online devolve into base name-calling and inane comparisons. Over the years, Godwin’s law evolved to mean the first person to invoke Hitler in any argument automatically loses.

It’s a fair point. Trump’s invocation of Nazi Germany was vulgar and irresponsible on many counts. First of all, even if the CIA did leak the document—which they deny—Trump sets himself up, in his tweet, as analogous to the victims of the Nazis. Imagine, Trump sees the damage the leaked document did to him as something as bad as the slaughter of millions by the Nazis. Quite rightly, this outrageous tweet elicited swift denunciations.

“The president-elect’s use of Nazi Germany to make a political analogy is not only an inappropriate comparison on the merits, but it also coarsens our discourse and diminishes the horror of the Holocaust,” the CEO of the Anti-Defamation League CEO Jonathan Greenblatt wrote.

In an even more strongly worded statement, Steven Goldstein, the executive director of the American Anne Frank Centre for Mutual Respect said it was “a despicable insult to Holocaust survivors around the world, and to the nation he is about to lead, that Donald Trump compares America to Nazi Germany.”

On the other hand, Trump has been repeatedly compared to a Nazi in an equally loose and irresponsible manner. “Yes, Donald Trump is a fascist,” wrote Jamil Smith in the New Republic a year ago. “The internet proverb known as Godwin’s Law warns of the increasing likelihood of a Nazi or Hitler reference the longer a conversation goes. That law would seem to apply to Donald Trump in a different way: The longer he runs in (and atop) the Republican presidential primary, the probability of his sounding like a Nazi increases.” Google Trump and “fascist” and over 11 million hits come up, almost 50 million for Trump and the word “Nazi.”

On both sides—the left and the right—the comparison is reckless. Trump is not a Nazi nor is he the modern day Adolf Hitler. Any basic reading about the rise of Hitler and the Germany he grew up in shows the comparison is crude. Hitler, a veteran of the First World War, was always a political radical, and the failed beer hall putsch of 1923 revealed his penchant for violent disruption and support for a thug-like police force. Hitler’s writings in Mein Kampf, the book he subsequently authored in prison, openly displays his racist political ideology and his readiness to do anything to achieve a fascist state. Eventually, after the burning of the Reichstag, Hitler solidified power and began his years of unprecedented genocide and Holocaust. In other words, despite comparisons to Trump’s odious and often offensive statements about Muslims, Mexicans and women, to name just a few groups, he is literally nothing like Trump, 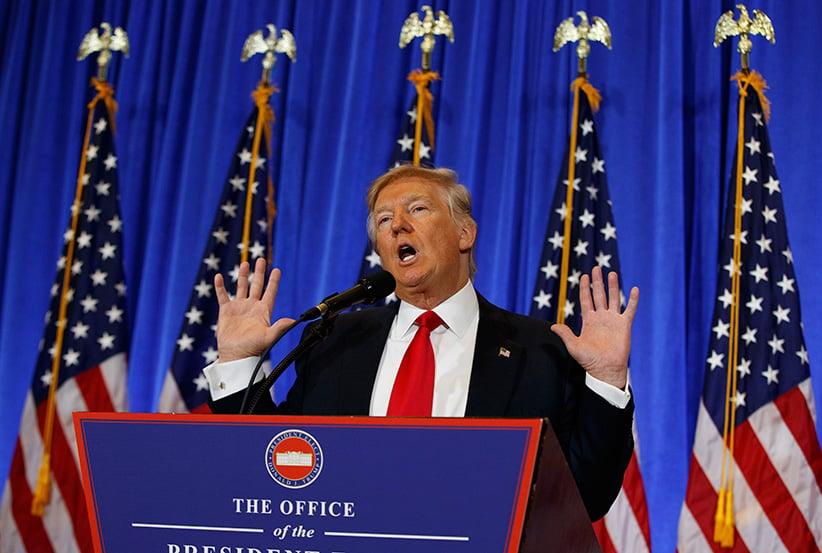 America in 2017 is not Germany in 1933 but that doesn’t stop the ongoing comparisons. As I have written before, there is a tendency on the right is to see every political decision through the lens of the appeasement of Hitler by Neville Chamberlain in 1938. It is not uncommon to hear Conservatives invoke that moment to justify foreign intervention and wars in places like Iraq or Syria. Interestingly, Trump’s eerie flirtation with Vladimir Putin’s Russia has not been viewed by many Republicans as a strategic act of engagement, a Nixon-going-to-China moment. Instead, it’s seen with the suspicion it deserves. It actually does smack of a certain kind of appeasement, but we must be extremely careful equating Russia in any way with fascist Germany, given their enormous sacrifice in the Second World War. Russia and the Soviet Union has a long and brutal history of horrific torture and abuse that merits real unvarnished attention, but it is deeply insulting to tens of millions of Russians who died fighting the Nazis to cheaply equate their situation to fascist Germany.

On the left, however, if it not uncommon to see every comment by Trump—it was same with George W. Bush—as one step away from the Nazification of America. Trump’s putative immigration plan, though it has attracted fellow travellers on the extreme far right, is not in the same dimension as Hitler’s loathsome 1935 Nuremburg laws, so any comparison is out of line. By the way, I use the term “extreme far-right” instead of the current euphemism, “alt-right,” which is an attempt to rebrand racists as a new, acceptable element within the movement of legitimate conservatism. They are not. You might wonder if there is a modern-day version of Conservative movement leader William F. Buckley, who pushed out the John Birch Society for its opposition to the 1964 Civil Rights Act and its paranoid view of Communist infiltration.

Still, if the Hitler comparisons on all sides are being bandied around with reckless abandon, the answer is not to demand a stop to them altogether. Godwin’s Law—and Godwin himself has said this recently in the Washington Post—is not meant to be used as an act of censorship, but as a tool of responsible debate. The world we live in today has been painstakingly built on the ashes of the Second World War and carefully designed to prevent another conflict of that magnitude. Our systems of trade globalization, security alliances like NATO, diplomatic institutions like the UN, and relationships like the European Union—though all under heavy attack right now from people like Trump and various populist and/or nativist political parties around the world–have fundamentally kept the world in peace for 70 years, with life expectancy, health outcomes and standards of living generally rising in an unprecedented fashion. The idea that we cannot invoke the greatest eruption of violence in history in order to learn from this or fight for these very structures is to blind ourselves in both eyes.

When leaders like Trump or his supporters repeatedly attack the credibility of the media, or use terms that are generally associated with Nazi Germany, like luggenpresse (“lying press”)—which became a popular hashtag in the campaign—it is fair to raise concern about where this may lead and the damage it does. When leaders start to equate political opponents to “enemies”—something Trump has also done on Twitter—it is cause for real concern. The rise of protectionism, the re-emergence of Russia’s Cold War-style aggression, China’s new muscularity in the South China Sea—where a confrontation with Japan is a very real possibility—and Trump’s own unpredictable and combustible comments on foreign policy all mean we have to reach back in history to clearly and carefully learn lessons. History is not repeating itself, but it is, as the saying goes, rhyming.

I’m as wary of invoking Godwin’s Law to stop the debate about Trump as I am about Trump’s careless use of the Hitler comparison. Freedom in any society can erode quickly and we ought to be vigilant, but in correctly chastising those who trot out cheap Hitler comparisons, let’s not let the lesson of fascism’s rise slip away either.