The White House is ground-zero for distrust, suspicion, and sloppy thinking. That’s a serious problem. 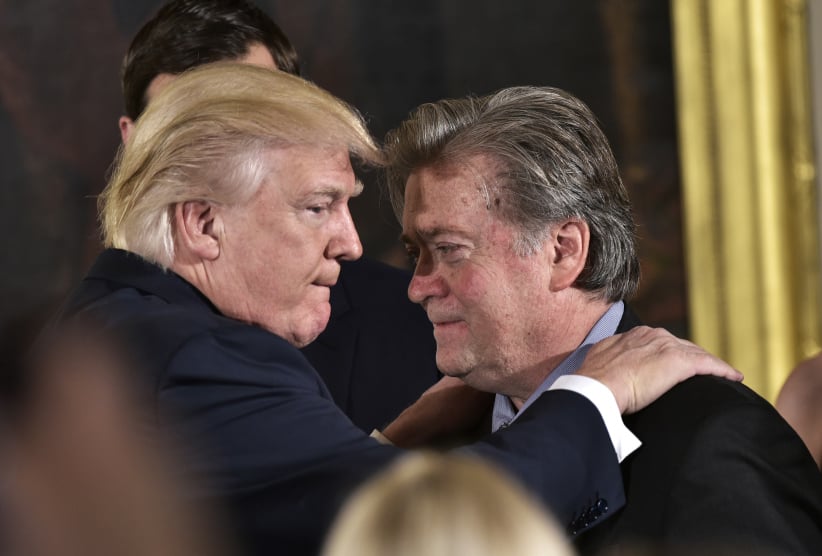 U.S. President Donald Trump congratulates Stephen Bannon during the swearing-in of senior staff in the East Room of the White House on Jan. 22, 2017. (Mandel Ngan/AFP/Getty Images)

It’s a bit taboo in scholarly circles to explain geopolitics with reference to the psychology of world leaders. It’s a bit too cute. A bit too easy. A bit too sloppy. Lincoln was depressed. Napoleon was a megalomaniac. Churchill was an alcoholic. Hitler was a methamphetamine addict. Stalin was paranoid. The wisdom of the exercise is questionable because it requires us getting into the heads of (sometimes long-dead) people, making assumptions we probably shouldn’t and drawing inferences that may be misleading. Even when there is documentation of mental illness among these transformative leaders, lazy researchers have a tendency to use the mental state of the leader to explain everything about their time in power.

Even before Donald Trump was elected, pundits, commentators, activists, politicians, and academics rushed to assess the man’s mental health. Diagnoses of Trump as living with narcissistic personality disorder became so common that the psychiatrist who helped define the illness, Dr. Allen Frances, spoke out to clarify that the 45th president may be a narcissist, but wasn’t necessarily mentally ill. As Dr. Frances argued, “When people are bad, they should be labelled appropriately and denounced for their behaviours. We should not use mental illness to slur someone.”

I’m with the doctor. We can’t as the public know whether or not Trump is mentally ill, and we all have other things to worry about. What we can do, however, is evaluate the climate in which the administration operates, and debate the implications of that environment. Quite plainly, the Trump White House operates in an environment characterized by deep, persistent, and disconcerting paranoia—whatever the state of Trump’s mental health.

Terrorists are “flooding in” over the border. The press is “out to get us.” Staffers’ phones must be checked for evidence of disloyalty. Obama “tapped my wires.” Trump’s administration isn’t even two months old yet, and already the levels of paranoia are reminiscent of the last days of the Nixon White House—or a typical day in the life of Winston Smith. Why all the distrust and suspicion?

Trump was always an “outsider” candidate. Sure, he’s a plutocrat and a member of the establishment, but he’s never fully been a member of the “establishment.” The former grouping is broad and defined by wealth, connections, and social class, but the latter is a different sort of thing. The “establishment” is the political hegemony—the human bricks and mortar that sustain politics-as-usual year after year, those who ensure that the state endures, that tomorrow looks more or less like today, that the practices and ideas accepted as legitimate fall within a certain range. I suspect that crowd has spent decades laughing at Trump, despite his wealth and connections, and he must know it. No amount of golf photo-ops with members of the Washington elite can make up for being an outsider.

Candidate Trump won the 2016 election on an anti-“establishment” platform backed by a narrative that promised that the bombastic, outsider candidate would turn Washington inside-out. Trump got his news and his cues from Breitbart and Infowars—hotbeds of paranoid conspiracy mongering—and by most indications, he still does. Paranoia with its boots polished. Such “alt-right” (read: white nationalist, xenophobic, hate-spewing) outlets are ground zero for enabling motivated reasoning, a form of thinking typically marked by biased research practices and torqued “reasoning” deployed in the service of rationalizing what one wants or needs to believe while minimizing cognitive dissonance—the anxiety or stress that comes with trying to manage incompatible values, preferences or beliefs, or when encountering new information that challenges something that’s important to the individual.

“I believe in lower taxes, but my preferred party just raised taxes.”

“Well, they’re just raising taxes a little bit now so that if the other party wins, they won’t raise them even more.”

After Trump’s win, and in the midst of stories about potential collusion with Russia, many Republican supporters, typically wary of the erstwhile Red Menace, ahem, “readjusted” their opinions. “After all, if our president says Russia is okay…” It’s difficult and too cute by half to diagnose Trump’s mental health, but accusing him of motivated reasoning is germane. For one, we all engage in it. But for another, the “evidence” Trump cites and the allegations he makes are telltale signs of it, and help explain his thinking. It isn’t what he is but what he does.

In the 1970s, Trump’s lawyer was Roy Cohn, the former errand boy—or, rather, chief counsel—of the red-scare Sen. Joseph McCarthy of McCarthyism infamy, and later attorney to mobsters and the dodgy elite. Cohn played a significant role in sending the Rosenbergs to the electric chair in 1953 after their conviction for conspiracy during a time of anti-communist hysteria.

As the New York Times said of Cohn’s influence on the president: “Mr. Trump’s response to the Orlando massacre, with his ominous warnings of a terrorist attack that could wipe out the country and his conspiratorial suggestions of a Muslim fifth column in the United States, seemed to have been ripped straight out of the Cohn playbook…. For 13 years, the lawyer who had infamously whispered in McCarthy’s ear whispered in Mr. Trump’s.”

The more I pay attention to Trump, the more I’m convinced he truly believes what he says—not in the same way that someone believes that if they drop a pencil it’ll hit the ground because of gravity, but rather more like the way someone believes that they’re in line for eternal salvation. The paranoid atmosphere that surrounds the Trump administration seems like a function of a self-obsessed president who truly does believe he’s an outsider, who thinks the “establishment” is out to get him, who gets his news from sources he genuinely trusts but dearly shouldn’t, and who listens to Steve Bannon the same way he used to listen to Cohn. That’s what his actions indicate, anyway.

When Trump says something unhinged—for example, accusing Barack Obama of wiretapping him without any evidence—and later finds no evidence, you might expect him as the president of the United States to re-evaluate his claim. But for Trump’s paranoid administration, an absence of evidence is not evidence of absence; instead, it’s an indication that “the truth” (which is, of course, “out there”) must be buried even more deeply than they imagined. For true believers, empirical, verifiable evidence isn’t all the important anyway.

A dangerous echo chamber emerges when a paranoid administration engages in routine motivated reasoning, as well as confirmation bias (interpreting new evidence as supporting one’s existing beliefs) and availability bias (“evidence” that is close at hand is more likely to be drawn upon). After all, the more the press, activists, and other citizens call the president out, the more paranoid, defensive, and combative he and his administration become.

Whatever the status of Trump’s mental health, the paranoia of his administration combined with his approach to reasoning and arguing are of at least as much concern—and are much easier to evaluate. I suppose that’s the good news. The bad news, of course, is that by all indications we shouldn’t expect his team to change its tack for the better any time soon.