Philippe J. Fournier: Some modest polling errors in a number of toss-up states and a win in Pennsylvania could push Trump over the tipping point to win 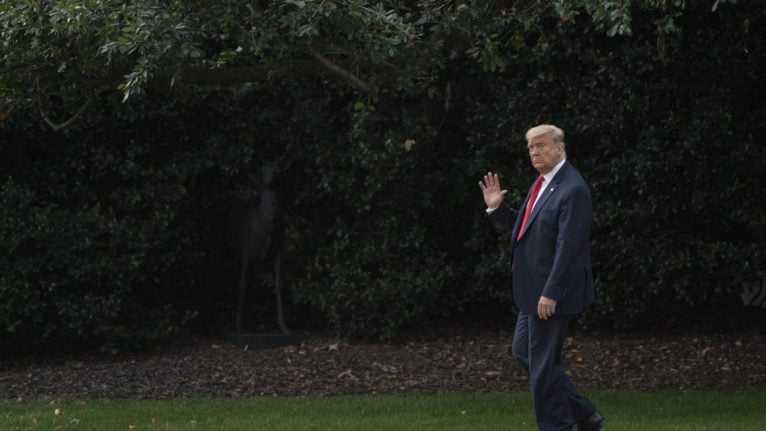 Trump waves from the South Lawn of the White House before boarding Marine One in Washington on Oct. 20, 2020 (Alex Edelman/EPA/Bloomberg via Getty Images)

With less than two weeks to go in the election campaign south of the border, national polls still overwhelmingly show Joe Biden as the favourite in the race over President Donald Trump. Indeed, the national numbers measure that Biden is holding on to a relatively comfortable lead of 8 to 10 points on average, which has remained mostly stable—give or take a point—since the middle of summer.

Nevertheless, we know all too well that it is not the popular vote that ultimately decides the presidency, but the Electoral College. On this front, the state polls measure a somewhat closer race than the national polls, even though Biden should still be considered the favourite.

Here is the current presidential map from the 338Canada model:

Let’s take a look at the most likely path to re-election for President Trump using the above map.

The most likely Trump path to victory

As of this writing, the tipping point is Pennsylvania, where Biden holds an average lead of five points over Trump according to the 338Canada model.

As you can see on the graph below, Pennsylvania is the first state above the dotted line on the right (blue) side.

Therefore, assuming Trump holds the toss up states of Iowa and Ohio, Trump would have to carry all of Georgia, North Carolina, the always-important Florida, Arizona and, finally, Pennsylvania to win.

Here are the current 338Canada average leads in those states:

Outside of Pennsylvania, Trump would only need a modest polling error in his favour to win these states should the current numbers hold. This is why, even though Trump will almost assuredly lose the popular vote (again) to his democratic rival, his odds of winning the presidency are still reasonable given the current context.

This is a lot of ground to make up with varying demographics for the Republicans. Nonetheless it is worth noting that Trump did win all of these states in 2016.

What if Trump loses Florida?

Florida has been the most important swing state in recent presidential elections and has sided with the winner in all but three elections in the past century. Tied with New York, its 29 electoral votes ranks third after California (55) and Texas (38). In 2016, Trump won Florida by a single point over Hillary Clinton. Could Trump lose Florida in 2020 and still win the presidency?

The answer is yes, but it would get much trickier:

By losing Florida, Trump would have to compensate by winning Wisconsin (as he did by a fraction of a point in 2016). Additionally, he would have to win Minnesota and Nevada, two states Clinton carried in 2016. While this scenario does not appear likely at all, it would be the easiest path—according to the numbers—without Florida.

What if Trump loses Pennsylvania?

If Trump were to climb back into contention in the states before the tipping point, but failed to secure Pennsylvania, the likeliest path to victory would be to win Wisconsin. In that case, we would have a 269-269 tie and all eyes would turn to Maine and Nebraska, two states that give electoral votes according to their congressional districts. While we expect Maine to remain blue and Nebraska to stay red, both state’s 2nd congressional district have been competitive in the past. In 2008, Obama won the 2nd district of Nebraska and in 2016, Trump carried the 2nd district of Maine.

Such a scenario could probably get messy, and turn election day into election month. But let us not get ahead of ourselves, and keep following the numbers all the way to Nov. 3.

For detailed projections of the U.S. presidential race, visit the 338Canada USA page here. Projections will be updated daily until election day. Follow 338Canada on Twitter.