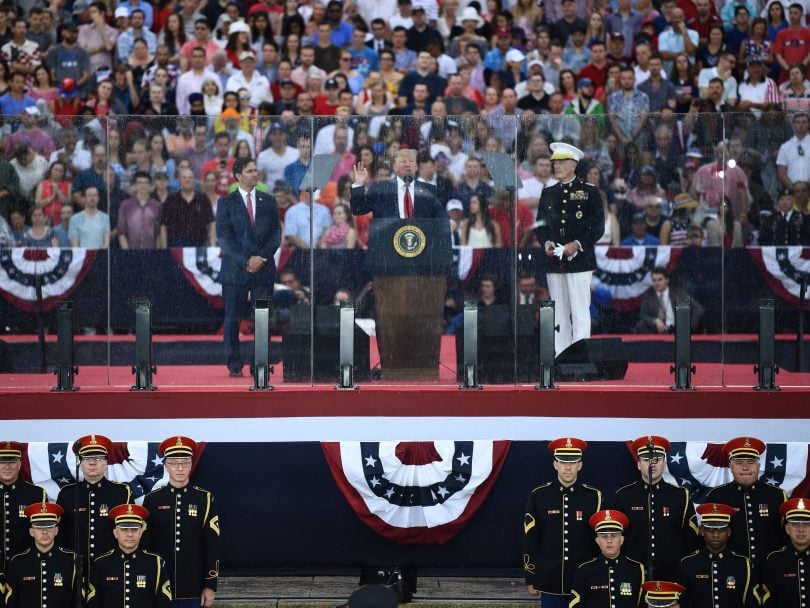 US President Donald Trump speaks alongside acting Defense Secretary Mark Esper (L) and the Chairman of The Joint Chiefs of Staff Joseph Dunford during the "Salute to America" Fourth of July event at the Lincoln Memorial in Washington, DC, July 4, 2019. (Brendan Smialowski/AFP/Getty Images)

Patriots express themselves in different ways. In the United States, some did so on Thursday by dancing in Rosie the Riveter costumes in the National Independence Day Parade, an hours-long affair running a mile down Constitution Avenue in Washington, D.C. If you’re a military pilot, maybe you volunteered to fly one of the Navy’s Blue Angels over this year’s controversial military ceremony. And if you’re President Donald Trump, you spent four hours at your golf club in the morning, prepping a hyped-up speech you’re going to give in front of the Lincoln Memorial. This, after all, is Trump’s event—a Fourth of July less about American ideals than polarizing politics. Against a weeklong backdrop of arguments over patriotic symbols—Is it fair to ask about citizenship on a national census? Is the Betsy Ross flag racist? How many millions of dollars is too many to spend on a superfluous military parade? How much will D.C. spend repairing the road damage caused by trucking in essentially decorative tanks?—Trump is steamrolling ahead, ignoring his critics (as usual) and demanding his citizens’ support. By many metrics, Trump, more than any other American president, most resembles a wannabe dictator, and this latest flex of military showmanship seemed a sad attempt to mimic Russia’s Vladimir Putin or China’s Xi Jinping. Still, Trump’s meaning is clear: I am more American than you, and if you defy me, you’re a traitor. Need proof? Check out my tanks.