As we get used to Trump’s style of governing, we risk forgetting that his authoritarian tendencies are disturbing and dangerous 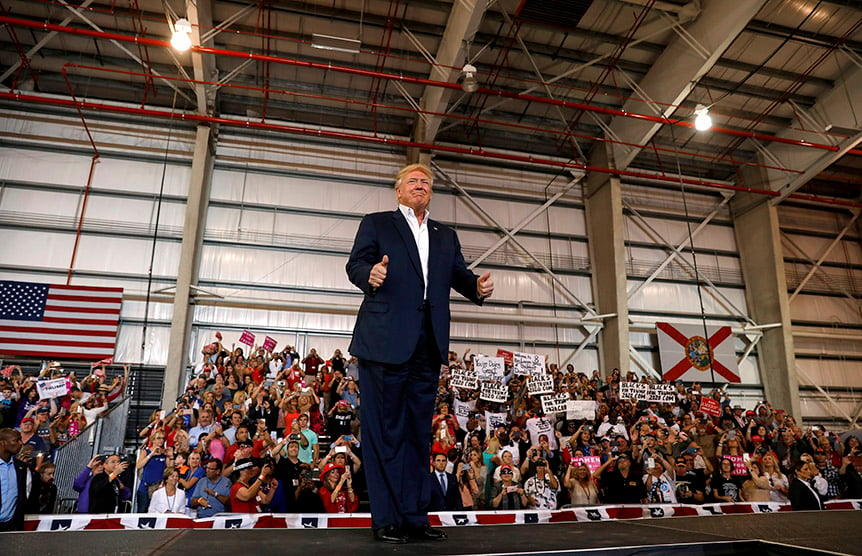 Styles come and go. In the late-1980s and early 1990s, many of us were clad in neon t-shirts and shoes that lit up when you took a step. Today, not so much.

Governing styles are also subject to changing tastes, both in form and in substance. One tradition that has enjoyed staying power is stylizing revolutions and civil wars as “for the people.” As democratic norms evolved over the years and spread around the world, leaders and movements necessarily paid homage to the notion that what they did and what they were about was first and foremost for the well being of their people, however they defined “well being” and “people”. Such upending movements as the Russian Revolution, the rise of Hitler and Nazism, the foundation of the Democratic People’s Republic of North Korea, the Salvadoran civil war, recent popular revolts in the Middle East, and the election of Donald Trump all share the claim that they are “for the people.”

We can and should distinguish between North Korea’s claim to popular representation and Donald Trump’s insistence that he entered politics to stand up for “regular Americans.” The latter was elected in a (mostly) free and fair election in a country with a long history of functioning—if imperfect—democratic institutions. The former is an authoritarian nightmare state from which few of its citizens can awake. We must also distinguish Trump from Hitler and Nazi Germany, the rise of the Bolsheviks in Russia, full blown authoritarianism in Central America, etc., because there’s no need for hyperbole when we’re talking about Trump’s presidential style.

MORE: How long can Trump’s love affair with Republicans last?

Now that Trump is a few months into his presidency, his unusual style of governing, marked by populist authoritarian flourishes, is becoming normalized as the shock wears off and even those voters who fought against Trump’s movement try to go on with their day-to-day lives. Lately, when people casually talk about American politics, two conversations constantly repeat themselves: reactions to Trump’s latest outburst or executive action, and deliberations on the best way to avoid all the noise. That makes sense. Trump is everywhere: on television, radio, and social media; in the newspapers, blogs, and magazines. Most of us encounter America’s 45th president everywhere we go, from the bus to the grocery store to the gym. His absurdity is ubiquitous, but it’s also becoming the new normal—which is very dangerous.

The threat that stems from normalizing Trump lies in his approach to governing. As a way of doing politics, populist authoritarianism is marked by leaders casting themselves as anti-elite, ordinary folks who stand up to the out-of-touch, in-it-for-themselves, anti-everymen who reside in the ivory tower, corporate headquarters, or distant capital city. Populist authoritarians often circumvent democratic institutions or practices in order to “speak directly to the people” at rallies or public appearances or, these days, on social media. Meanwhile, they attack fundamental institutions and treat the country they govern as a source of personal enrichment and aggrandizement. Perhaps some of this sounds familiar.

As president, Trump has continued to hold “campaign-style” rallies and consistently takes to Twitter to praise his supporters and denounce the media—or anyone else who happens to catch his eye and displease him. As a rule, I try to link to sources to provide evidence for my arguments. Trump and Twitter make that almost unnecessary. Go and have a look at his latest dozen or so tweets; you’ll find plenty of what I’ve just described, whichever day or week or month it is. Pour yourself a drink first.

It’s tempting to dismiss the president’s rallies and Twitter tirades as an unholy and pathetic alliance of a narcissistic need for praise and attention combined with having thin skin and a near-total lack of impulse control. While Trump may suffer from these shortcomings, the effects of his actions remain seriously disconcerting—disturbing and hazardous, even. While the man is despised by many and liked by few, those who prefer him do so with zeal. Despite his high disapproval numbers, he maintains high levels of support among self-identified Republicans. Moreover, despite his recent defeat in his efforts to repeal Obamacare and challenges around securing a nomination for his Supreme Court nominee, Neil Gorsuch, he retains plenty of representatives and senators as allies in Congress. If his support remains stable, and as I’ve argued, it might not, he might just get a few things done while making each item on his to-do list look like just another day at the office.

Trump’s populist authoritarian tendencies underlie his approach to governing; they inflect much of what he does—the way he communicates a message about his policies, how he negotiates a bill, his tone when he attacks his opponents, the words he uses to rally his supporters. As time passes, it’s easy to dismiss his style and actions as antics; as the days becomes weeks and the weeks become months and the months become years, god help us, it’s easy to keep a rough tally of the insanity while shrugging our shoulders and saying, “Well, there he goes again,” as if he’s some quirky, if embarrassing, uncle we occasionally see during the holidays.

The tendency of some to dismiss Trump’s abhorrent behaviour as normal, combined with others who close their eyes and cover their ears, threatens to create just enough space for the president to push against the limits of what’s acceptable in a democratic society. Over time, as he pushes limits further and further, America faces the threat of severely diminished democratic capacity in the form of normalized anti-democratic measures and a citizenry that has long since checked out from sheer exhaustion.

MORE: How American democracy could slowly fade away

Thus far, American civil society, the media, and the justice system have proved to be formidable opponents to Trump and his enablers. But the president’s failures have often been as much because of White House ineptitude as they have been the effect of outside intervention. It’s an open question as to whether or not a de facto coalition of politicians, lawyers and judges, journalists, activists, and day-to-day citizens can come together to resist Trump’s policies and politics over the long haul. If they are to do so, step one in preserving that effort is ensuring that Americans refuse to normalize the president’s populist authoritarian tendencies.

How can Americans ensure that Trump doesn’t become normalized? First, they can’t tune out—none of us can. The president’s actions must be repeatedly catalogued and called out as abnormal and dangerous. Second, demonstrations of resistance and solidarity are necessary online and offline; in newspapers, magazines, and blogs; in homes and in the streets; all over. Third, U.S. citizens need to maintain hope that Trumpism can and will be defeated, and communicate that belief. Finally, those who oppose the president must work downstream to elect representatives at the local, state, and national levels who will reverse his course and put democracy on track towards more just ends.