The 'Dump Trump' movement gears up for a fight

A group in the Republican Party foments dissent, though it's a longshot, having gained the support of around 400 delegates 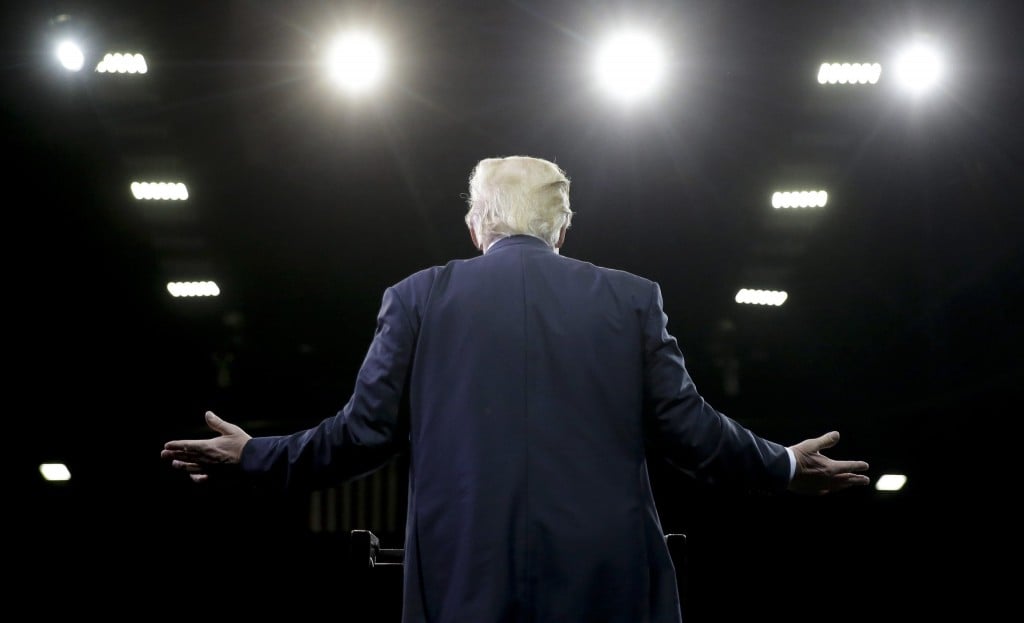 In this May 27, 2016, photo Republican presidential candidate Donald Trump speaks during a rally in Fresno, Calif. It started with Mexicans being publicly accused by Trump of being criminals and rapists. It escalated to ejections, to sucker punches, to pepper spray. And now violence and strife seems to be a commonplace occurrence out on the campaign trail. (AP Photo/Chris Carlson)

WASHINGTON — The “dump Trump” movement is gaining followers among delegates to next month’s Republican National Convention, an effort that’s worrying at least one top party official and could tarnish Donald Trump’s coronation even if it ultimately fails.

Several hundred Republican delegates are organizing to oppose Trump at the convention. That’s not enough to topple Trump. But it’s more than enough to create turmoil at an event that typically unifies a party in support of a presidential candidate.

“If Trump is the nominee, we truly believe it’s the end of our party,” said Kendal Unruh, a Colorado delegate who is leading the effort to dump Trump. “We’re trying to save the party.”

There could be floor fights over convention rules and the party’s platform. And instead of a coronation, the roll call to nominate Trump could allow delegates to voice their displeasure on national television.

“What’s worse for the Republican Party — this is the calculation — one week of absolute chaos and all sorts of recriminations or four and a half months of this looming, rolling catastrophe?” conservative Milwaukee radio host Charlie Sykes said on his Tuesday show.

Underscoring the concern the rebels’ effort is causing, a top GOP official has written his colleagues, saying he’s worried that some leading Republicans might help the dissident delegates.

In a letter obtained by The Associated Press, Bruce Ash — one of Arizona’s three members of the Republican National Committee — wrote that the party “must stand by our presumptive nominee and defend against all who would threaten our legitimacy as a party.”

Ash, who chairs the GOP’s rules committee, said he’s worried that some Republicans appointed to leading roles at the convention have been too close to Mitt Romney. Romney, the party’s 2012 presidential nominee, is a leader among GOP opponents to Trump.

Those Republicans “might possibly work to deny” Trump “the nomination he has earned,” Ash wrote.

“Can you imagine the rage if Trump is denied the nomination?” Ash said.

Some delegates are appalled that their party would endorse a candidate who has publicly insulted women and a reporter with disabilities. Many were alarmed by his incendiary remarks following the Orlando massacre, and some were distressed by his assertion that a Mexican-American judge couldn’t fairly preside over a Trump civil case.

When asked about her objections to Trump, Unruh said: “You mean besides the fact that he’s not a Republican? He’s progressive populist protectionist.”

Trump dismisses attempts to deny him the nomination, noting he will have more than enough support at the convention to win the nomination and control the proceedings.

He has noted correctly that he received far more votes, won many more states, and collected nearly three times as many delegates as his closest rival, Texas Sen. Ted Cruz.

The dump Trump group faces another obstacle: It has no candidate to challenge Trump.

“I have zero clue who is going to do this,” said Unruh, who supported Cruz.

Some veteran Republican strategists and Republican National Committee members expressed resignation about the effort and predicted it will factor little in the convention proceedings.

“I expect the whole thing to fizzle before the convention,” said Charlie Black, an adviser to John McCain in 2008.

Toppling Trump is a longshot effort, according to the math.

Unruh said she has the support of at 400 delegates, including some who are alternates. There will be 2,472 delegates at the convention. It takes 1,237 delegates to win the Republican nomination for president.

Trump has 1,542 delegates, including 1,447 who are required by party rules to vote for him on the first ballot at the convention, according to the Associated Press count.

People in the Cruz camp say there is no organized effort on their part to encourage delegates loyal to the senator to oust Trump. But they aren’t discouraging a delegate revolt, either.

“You’ve got (House Speaker) Paul Ryan saying over the weekend that they should be allowed to vote their conscience — that’s a pretty big deal,” said Chris Wilson, who led polling and data operations for Cruz. “If they somehow end up becoming unbound, I don’t know. All bets are off there.”

Unruh said she and her supporters will work for rules that allow delegates to support the candidate of their choice. They are trying to contact members of the influential rules committee, which meets the week before the convention.

The entire convention will vote on the rules adopted by the 112-member rules committee. It would take 28 votes by committee members to issue a minority report, which would also get a vote on the convention floor.

“I can confidently say that I will have a minority report,” said Unruh, who sits on the rules committee. “We’re saving the party and (GOP Chairman) Reince Priebus will send me flowers, I’m sure.”