'He is not just unprepared; he is temperamentally unfit,' Clinton told supporters 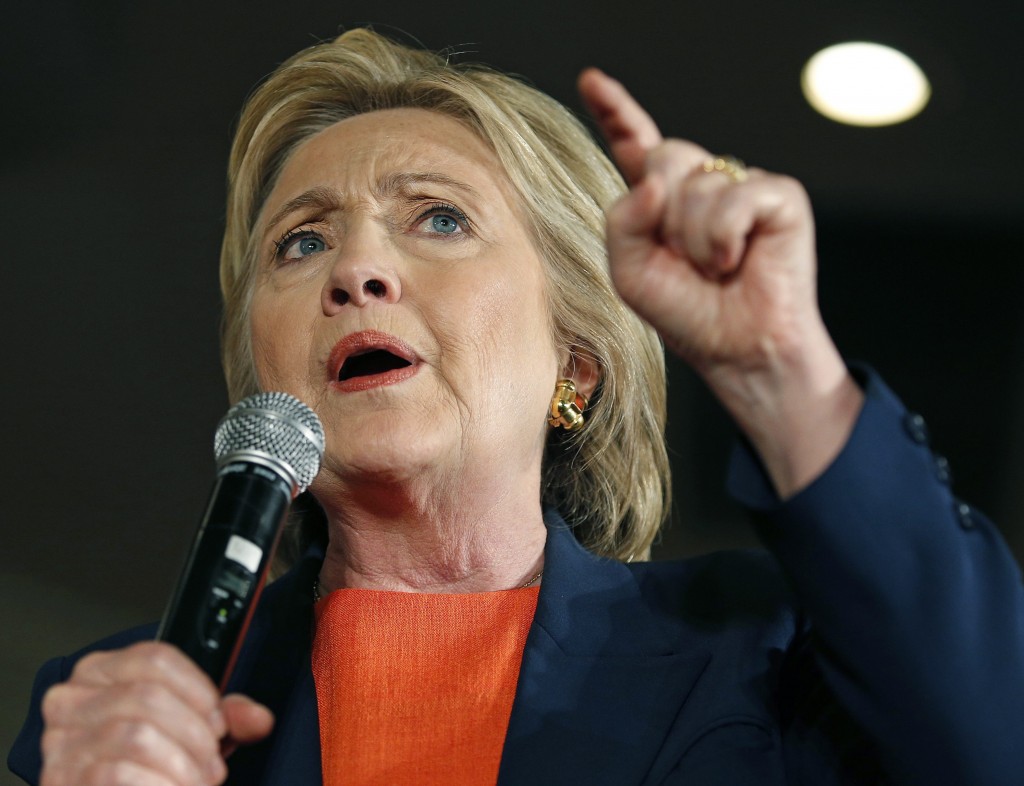 SAN DIEGO – Previewing a rancorous fall campaign, Hillary Clinton assailed Donald Trump on Thursday as a potential president who would lead America toward war and economic crisis. She portrayed her own foreign policy as optimistic, inclusive and diplomatic, born from long experience in public life.

There was nothing diplomatic in her remarks, a clear indication of how she’ll take Trump on. Electing him, she said, would be “a historic mistake.”

During a speech in San Diego that was billed as a foreign policy address, the Democratic former secretary of state unloaded on her likely Republican election opponent, counting down reasons he is not qualified – from his aggressive Twitter attacks to his emotional outbursts.

“He is not just unprepared; he is temperamentally unfit,” she told supporters in a ballroom. “We cannot let him roll the dice with America.”

She said a Trump presidency could spark nuclear conflicts overseas and ignite economic catastrophe at home.

“There’s no risk of people losing their lives if you blow up a golf course deal, but it doesn’t work like that in world affairs,” Clinton said of the celebrity businessman. “The stakes in global statecraft are infinitely higher and more complex than in the world of luxury hotels.”

She mocked Trump’s Twitter blasts and predicted he was preparing more as she spoke. As if on cue, he tweeted after she finished: “Bad performance by Crooked Hillary Clinton! Reading poorly from the telepromter! She doesn’t even look presidential!”

Trump, meanwhile, got an endorsement he’d been seeking, from Republican House Speaker Paul Ryan, who had resisted even after the businessman clinched the GOP nomination.

Clinton’s robust assault on Trump was widely carried on television, a change for the leading Democratic candidate who’s frequently struggled to break through coverage of Trump.

She is ramping up her criticism of the presumptive Republican nominee and trying to quell concerns within her own party that she isn’t ready to rumble with the famously combative Trump. She offered a number of aggressive new attack lines, at times baiting Trump to respond by calling him “thin skinned.”

She hit Trump for his reality television past, for his snarky Twitter feed, for his hotel experience.

She ran down a list of people he has insulted, including the pope.

And she assailed Trump over many statements, criticizing him for seeking to ban Muslims from entering the country, for talking about leaving NATO and for suggesting Japan could one day acquire nuclear weapons.

“He has the gall to say prisoners of war like John McCain aren’t heroes,” Clinton said. “He says he has foreign policy experience because he ran the Miss Universe pageant.”

Emphasizing her experience as first lady, senator and secretary of state, Clinton said she recognizes what it means to deploy American troops and would provide the steady diplomacy the country needs.

Clinton and Trump offer starkly different visions of U.S. foreign policy. Her proposals reflect the traditional approach of both major parties. Despite differences on some issues, such as the Iraq war and Iran, Democratic and Republican presidents have been generally consistent on policies affecting China, Russia, North Korea, nuclear proliferation, trade, alliances and many other issues.

Trump’s “America first” approach is short on details but appeals to angry voters who believe that successive leaders have weakened the country and have been duped into bad trade deals that cost American jobs.

Trump accused Clinton of lying about his foreign policy plans at a rally in Sacramento, California, Wednesday night.

“She lies. She made a speech and she’s making another one tomorrow. And they sent me a copy of the speech and it was such lies about my foreign policy,” Trump said.

“They said I want Japan … to get nuclear weapons. Give me a break,” he objected. “I want Japan and Germany and Saudi Arabia and South Korea and many of the NATO nations – they owe us tremendous. We’re taking care of all these people. And what I want them to do is pay up.”

Trump has suggested in the past that he might be OK with Japan one day obtaining nuclear weapons.

In recent days, Clinton has criticized Trump over his business practices, his resistance to disclose which charities received money he raised during a January fundraiser for veterans’ causes, and the now-defunct Trump University. On Wednesday she called him a “fraud” and said the real estate mogul had taken advantage of vulnerable Americans.

Trump has pushed back. On the education company, he has maintained that customers were overwhelmingly satisfied with the offerings.

While Clinton is stressing her concerns about Trump, she is still dealing with her primary race. She needs just 70 more delegates to win the Democratic primary, but is dealing with a tough fight with rival Bernie Sanders in California.