Election daily: An attack on Trump and hubris in the Clinton camp

Maclean’s Bulldog, Oct. 17: Trump fans aren't laughing and Obama is on a mission. Our daily roundup from the U.S. campaign trail. 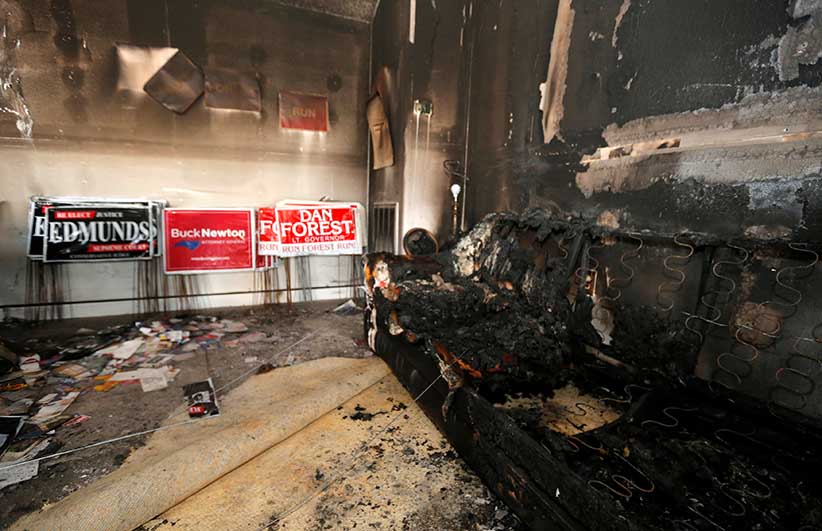 Oct. 17, 2016: Coming back from the weekend, Donald Trump accused the unidentified terrorists who attacked a Republican headquarters as “representing” Hillary Clinton. Meanwhile, Clinton was once again dreaming of a landslide to silence accusations of a “rigged” election, while a poll showed that over 40 per cent of Americans are open to buying such accusations.

While this was going on, President Obama prepared to try and help the state Democrats who lost power during his presidency, and Amy Schumer learned that Trump fans are getting tired of Trump jokes.

Over the weekend, unidentified assailants firebombed a Republican headquarters office in Hillsborough, N.C., throwing a bottle of flammable material through a window. The culprits also were reported to have spray-painted the slogan “Nazi Republicans go home or else,” along with a swastika, on a nearby building in the Orange County area of Hillsborough. No one was hurt, though state Republican executive director Dallas Woodhouse pointed out that people often work “round the clock” at campaign offices, and that the attackers may not have known that no one would be harmed.

Hillary Clinton called the attack “horrific and unacceptable.” But by that time, Donald Trump had already tried to tie her to the bombing: “Animals representing Hillary Clinton and Dems in North Carolina just firebombed our office in Orange County,” he wrote, “because we are winning.” It almost goes without saying that at the time he wrote that, there was no information available, to Trump or anyone else, about who was behind the bombing.

Because the attack was clearly news, but almost nothing was known about who did it, that left the cable news world with a lot of time to fill through speculation. CNN reporter Brian Stelter helpfully explained that “we have no idea who has done this. We don’t know if it’s a Republican, a Democrat, a movement. No idea. Could be some core of extremists, some sort of radical.” He also blamed “the temperature” of rhetoric and added that “Donald Trump is the lead in terms of raising the temperature at this moment in time,” leading to accusations that he was blaming Trump for an anti-Trump attack. Maybe it would have been best to wait a while for some actual information to turn up.

Hillary still looking for that landslide?

After the Democratic national convention, when Trump was at a low point in the polls, the Clinton campaign tried shifting resources to states that Democrats don’t usually win, in the hope of creating an electoral college landslide. That dream seemed to die as Trump became more competitive. But now that his poll numbers are low again, and swing states like Virginia seem out of reach for Trump, the Democrats are once again considering a push in solid Republican states like Georgia and Arizona.

Already there are signs that Clinton is considering the possibility of turning some of these states blue. The communications director for the Democratic Party in Georgia, a state that no Democrat has carried since Bill Clinton in 1992, told the Washington Post that the campaign actually seems to be taking his state seriously this time: “Instead of using Georgia to mobilize people to go to North Carolina, they’re staying in our state. It’s night and day.”

The goal of trying to get a landslide would be to counteract Trump’s talk of a “rigged” election: if Clinton manages to win not only in battleground states, but in states that Republicans almost always win, it would be harder to claim that she won by cheating or that she didn’t have a mandate to govern.

But some commentators are pointing to these plans as a sign of Democratic “hubris.” With several weeks and one debate to go until the election, it’s not at all out of the question that Trump could make another comeback. If he does, then any money Clinton put into Georgia will have been better spent trying to hold onto the states she actually needs to win.

Lots of people think the election could be rigged

Clinton may be looking for a strategy to beat back these “rigged election” theories because a lot of people are open to believing them. A poll taken last week shows that 41 per cent of U.S. voters believe the election could be “stolen” due to voter fraud, and 60 per cent agree with the statement that it’s “necessary to raise questions about the accuracy of the election results.”

Trump isn’t backing down from encouraging his voters to think this way, either. In response to Republicans who have insisted that the election will be fair and called him irresponsible for saying otherwise, Trump replied: “Of course there is large scale voter fraud happening on and before election day. Why do Republican leaders deny what is going on? So naive!” This may be hard for mainstream Republicans to push back against, since many of them have been insisting for years that voter fraud is a serious problem.

Obama to try and win back Congress for Democrats

The Democrats have a good shot at winning the presidency again and maybe even control of the Senate, but the House of Representatives may be out of reach for them even if they have a great November. One reason for this is that most House districts are drawn up by state legislatures, and Republicans controlled most state legislatures during the last round of redistricting. That creates more safe seats for Republicans, and fewer seats Democrats have a chance of winning.

That’s why President Obama has pledged to focus some of his post-presidential career on working with the “National Democratic Redistricting Committee,” a new group chaired by his former attorney general, Eric Holder. The group was not able to assemble in time for the current election, but its aim is to try and push a “coordinated strategy” to help the Democrats get more of a say in the next round of redistricting in 2020.

The goals at this moment, like the group, are a little vague. White House political director David Simas told Politico that Obama will be focused “at the state legislative level,” where Democrats got blown out in the 2010 and 2014 mid-term elections. But the group also plans to work outside the election process, trying to “organize ballot initiatives and put together legal challenges to state redistricting.” Which means that if Democrats still won’t turn out to vote in mid-terms, maybe they can try fixing things in court.

Amy Schumer gets an earful from Trump fans

Star comic Amy Schumer discovered that there are Republicans even in a stand-up comedy audience. During a show in Tampa, Fla., she provoked boos and walkouts when she called Trump an “orange, sexual-assaulting, fake-college-starting monster.” People who walked out informed the Tampa Bay Times that they felt the comedian, whose TV show constantly deals with political issues, had gotten too political.

But Schumer also invited a Trump supporter up onto the stage, and gave him a chance to explain why Trump had his vote. When he said that he’s mostly going Republican because he “can’t trust Hillary,” there were loud cheers from a segment of the audience. Finally, he’d said something even some of Schumer’s fans could agree with.

Recommended reading: At National Review, one of the biggest outposts for anti-Trump conservatism, there have been a few writers who have climbed aboard the Trump Train. Regular contributor Victor Davis Hanson has written a long case for why conservatives should support Trump, mostly because he’ll put more conservatives in important positions than Hillary Clinton would.