Maclean's daily round-up of what happened today on the U.S. presidential campaign trail 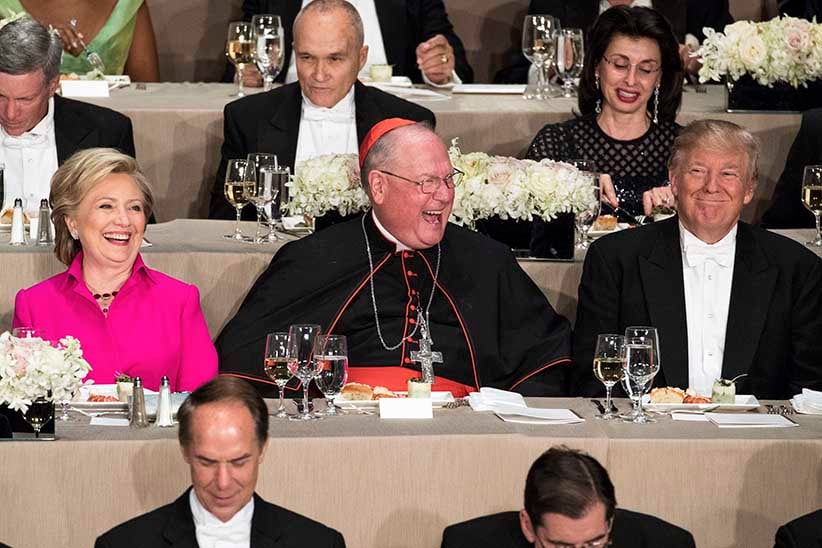 Oct. 21, 2016: The debates are all done with, as is the incessant punditry over who won and lost. And yet, is it possible that Donald Trump lost another event after that? Maybe so. In what may have been their last time on stage together, Trump was booed at the Alfred E. Smith dinner—a light-hearted event filled with self-deprecating humour—for going too far; one of the Smith family members said Friday that Trump “crossed the line.”

While Trump’s team might have been bracing for fallout from his poor comedic taste, Hillary Clinton’s team had to brace for even more WikiLeaks emails, with the latest batch suggesting a potential “pay to play” agreement with the King of Morocco.

It’s as though they didn’t understand what the event was all about. The Alfred E. Smith Memorial Foundation dinner is meant to be a light-hearted event where the two major presidential candidates poke fun at themselves with self-deprecation, while giving only a light-hearted ribbing of their opponent.

And yet, both Clinton and Trump treated the event like an attempted comedy roast of sorts, to the point that Trump himself was even booed. Alfred Smith V, whose family hosts the event, said on Friday that Trump “crossed the line and took it a little too far.”

One of Trump’s worst jokes: “We’ve learned so much from WikiLeaks. For instance, Hillary believes that it’s vital to deceive the people by having one public policy and a totally different policy in private. … For example, here she is tonight, in public, pretending not to hate Catholics.”

At least for Trump, he can take some solace in knowing he had the best joke of the night.

Newly released documents from WikiLeaks suggest Clinton was negotiating a $12-million pledge from King Mohammed VI of Morocco to the Clinton Foundation in exchange for her appearance at the Clinton Global Initiative summit in Morocco. While Clinton never ended up making an appearance at the summit, the email hack led Trump to calling it “pay-for-play” politics on his opponent’s part.

Another 247 pages of Clinton’s emails were released on Friday, but this time it wasn’t from a WikiLeaks hack. The State Department released the emails as part of a court order from the investigation into Clinton’s email server. Most of the emails were rather mundane—like scheduling phone calls—or were asking someone to print something. Nothing scandalous per se, at least not yet.

The audio of Trump’s lewd mark that he made behind the scenes of Access Hollywood in 2005 might very well have ruined any chance he had at becoming president. But now he’s trying to keep the remarks out a civil lawsuit against Trump University that’s set to begin in late November.

The class action lawsuit largely stems around fraud, so it’s unclear exactly how his lewd remarks about women would be relevant in court—except that it could be embarrassing and perhaps speak to his character.

During a ceremony celebrating Mother Jones magazine’s 40th anniversary, Steele said: “[Trump has] captured that racist underbelly, that frustration, that angry underbelly of American life and given voice to that.”

Steele’s decision to not support the Republican nominee is not unprecedented for a former RNC chairman either; he’s the third in this election campaign alone.

Of Trump’s many feuds during this presidential campaign, few were more heated than that between Trump and Khizr Khan, the father of the fallen Muslim-American soldier Capt. Humayun Khan.

While the Khan family has largely laid low in recent months after speaking at the Democratic National Convention and offering to lend Trump his copy of the U.S. Constitution, the Clinton campaign unveiled one ad with the Khan family on Friday.