Election Daily: Could Donald Trump have a lifeline? 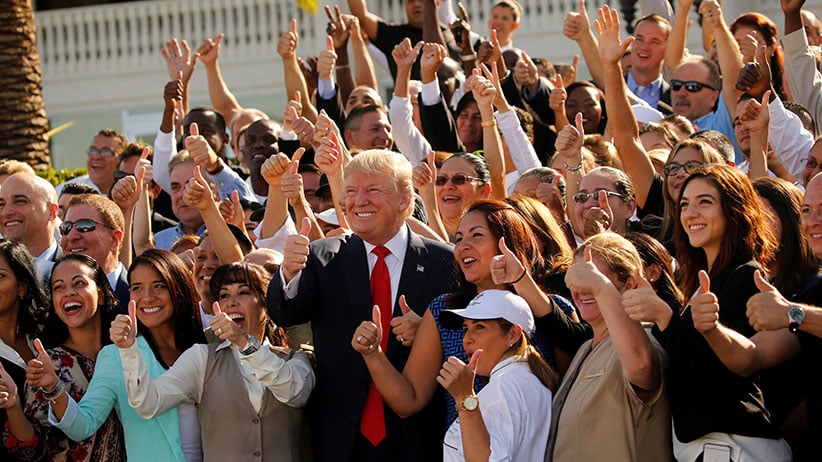 Oct. 25, 2016: Donald Trump is still losing badly in the polls, but the Republican nominee may have one last game-changer that could turn the tide: the rising cost of Obamacare. Hillary Clinton, meanwhile, got the support of a famous four-star general on Tuesday: George W. Bush’s former Secretary of State Colin Powell. And if you think this has been a negative election campaign, just wait until you see how much negativity there was in the news toward both candidates—especially Trump.

Trump gets a lifeline: Obamacare

Democrats may have a real problem with the Affordable Care Act, as the government announced its premiums will rise in every state next year, by an average of 22 per cent. The news only gives Trump more fuel to attack Obamacare, saying on Tuesday: “It’s blowing up all over the country.”

Trump made his case for repealing and replacing Barack Obama’s marquee piece of legislation, telling attendees at his Florida rally—located at Miami’s Trump National Doral golf club—that his own employees were “having a tremendous problem with Obamacare.” But as Trump moved into his next talking point, jobs, he seemed to contradict himself by saying his companies provide health care for its employees—and therefore wouldn’t need Obamacare. “This is what jobs do. Jobs just make lives and they make people and they make families and they’re not worried about their health care because we take great care of people.”

So do they have Obamacare problems, or don’t they? A reporter asked Trump afterwards, to which he replied: “Some of them, most of them, no.”

Either way, if Trump can hammer home the faults of Obamacare, he may have one last avenue to speak to undecided voters: how a Trump presidency might affect their pocketbook.

Clinton knows she’s up in the polls, but she’s also aware that if she wins Florida she’s a virtual lock to win the presidency. At her rally in Coconut Creek, Fla. on Tuesday, the Democratic nominee told her supporters to not pay attention to the polls—as they might lead some of them to not vote, thinking her winning is a foregone conclusion. So she’s battling complacency with convenience. Her rally had a big banner with the words “Vote Early,” and to make things easier, she said that the library across the street accepted early voting—and people could go vote right that very instant.

Bad news might be better than no news—but what about just hours and hours of bad news? A new study by the Media Research Center found Trump received vastly more news coverage than his political rival, but 91 per cent of the coverage was negative toward the Republican nominee.

That’s not to say the coverage of Clinton was all happy-go-lucky; 79 per cent of opinionated statements toward her were negative. But when it comes to total minutes, Trump has Clinton beat handily.

It’s not quite as flashy as a cable news network, but Trump’s team has started its own nightly broadcast from the campaign war room at the Trump Tower. The idea is to reach Trump supporters directly—60,000-plus tuned in a few minutes after it started—without having to go through mainstream media, which Trump has long called corrupt.

With campaign manager Kellyanne Conway as one of the guest panelists on day one, the coverage promised to included special guests like Trump’s kids in its future.

As for a real television network, Trump said Tuesday in a radio interview: “I have no interest in Trump TV…I have interest in making America great again.”

They’re not rigged, as Trump claims, but that doesn’t mean he’ll like what he sees. New polls released on Tuesday found Trump trailing by five points nationally, seven points in North Carolina, and, in Arizona—which has voted Republican in 15 of the past 16 elections—Trump’s lead is down to a single point.

Even George W. Bush’s former Secretary of State, Colin Powell, announced Tuesday he’d be voting Clinton. Why? “Because I think she’s qualified, and the other gentleman is not qualified,” he said.

Meanwhile, the New York Times’ blog The Upshot writes that the odds that Clinton loses are the same odds an NFL kicker misses a 30-yard-field goal. This is noteworthy after last weekend’s final score of 6-6 between the Arizona Cardinals and Seattle Seahawks, where kickers on both sides missed much easier kicks in overtime. Trump just might take those odds.

Donald Trump’s twitter account made an appearance in the most recent Jimmy Kimmel segment of “Mean Tweets”—this one featuring Barack Obama.

Recommended reading: Can Clinton win back the white working class voter for the Democrats? Read The New Yorker’s “Hillary Clinton and the Populist Revolt.”