Election Daily: Donald Trump and the sex tape (not his!)

Maclean’s Bulldog, Sept. 30: Trump shows off his poor temperament in some early morning tweets, while Clinton pulls away in key states. 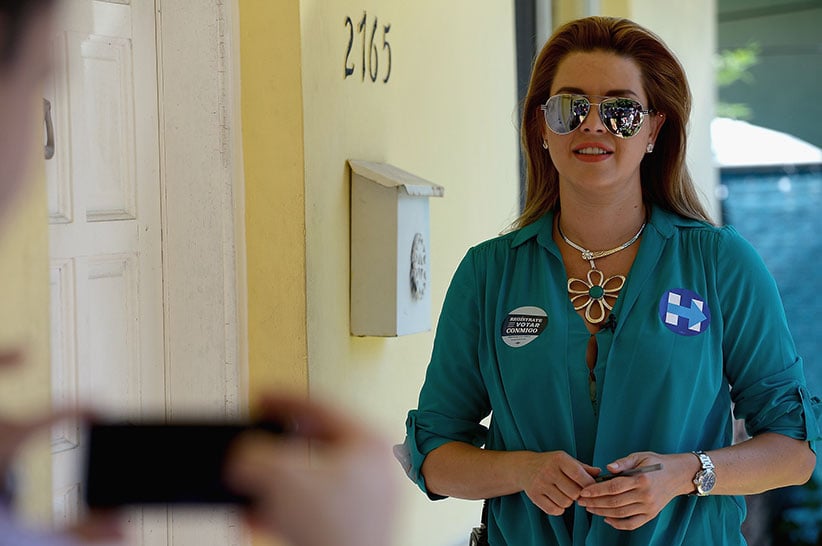 Sept. 30, 2016: During Monday’s debate, Donald Trump talked about his amazing temperament, but he didn’t show it off early Friday morning. Instead, in the early morning, he sent out a series of tweets smearing a former Miss Universe winner, Alicia Machado, suggesting there’s a sex tape out there for people to find. Meanwhile, Hillary Clinton finished a strong week by surging in the polls—especially those in key battleground states—and earning newspaper endorsements (or at least not losing endorsements to Trump).

Donald Trump and the sex tape (not his!)

Trump was up very early Friday morning to fire off a series of tweets attacking former Miss Universe winner Alicia Machado, calling her “disgusting” and encouraging his followers to look into her past—which includes an alleged sex tape.

Wow, Crooked Hillary was duped and used by my worst Miss U. Hillary floated her as an "angel" without checking her past, which is terrible!

Using Alicia M in the debate as a paragon of virtue just shows that Crooked Hillary suffers from BAD JUDGEMENT! Hillary was set up by a con.

Did Crooked Hillary help disgusting (check out sex tape and past) Alicia M become a U.S. citizen so she could use her in the debate?

Machado was the latest person to speak out against Trump because—as Clinton brought up during the debate—Trump called her “Miss Piggy” and “Miss Housekeeping”—a reference to her Latina background. Machado did pose nude for a Mexican edition of Playboy in 2006, but there is no sex tape.

In response, Clinton tweeted that her opponent’s firestorm of attacks were “unhinged, even for Trump.” Machado, meanwhile, replied on Instagram saying the “slanders and false accusations” are Trump trying to “intimidate, humiliate and destabilize me.”

As for Trump, he too had a rebuttal to the complaints.

For those few people knocking me for tweeting at three o'clock in the morning, at least you know I will be there, awake, to answer the call!

Clinton’s campaign announced plans for a new “national service reserve,” hoping to enlist five million Americans—particularly those aged 18-30—into the program that helps responses to natural disasters. The reserve would work with companies and universities to allow volunteers paid time off for school credits. The announcement was made in Florida, where Clinton continues to appeal to Millennials who currently support third-party candidates.

Clinton is starting to retake the lead in key swing states, leaving Trump little room for error if he is to win in November. A Suffolk University poll found Clinton ahead of Trump by six points in Nevada, another poll of New Hampshire had Clinton up by seven points, and a Mason-Dixon poll of Florida voters had Clinton up four points.

Speaking of Florida, a virtual must-win for the Republicans, one of Trump’s advisers resigned, telling Bloomberg: “It is clear the campaign is now going in a direction I am no longer comfortable with and I have decided to move on.”

The Commission of Presidential Debates released a one-sentence statement on Friday: “Regarding the first debate, there were issues regarding Donald Trump’s audio that affected the sound level in the debate hall.”

Trump had alluded to the problem right after the debate, even floating the idea it was done deliberately. The fact that the commission admitted to a problem altogether should only provide fodder for that theory.

USA Today doesn’t normally endorse candidates for president. But in Friday’s editorial, the newspaper broke with tradition, encouraging its readers to vote for Clinton or a third-party candidate. “Whatever you do, however, resist the siren song of a dangerous demagogue,” the editorialists wrote. “By all means vote, just not for Donald Trump.”

Also this week, the Arizona Republic newspaper endorsed Clinton, the first time in its 126-year history it endorsed a Democrat. The Chicago Tribune endorsed Libertarian Gary Johnson, as did the Detroit News (a first for the 143-year-old paper, which has always endorsed Republicans). Add that to the conservative newspapers Cincinnati Enquirer, Dallas Morning News and a Wall Street Journal columnist endorsing Clinton.

Trump’s response to the lack of support?

The people are really smart in cancelling subscriptions to the Dallas & Arizona papers & now USA Today will lose readers! The people get it!

Trump’s charity, the Donald J. Trump Foundation, doesn’t have the proper certification to solicit money from donors, according to a report from the Washington Post. In fact, it’s possible the Trump Foundation could be ordered to stop raising cash and perhaps even return the money it’s already raised. While that sounds a bit drastic, Trump’s charity has been raising a few eyebrows of late for using funds to buy a portrait of Trump—and also help settle his lawsuits.

Recommended reading: One of Clinton’s biggest scandals revolves around her emails. But what about them? What happened? How did she mess up so badly? Politico tells you all you need to know about the full, strange story of Hillary Clinton’s e-mail server.