Maclean’s Bulldog, Nov. 2: State polls are moving in Trump's favour, but the needle may not be moving fast enough 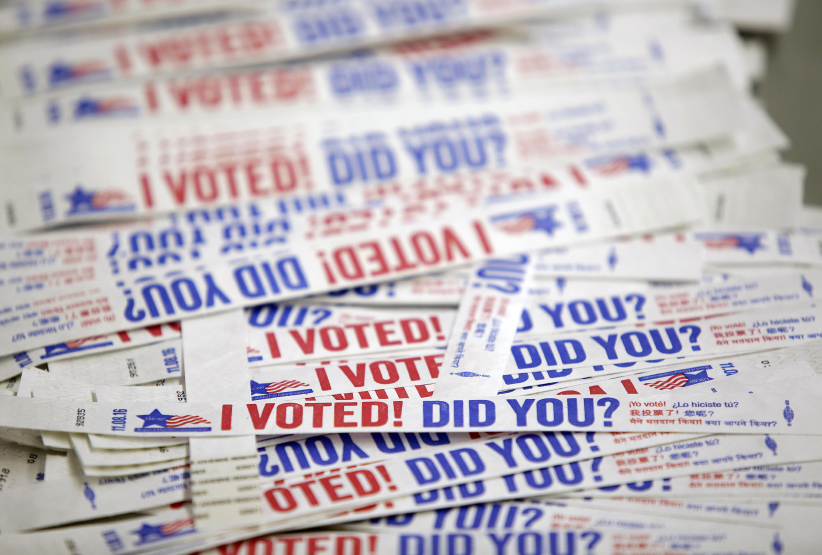 Wrist bands for voters after they cast their ballot are seen during early voting at a polling station in Chicago. (Joshua Lott/AFP/Getty Images)

Nov 2, 2016: Early voting numbers are starting to trickle in, and while some favour Hillary Clinton, they also show an apathy among the African-American voters she so desperately needs in key swing states. Meanwhile, Donald Trump has opened up his lead in polls for several battleground states, but he needs the momentum to bleed into states like Wisconsin, Colorado or New Hampshire if he’s going to pull off an incredible comeback. One person who’s campaigning hard to stop him: Barack Obama.

After eight years of Obama in the White House, African-Americans don’t have the same kind of enthusiasm for Clinton that she might need to win the election. In North Carolina, for example—where Obama was campaigning for Clinton on Wednesday—early voter turnout among African-Americans is down 15 per cent compared to four years ago, according to the New York Times, while white voter turnout is up 15 per cent. Meanwhile, in Florida—another swing state where a Clinton victory would all but assure her the presidency—African-Americans made up 15 per cent of early voters, down from 25 per cent four years prior, according to the Times.

But if there is any good news for Clinton from early voting numbers, it also comes from Florida, where a poll by TargetSmart/William & Mary  found she was outpacing Trump among early voters by 17 points, 55 to 38 per cent. Not only do those numbers reflect well on Clinton’s ground game in the battleground state, but the same poll found that 28 per cent of Republican early voters opted to vote Clinton over Trump. Call it a good head start for the Democrats as Election Day looms.

Polling good news/bad news (depending on who you support)

The latest tracking poll from Washington Post/ABC News had Clinton and Trump tied in a dead heat nationally—each garnering 46 per cent of vote preference from likely voters. But what really matters is electoral votes earned by winning individual states, which is where there appears to be more separation.

The good news for Clinton is that she leads in vote-rich Pennsylvania by four points, according to a CNN poll, and holds a slight two-point lead in the key swing state of Florida. In Wisconsin, she also has a solid six-point lead, according to a Marquette Law School poll, while she’s up three points in North Carolina, according to a Quinnipiac University poll.

The good news for Trump is not only that he’s closing in on Clinton in many states, but the fact that he’s opened up a five-point lead in Arizona—a typically Republican state that some feared could turn Democrat this election—and has a six-point lead in Nevada, according to CNN polling. Meanwhile in Ohio, a key swing state, a Quinnipiac University poll has him up five points. All told, according to polling analysis site FiveThirtyEight’s polls-plus forecast, Trump might be only one state away from winning this thing.

As for Colorado—which could be the deciding state according to this chart from FiveThirtyEight—a newly released Emerson College survey gives Clinton a three-point lead. 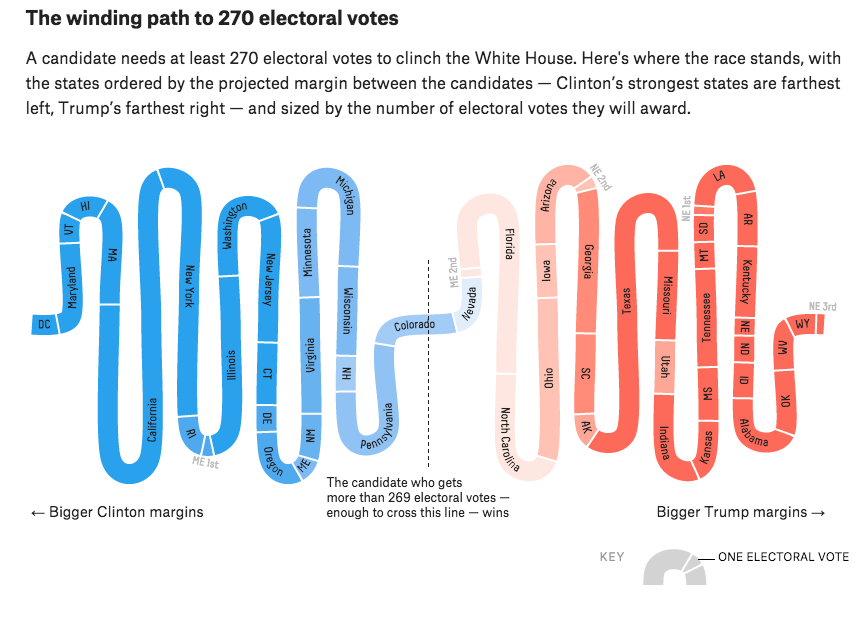 Clinton’s camp appears to have been likely kept abreast on any developments on her email scandal, namely because a Department of Justice official gave them a “heads up” according to the subject heading in an email to Clinton’s campaign manager.

In the latest unveiling of hacked emails belonging to John Podesta obtained by WikiLeaks, Peter Kadzik, a Justice Department assistant attorney general, wrote in May 2015: “There is a [House Justice Committee] oversight hearing today where the head of our Civil Division will testify. Likely to get questions on State Department emails. Another filing in the [Freedom on Information act] case went in last night or will go in this am that indicates it will be awhile (2016) before the State Department posts the emails.”

The potential conflict of interest was yet another storyline for Trump to grab for his Wednesday rally, where he said: “The spread of political agendas into the Justice Department—there’s never been a thing like this that has happened in our country’s history—is one of the saddest things that has happened to our country.”

Obama on the email investigation

But rather than flat-out criticize Comey’s decision on the campaign trail, Obama spent Wednesday in North Carolina telling a rally—with no innuendo whatsoever—”We don’t win this election, potentially, if we don’t win North Carolina.” He soon added: “The fate of the republic rests on your shoulders.” No pressure, right?

There was a time not long ago when the Republican National Committee figured buying up ad time for Trump wasn’t the wisest use of its funds. But with Trump closing in on the polls with less than a week to go, the RNC is injecting $3 million into TV ads for the Trump team, according to Politico.

Not surprisingly, some of the Trump campaign’s latest ads hammer home the FBI’s reopening of its investigation.

If there ever was a sign of Republican weariness for Trump, it’s the fact that former president George W. Bush could well vote for Clinton in this election—according to his own nephew. If that’s the case, he may well be joined by his father, former president George H.W. Bush, who Politico reported in September was leaning toward casting a Clinton vote, too. Neither of the two former Republicans have outright said they’d be voting Clinton, but then again, neither of them have told anybody they’re voting Trump.

Don’t vote for me

On paper, Bill Weld is running to become the vice-president of the United States, joining the ticket of Libertarian Party nominee Gary Johnson as the prime third-party candidates in this election. On screen, however, it appears as though Weld is looking to avoid becoming a spoiler vote that would put Trump in office.

Recommended reading: With a massive lead in the polls, Hillary Clinton’s plan going into the final week of the campaign was to tell voters why they should vote for her—and not only against Trump. “When they go low, we go high,” she’d say at campaign rallies. Then the FBI reopened its investigation into her email server scandal and the polls quickly tightened. Clinton’s new challenge? According to this new read from CNN: “Make Trump unacceptable again.”