Maclean’s Bulldog, Oct. 3: Trump has more money problems—from taxes to charity—while Clinton gets an endorsement from a "King" 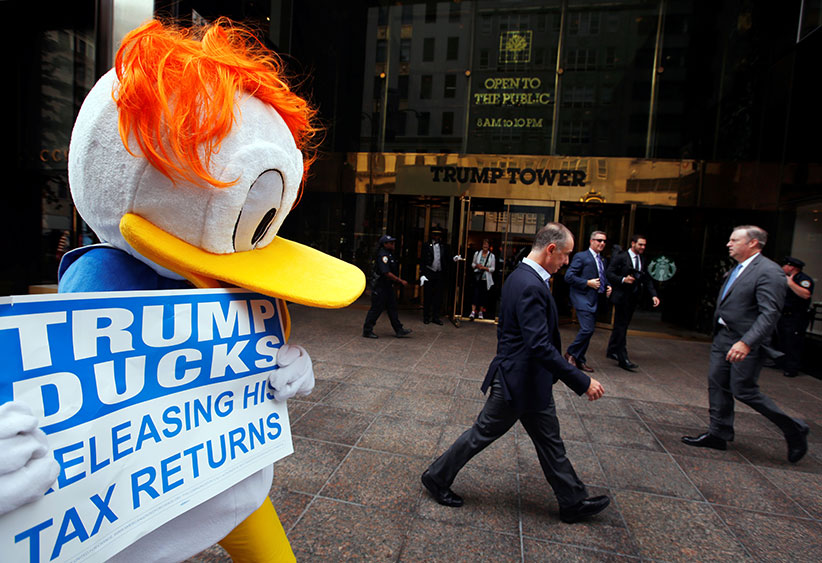 Oct. 3, 2016: One week after the first presidential debate, Donald Trump has more than a feud with a former Miss Universe winner to worry about. Hillary Clinton’s camp is jumping on a New York Times article about a few pages of Trump’s old tax returns and found he could have gone 18 years without paying Uncle Sam. Meanwhile, Trump’s charity was ordered to stop soliciting donations in New York for failing to properly register and a number of former The Apprentice crew and contestants claimed Trump showed sexist behaviour behind the scenes at his reality show.

Clinton not only continued her rise up the polls, but in Ohio she got a front-page endorsement from the state’s most famous celebrity: NBA superstar LeBron James.

As sure as death and taxes—and loopholes

Trump has refused to release any of his tax records so far, but the New York Times got hold of three pages of them over the weekend. One document from Trump’s 1995 income tax returns showed he declared a $916 million loss, which tax experts said may have allowed for future tax deductions so big that it’s possible the Republican presidential nominee could have gone 18 years without paying any federal income tax.

Trump’s backers, such as former New York City mayor Rudy Giuliani, praised Trump, telling CNN that “the man’s a genius,” adding later: “He knows how to operate the tax code for the people that he’s serving.” Meanwhile, New Jersey Gov. Chris Christie said, “This is actually a very, very good story for Donald Trump,” noting how Trump fought back to become a major job creator.

But it’s not such a good story for Trump that it stopped Clinton from attacking the Republican presidential hopeful on Monday. “He’s been dissing America in this whole campaign. He talks us down, makes disparaging comments about our country, calls our military a disaster,” she said. “It’s not, but it might have been if everyone else had failed to pay taxes to support our great men and women in uniform.” And in a shot at Trump’s business acumen, Clinton added: “What kind of genius loses a billion dollars in a single year?”

Charity begins at the proper paperwork

Trump’s charity was ordered to stop fundraising in the state of New York on Monday after reports surfaced last week that the Trump Foundation solicited donors without having filed the proper registration. On Monday, the Office of the Attorney General for the State of New York served the Trump Foundation a notice of violation, saying it was not registered with the Charities Bureau, which requires annual financial reports and audited financial statements.

A Trump campaign spokesperson said in a statement: “While we remain very concerned about the political motives behind [attorney general] Schneiderman’s investigation, the Trump Foundation nevertheless intends to co-operate fully with the investigation.”

Taking his talents to Clinton

Normally an athlete’s endorsement of a candidate for president wouldn’t do much heavy lifting. But in Ohio—which just so happens to be a crucial swing state—there is one athlete whose status far exceeds his on-court pedigree: LeBron James. When King James—a native of Akron, Ohio, and the leader of the recent NBA championship-winning Cleveland Cavaliers—chimes in on the presidential race, it gets front-page treatment in the print edition of the Akron Beacon Journal.

.@KingJames endorsement of @HillaryClinton on cover of his hometown Akron Beacon Journal this morning. pic.twitter.com/pbgf6TtiEY

“Only one person running truly understands the struggles of an Akron child born into poverty. And when I think about the kinds of policies and ideas the kids in my foundation need from our government, the choice is clear,” James wrote in his editorial, which was also published online on Business Insider. “That candidate is Hillary Clinton.”

And as it so happens, Clinton visited Ohio on Monday for the first time in weeks to talk about her economic proposals.

Hardly a veteran move for Trump

In a Q&A session in Virginia, when asked about the issues of post-traumatic stress disorder and veteran suicide, Trump said under his presidency he would contribute more assistance to the mental health of veterans. But some are accusing Trump of suggesting those living with PTSD aren’t “strong.”

“When people come back from war and combat—and they see things that maybe a lot of the folks in this room have seen many times over and you’re strong and you can handle it, but a lot of people can’t handle it,” Trump said. “And they see horror stories. They see events that you couldn’t see in a movie. Nobody would believe it.”

Some organizations helping those with PTSD quickly chimed in, saying some of the strongest people out there are veterans with the disorder. Quick to Trump’s defence, one of his advisers said matter-of-factly on CNN that strong veterans do, indeed, face PTSD. And in a statement to Buzzfeed, Lt. General Michael Flynn said the media took Trump’s words out of context, adding “[Trump] has always respected the service and sacrifice of our military men and women—proposing reforms to Veteran Affairs to adequately address the various issues veterans face when they return home.”

Clinton pulling away in the polls

Now that America has had time to digest last week’s debate, and witness Trump spending his early mornings feuding with a former Miss Universe winner, the polls in key swing states are decisively pulling in Clinton’s favour. A Monmouth poll of Colorado has Clinton up 11 points, while Quinnipiac polls have Clinton leading in Florida (up five points), North Carolina (up three points) and Pennsylvania (four points). Trump, however, still leads in Ohio by five points.

Stand by your man

It seems it was only a matter of time before Trump brought up the infidelity scandal that plagued the Clintons during Bill’s presidency. But, in an odd and unsubstantiated twist, Trump accused Hillary of cheating. “I don’t even think she’s loyal to Bill, if you want to know the truth,” Trump said. “And really, folks, really, why should she be?”

Coming to Trump’s defence, Rudy Giuliani said the comments were fair game in a CNN interview. One of Clinton’s senior advisers, meanwhile, commented on Monday on Trump’s words, saying “there seems to be no limit to the shameless lows Donald Trump can go to in this campaign.”

Libertarian vice-presidential nominee Bill Weld would like to clarify one thing: he thinks his running mate, Gary Johnson, would be the best president for the United States. Monday’s clarification came after a Friday interview with Weld, who, when asked if Johnson is more qualified to be president than Clinton, replied: “I’m not sure anybody’s more qualified than Hillary Clinton to be president of the United States. I mean, that’s not the end of the inquiry, though.”

The rise of Trump’s celebrity status came in large part thanks to his widely successful reality TV show The Apprentice. But in an Associated Press investigation published Monday, former crew members and contestants remembered how Trump “repeatedly demeaned women with sexist language.” They claim Trump “rated female contestants by the size of their breasts and talked about which ones he’d like to have sex with.” Read the whole AP story here: “Apprentice” cast and crew say Trump was lewd and sexist.