Election Daily: How Trump is rebuilding his star power

Maclean’s Bulldog, Oct. 26: On her 69th birthday, Hillary Clinton learns she has terrible instincts—according to her own campaign team 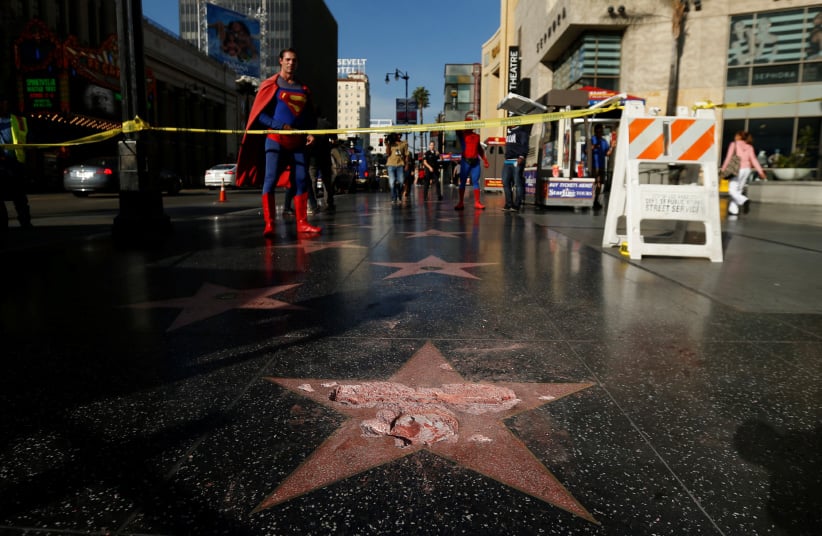 Donald Trump’s star on the Hollywood Walk of Fame is seen after it was vandalized in Hollywood, California (Mario Anzuoni/Reuters)

Oct. 26, 2016: Donald Trump likes to call himself a businessman, not a politician. On Wednesday, he proved that by showing up for the ribbon-cutting of his new Trump International Hotel in Washington D.C.—a break from the typical battleground state rally one might expect from a politician trailing in the polls with two weeks to go. And on her 69th birthday, Hillary Clinton’s instincts were called into question not by Republicans, but rather her own campaign manager, in hacked emails unveiled by WikiLeaks.

And in a presidential campaign marred by violence and dangerous rhetoric at rallies, vandalism is also sadly setting in—including someone destroying Trump’s Hollywood Walk of Fame star with a pickaxe.

Down in the polls and desperately trying to drum up support at rallies in battleground states, Trump made a special visit to Washington, D.C.—which, as a Democratic stronghold, is the furthest thing from a swing state—so that he could be on hand for the official grand opening of his Trump International Hotel. Trump gave a few remarks from the “presidential ballroom” where he hailed the project for opening ahead of schedule and under budget, saying: “Today is a metaphor for what we can accomplish for this country.”

All the while, Clinton was campaigning in Florida—a must-win state for Trump—where her rally featured a special guest: celebrity chef José Andrés.

Why him? Well, Andrés was originally supposed to have a restaurant in Trump’s D.C. hotel, but he backed out last year after hearing Trump’s comments toward Mexicans and immigrants. Trump is suing him. He’s countersuing Trump. Another metaphor, perhaps?

Trump is often one to cite polls that show him in the lead, but in recent days he hasn’t had much to boast about; nearly every major poll had him trailing both nationally and in key swing states. But Wednesday came with some good news for the Republican nominee as the L.A. Times’ latest national poll had him ahead of Clinton by a point and a Bloomberg poll saw Trump with a two-point lead. Then in New Hampshire, Clinton has closed the gap to four points in a Monmouth University poll, which had Trump down by nine points a month ago.

It’s enough to give Republicans hope he might just be able to turn this thing around. As it stands, according to a new CNN poll which asked voters who they think will win this election—not who they support—68 per cent figured Clinton will emerge victorious come November.

Trump has long accused the media of having a bias in favour of Clinton. He’ll have more fuel to those claims as a WikiLeaks dump on Wednesday found that back in the summer of 2015 a Clinton ally named Neera Tanden told her campaign manager, John Podesta, about how they should try to meet the New York Times’ publisher for coffee and perhaps sway the paper into giving them more favourable coverage.

“When Bloomberg was having problems w the times he called Arthur Schulzberger and asked for coffee,” Tanden’s email wrote, spelling the publisher’s surname incorrectly (It’s Sulzberger). ““He made the case that they were treating him like a billionaire dilettante instead of Third term mayor. It changed the coverage moderately but also aired the issues in the newsroom so people were more conscious of it.”

He later added: “Hillary would have to be the one to call.”

“Almost no one knows better me that her instincts can be terrible.”

It sounds like something Trump would say about his political opponent, but it’s actually the words of the aforementioned Clinton ally Neera Tanden in a September 2015 email to Podesta.

Granted, as the WikiLeaks hack showed, Podesta has described Clinton of having poor instincts in the previous email: “We are still way more likely than not to win nomination. We’ve taken on a lot of water that won’t be easy to pump out of the boat,” he wrote. “Most of that has to do with terrible decisions made pre-campaign, but a lot has to do with her instincts.”

The emails, which have been teased out over the course of the election campaign, show a worried backroom—with allies trying to find the best way for Clinton to handle her email server controversy and her lack of transparency.

As more emails roll out, it only offers Trump more fuel for his rallies.

Wednesday was Clinton’s 69th birthday—but her celebration came a day earlier when she took Tuesday night off to watch Adele perform at a concert in Miami. Perhaps as an early birthday gift, Adele urged the crowd not to vote Trump: “I’m a 100 per cent for Hillary Clinton, I love her, she’s amazing.”

Trump used the concert as further proof of media bias, saying he was criticized in media circles for taking time away from battleground states to help open his D.C. hotel, but Clinton didn’t get the same kind of flak for taking a night off to listen to music.

While Clinton won’t get Adele’s vote—the singer is British—Clinton did get another endorsement from actor James Franco, who released a new pro-Clinton ad calling her, “The most interesting woman in the world.”

At least for the moment, Trump’s name is no longer on the Walk of Fame in Hollywood. Early Wednesday morning, a man in construction-worker garb showed up with a pickaxe and sledgehammer and proceeded to rip Trump’s star apart.

According to Deadline, the man said he was planning to rip out the star entirely and auction it off, with proceeds going to the women who are accusing Trump of sexual assault.

Someone dressed as a construction worker took a sledgehammer to Trump's star on the Hollywood Walk of Fame. Ppl don't play. #TheCruzShow pic.twitter.com/MfDxWpUi9z

Police have opened a vandalism investigation and the Hollywood Chamber of Commerce said the star will be completely replaced.

Let’s hope it’s not the start of a dangerous anti-Trump vandalism trend.

Man wearing only his underwear takes blowtorch to his neighbors' Trump sign — and they caught it all on camera https://t.co/XxdHdjAveM pic.twitter.com/mwWFZAwlBI

Recommended reading: In case you haven’t noticed, Trump has not been faring very well in terms of newspaper endorsements. In fact, across the entire country, Politico has found just six of them: “These Are the Only 6 Newspapers in the Country to Endorse Donald Trump.”