Maclean's Bulldog, Oct. 6: Our daily roundup of what went down on the campaign trail 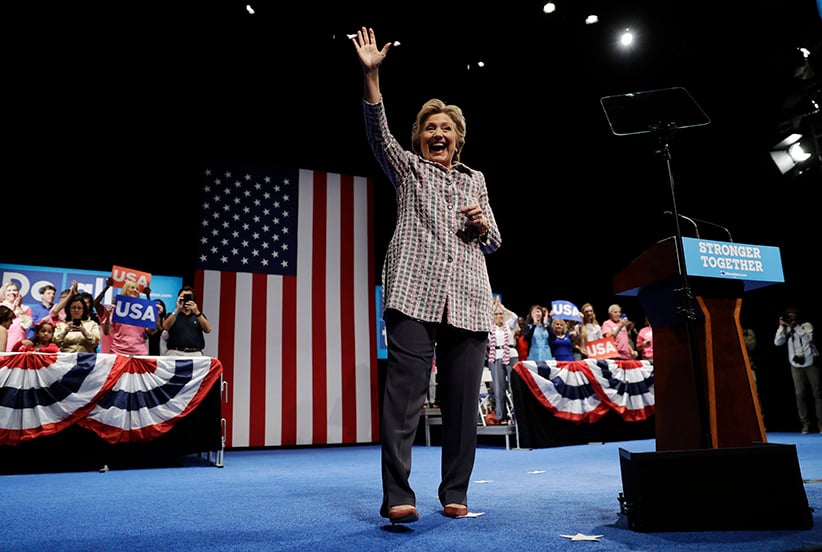 Oct. 6, 2016: The campaign took a backseat to Florida, where hurricane Matthew is expected to hit on Friday. But amid the state’s emergency preparations, the Clinton camp had to weather a mini-scandal brewing when it was found it they bought ads to appear on the Weather Channel in Florida over the weekend. Trump, meanwhile, took some flak for telling Nevadans it’s pronounced “Ne-VAAH-Da. (It’s not.) He also attributed his previous insulting comments toward women—back before he thought about being a politician—as being “for the purpose of entertainment.”

Florida has more important things to worry about politics. Hurricane Matthew is approaching—and so, when Republicans found out Clinton had $63,000 worth of ad buys set for the Weather Channel in the state, they pounced. Eric Trump, Donald’s youngest son, called the tactic “evil and sick.” Clinton’s camp, meanwhile, said they had ad buys for hundreds of stations across the state, and that asked the Weather Channel to delay the pro-Clinton ads until the after the storm had passed. In a must-win state for Trump, Clinton doesn’t want to disturb her current three-point lead, according to a new poll.

Trump gave a quick lecture Wednesday evening at a Nevada rally, where he took a moment to emphasize how to pronounce their state’s name. The only problem is Trump was wrong.

It turns out locals pronounce it Neh-VAD-ah, not Neh-VAAH-da as Trump claimed. Also, why is Trump telling Nevadans how to pronounce the name of their own state?

Trump has said some pretty bad things about women over the years, most of them long before his recent foray into politics. So when a Las Vegas journalist asked him about women, body image, and explaining his previous derogatory remarks, Trump replied that “a lot of that was done for the purpose of entertainment.” Now that he’s struggling to get the women’s vote—and he’s not doing himself any favours with spats with former Miss Universe winner Alicia Machado, Megyn Kelly, and Rosie O’Donnell, it seems demeaning women isn’t so entertaining for him anymore.

Speaking of Machado, she was the talk of the country after the first presidential debate as Trump’s previous comments about her weight and ethnicity became the latest in his growing list of issues turning away female voters. But with just over a month until Election Day—and mere days until the second presidential debate—Machado’s team is reportedly turning away all comments about Trump and refusing to discuss it any longer. Instead of denying or apologizing for his alleged comments about Machado—“Miss Piggy” and “Miss Housekeeping” among them—Trump made it known that her weight gain years ago was a problem and suggested (falsely) that she starred in a sex tape.

In fact, CNN found that Trump appeared (fully clothed) in several Playboy videos, in 1994 and 2000, interviewing the models—also fully clothed—and snapping photos of them.

While Republican house Speaker Paul Ryan has endorsed Trump, the two haven’t exactly been super chummy. Ryan was slow to fully support Trump’s bid, even when he became the Republican Party’s nominee, and he hasn’t been secretive when he’s disagreed with any of Trump’s controversial comments. But this weekend, with Trump needing a boost in the polls, Ryan will reportedly appear alongside the Donald for the first time on the campaign trail during a rally in Ryan’s home state of Wisconsin. Better late than never?

Trump no longer supports a ban on Muslims, says not Trump

From his vice-presidential adversary to journalists, Trump’s running mate Mike Pence has consistently been asked in recent days about stances that Pence is known to be against—and Trump has said he’s for. The most recent example came in a CNN interview when Pence was asked about Trump’s proposed temporary ban on Muslim immigrants. Why does Pence not condemn it, he was asked? “Because it’s not Donald Trump’s position now.” The next person who needs to say that: Trump.

Taking a Chance on Clinton

The latest in celebrity endorsements: Buzzy Chicago MC Chance the Rapper has backed Clinton for president. That could help her make some inroads with African-American voters. Also backing Clinton? Third Eye Blind lead singer Stephan Jenkins who, during the Republican national convention, played a show in Cleveland and mocked Republicans in the crowd. Jenkins could help her make inroads in the less influential demographic of ’90s pop rock diehards. You remember Third Eye Blind, right?