Maclean’s Bulldog, Nov. 1: Hillary Clinton goes out on the stump to remind voters of her opponent's sexist past 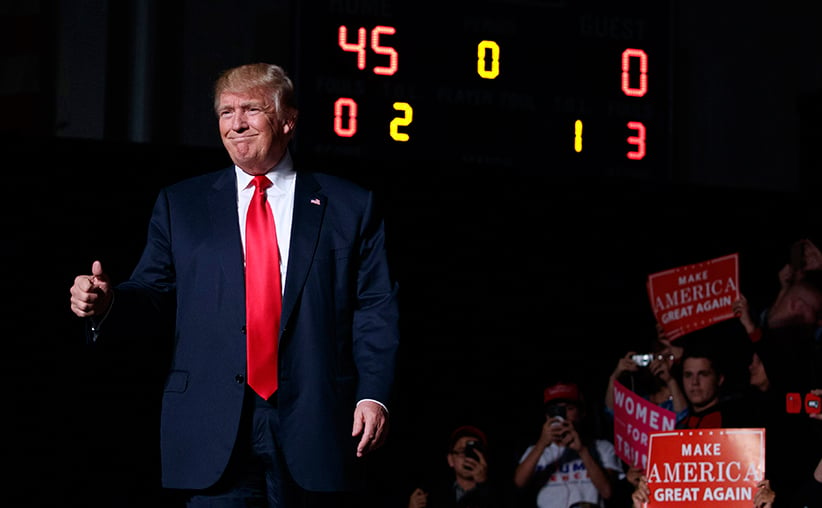 Nov 1, 2016: Donald Trump is talking about the polls again—and this time it’s not about how rigged they are. Now that a tracking poll from the Washington Post has Trump up by a single point on Hillary Clinton nationally, there’s optimism in his camp he might be able to win the battleground states that are key in the race to 270 electoral votes.

And as Clinton deals with the aftermath of her email scandal resurfacing, she’s trying to remind voters of Trump’s many, many offensive comments toward women throughout his life, with a former Miss America by her side.

Trump still hasn’t released his tax return, the first presidential candidate in 40 years not to do so, but the New York Times has some insight on just how Trump could have avoided paying tens of millions in federal taxes. First, as the Trump empire started to crumble financially in the early 1990s, Trump convinced financial backers to forgive hundreds of millions in debt that he couldn’t repay. But then, to avoid the IRS from considering his debt forgiveness as a taxable gain—which it normally would—he could use a “partnership equity-for-debt swaps” which would make it appear at though his forgiven debt was repaid, not cancelled, and Uncle Sam would be none the wiser.

It’s legally dubious, the Times writes, and could have been used up until 2004. That’s when members of Congress—then-New York senator Hillary Clinton among them—voted to close the loophole.

But while Trump may be in the clear in the U.S., he might not be south of the border, where a Mexican government official launched a complaint of Trump allegedly not paying taxes on the pre-development of his failed Trump Ocean Resort real estate project in Tijuana.

Trump is tweeting about the polls again…

After weeks of calling polls rigged, they must be starting to look favourably upon Trump if he’s going to boast about them again. And they are. One week ago, the Washington Post-ABC national tracking poll had Clinton up 12 points. Come Nov. 1, the poll had Trump up a single point.

In other good news for the Republican camp, Trump is now tied with Clinton in North Carolina according to an Elon University poll conducted entirely before news of Clinton’s returning email server scandal; Trump even holds a rare two-point lead in a New Hampshire poll conducted by the New Hampshire Journal.

If Trump can pull off wins in Ohio, Florida, Nevada and North Carolina, then a win in New Hampshire would put him in the Oval Office. That’s a tall ask, but at least a path might now be within sight.

…but Clinton still has the polling advantage

According to RealClearPolitics polling averages, Clinton leads in Wisconsin and Pennsylvania by six points, in Michigan by seven points, and has a four-point lead in Colorado. Add a win in New Hampshire—where she leads by an average of six points—and that would be enough to cement her Election Day victory.

But even if one of those states fail to pan out, Clinton still has a slight edge in Nevada, and could very well win either North Carolina or Florida (both states are toss-ups). She even has a Wednesday rally scheduled in Arizona, showing signs that they think they have a legitimate shot at getting a big enough Latino vote to win the normally Republican state. That might explain why the New York Times gives Clinton an 88 per cent shot at winning the election based on current polls.

With Clinton’s email scandal again engulfing news coverage over the weekend, the Democratic nominee was out to remind voters of Trump’s many scandals over his treatment of women. And few people represent that better than former Miss Universe Alicia Machado.

A month ago, Machado said she was done giving interviews about Trump, not long after she had come forward following the presidential debate by telling stories of Trump (then the owner of the Miss Universe pageant) fat-shaming her, dubbing her “Miss Piggy” as well as “Miss Housekeeping” because of her Latin background. Trump then openly feuded with Machado after the debates, falsely claiming there were sex tapes of her. All this was prior to the Access Hollywood tapes of Trump bragging about groping women.

But now with Trump getting some momentum in the race, Machado was back on the campaign trail to introduce Clinton at a Florida rally. If that wasn’t enough to help the message hit home, the Clinton camp has a new ad ready for the last week of campaigning:

Trump’s biggest competition to win Utah doesn’t come from Clinton, but rather third-party candidate Evan McMullin, who trails Trump by only two points in a recent Salt Lake Tribune poll. Cheering for a Trump victory, a self-described white supremacist named William Johnson paid for robocalls across the state to say that McMullin’s mother is a lesbian and question McMullin’s sexuality.

“Evan is over 40 years old, is not married and doesn’t even have a girlfriend,” Johnson says in the robocall. “I believe Evan is a closeted homosexual. Don’t vote for Evan McMullin. Vote for Donald Trump.”

This attack is consistent with @realDonaldTrump's bigoted, deceitful campaign and vision for America. Utahns won't be fooled.

Ohio’s Republican governor, John Kasich, has never been a fan of Trump. Not only did the former presidential hopeful refuse to give his endorsement to the Republican nominee, he skipped the Republican National Convention—even though it took place in Cleveland.

So who did Kasich vote for when he submitted his early ballot on Monday? Though Kasich didn’t have to disclose, a spokesperson told Cleveland.com that the governor cast his ballot for Arizona Sen. John McCain as a write-in vote. And yet, because McCain isn’t a certified write-in candidate in the state, the vote will be the same as if he left it blank—except for the symbolism behind the vote.

Meanwhile, Texas Sen. Ted Cruz—who was booed at the Republican convention when he didn’t endorse Trump (though he did at a later date)—told a Houston TV station that he voted Trump. Sorry, McCain.

A Canadian comedian and Barack Obama

As Barack Obama continues his push to get young voters to vote—and vote Clinton—the President appeared on late-night comedy show Full Frontal, hosted by the notable Canadian (and former Daily Show correspondent) Samantha Bee. It being Halloween, Obama even offered a spooky story of what happens if people don’t vote: “Donald Trump could be president.”

Recommended reading: The Republican civil war starts the day after the election (Vox)