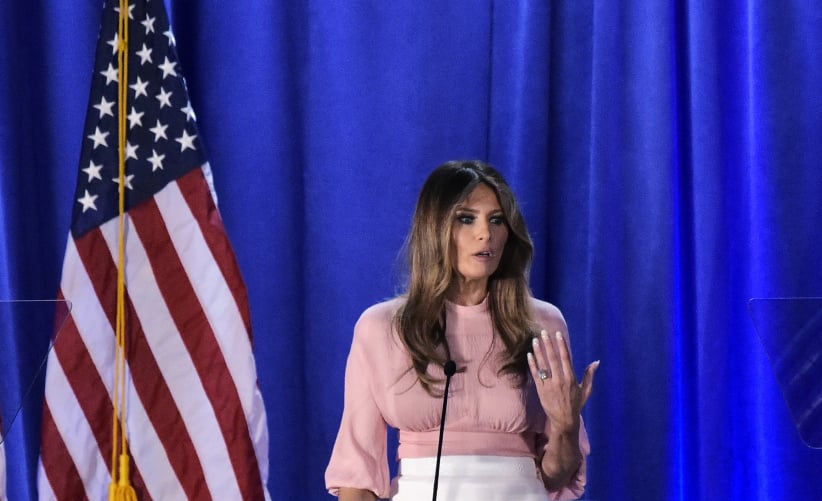 Melania Trump, the wife of Republican presidential nominee Donald Trump, speaks during a rally for her husband. (Jim Watson/AFP/Getty Images)

Nov 3, 2016: Melania Trump hasn’t delivered a public speech in months, but she appeared in Pennsylvania on Thursday to lay out her plans if she were to become first lady—namely, fight cyberbullying. The only problem is, as social media quickly pointed out, her own husband’s conduct might make for a useful starting point.

The prospect of a Slovenian-born first lady isn’t as far-fetched as many would have thought a month ago. Hillary Clinton’s “blue wall”—states that almost always vote Democrat—is starting to show some cracks, and one expert’s “crystal ball” no longer sees the Clinton landslide he predicted a month ago. That said, he still predicts she’ll beat Trump.

Melania … about that cyberbullying

But on Thursday in Pennsylvania, a state where Republicans are still hopeful they’ll pull off a long-shot win, Melania outlined her plans if she is the next first lady. Her focus? Fighting cyberbullying.

“Technology has changed our universe, but like anything that is powerful it can have a bad side,” she said. “As adults, many of us are able to handle mean words—even lies. Children and teenagers can be fragile. They hurt when they are made fun of or made to feel less in looks or intelligence. This makes their life hard and forces them to hide and retreat. Our culture has gotten too mean and too rough, especially to children and teenagers.”

It’s a noble goal. The only problem is, as many people pointed out on social media, her husband may be one of cyberbullying’s most high-profile offenders. So much so that the New York Times needed two full pages to list all the people, places and things Trump has insulted on Twitter. And that’s only since he declared his candidacy for president.

The @nytimes has published the complete list of people or things that Donald #Trump has insulted on Twitter since announcing his candidacy. pic.twitter.com/OSluZc4ErT

The crystal ball is still blue, but it’s a few shades lighter than before.

Just last month, Larry Sabato, the well-regarded political analyst of the University of Virginia with his “Sabato’s Crystal Ball,” foresaw Clinton winning more than 350 electoral votes—a landslide victory considering a candidate only needs 270 to be president. But on Thursday, Sabato revised his prediction for Clinton to a mere 293 electoral votes.

Our latest Electoral College map has Clinton up 293-214, with 31 Toss-up EVs. But is she slipping? https://t.co/taDKsxD68T pic.twitter.com/nql3FNAwUR

If that sounds like a comfortable lead for Democrats—especially considering 272 of those electoral votes are currently categorized as either “safe Democrat” or “likely Democrat.” But before Democrats get too relaxed, they should heed this warning: “In a very close or tied national race, states like Michigan, New Hampshire, Pennsylvania, Wisconsin, and others could become toss-ups too,” Sabato’s team writes.

Speaking of New Hampshire, one of those “likely Democrat” states, a new poll from Suffolk University has Clinton and Trump tied at 42 per cent apiece. Perhaps it’s no wonder Barack Obama plans to campaign in New Hampshire on the eve of the election.

Not as shy as you think

Are likely voters too shy to admit they’re voting for Trump? It’s a claim Republican insiders have made to explain that their nominee’s polling numbers aren’t representative of his true following. The data doesn’t bear it out. In a study of “shy Trump voters” from Morning Consult which analyzed how likely voters changed their support if they were asked over the phone or in a brief online interview, the results were not statistically significant showing a “shy Trump voter” effect.

Turns out Americans have no problem with saying they’re voting Trump. The only question left is: are there enough of them to beat Clinton?

She says Donald Trump raped her 22 years ago, when she was just a 13-year-old aspiring model attending a party hosted by a well-known investor. And she was about to go public with a news conference Wednesday afternoon, until she quickly called it off.

“Jane Doe has received numerous threats today,” her lawyer explained to the journalists on hand. “She has decided she is too afraid to show her face.”

While her anonymity is still largely intact, her very serious accusations—all of which have been strongly denied by Trump—are spelled out in a previous complaint.

Closing in on the checkered flag

Trump’s advertising campaign is getting a boost on the racetrack as the campaign is sponsoring NASCAR driver Reed Sorenson’s 55 car “Trump/Pence 2016” and “Make America Great Again” logos on the paint job.

It’s no doubt a unique way to advertise, but just don’t expect Sorenson to pull off the victory. He hasn’t even finished in the top 20 this year. Team Trump should hope he doesn’t crash out.

What the Chicago Cubs and presidential candidates have in common

The Chicago Cubs ended a 108-year drought when they won the World Series in the early hours of Thursday morning. Looking to jump on the bandwagon, both campaigns had something to say about the victory.

Clinton, an Illinois native, used a tweet to parallel the idea of Cubs—and perhaps herself come Election Day—making history.

They did it! 108 years later and the drought is finally over. Way to make history, @Cubs. #FlyTheW -H

But the Trump team also found some good news in the Cubs’ game seven victory to cap a series during which they trailed three games to one. On Oct. 30, the prospect of the Cubs winning three games in a row—two of them away from their home field—made them such long shots that that stats-lovers website FiveThirtyEight published a story that Trump’s campaign manager Kellyanne Conway now thinks could be a good omen.

#TBT: The Cubs Have A Smaller Chance Of Winning Than Trump Does https://t.co/krnuIyfzut