Maclean’s Bulldog, Sept. 16: Your daily rundown of what happened on the U.S. campaign trail 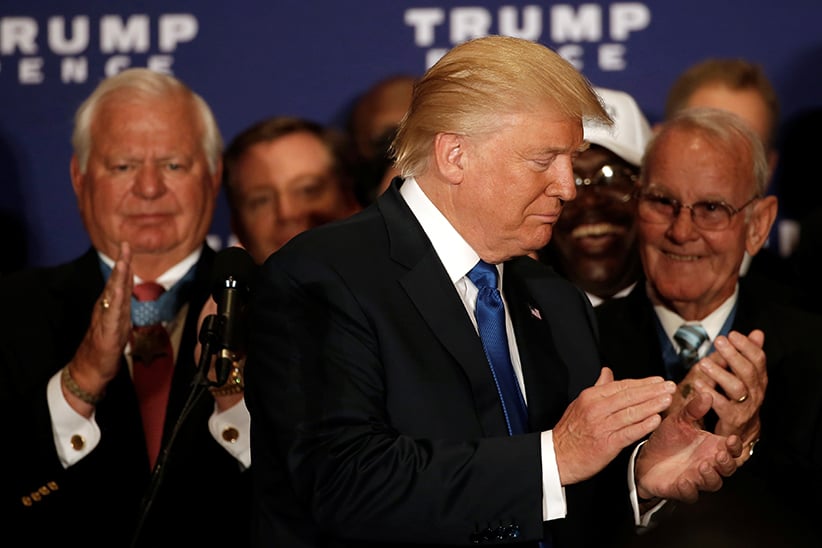 Republican presidential nominee Donald Trump walks away from the podium after stating that he believes U.S. President Barack Obama was born in the United States at a campaign event at the Trump International Hotel in Washington, D.C., U.S., September 16, 2016. (Mike Segar/Reuters)

Sept. 16, 2016: Hillary Clinton made her pitch to female voters, while her campaign laid out plans to prevent bleeding votes to a third party. Donald Trump, meanwhile, admitted that U.S. President Barack Obama, who for years Trump suggested wasn’t born on American soil, was born on American soil. “Period.”

It took some time to get here. After five years as one of the so-called “birther” movement’s leaders—and his own campaign team recently admitting Obama was born in Hawaii—Trump answered a question from the Washington Post about his own thoughts on the matter by saying he’d “answer that question at the right time. I just don’t want to answer it yet.” That was Thursday night. When asked about the issue again Friday morning on Fox, Trump refused to choose one way or the other, saying: “We have to keep the suspense going.” That “suspense” ended later in the day with a simple sentence at a press conference, which—of course—included Trump talking more about his newest hotel.

One reason for Clinton’s falling poll numbers is a lack of enthusiasm for her among young voters, a group that leans Democratic but doesn’t always go to the polls. She’ll attempt to fix this on Monday with a speech in Philadelphia aimed at the Millennial generation, where her campaign says she will “lay out the stakes of November’s election for Millennial voters.” And this weekend, in Ohio, Clinton campaign events will feature senators Bernie Sanders and Elizabeth Warren—both of whom are more popular with Millennials than Clinton.

As polls show Trump has a real chance of winning, many Republicans who opposed him have either come around or quieted down. One exception is Ohio governor and former Trump primary rival John Kasich, who boycotted the Republican convention in Cleveland. He says it’s still “very unlikely” that he would vote for Trump because there’s “too much water under the bridge” between them. Then again, he’s not ruling it out completely, and still hopes to get Republicans to the polls to vote.

Now that Clinton is back on her feet, she’s using her pneumonia diagnosis as part of a mini stand-up routine to make fans of Republicans. At a Black Women’s Agenda Symposium workshop on Friday, Clinton said: “The good news is my pneumonia finally got Republicans interested in women’s health.” What would be no laughing matter for her? A recent New York Times poll found Trump and Clinton in a virtual tie for the white female vote.

If it weren’t for Ralph Nader, a third-party candidate in the 2000 election, it’s possible there never would have been a president George W. Bush. Had the vote split differently, Al Gore may have bumped ahead in the electoral college and won the presidency. That may all be in the past, but the Clinton camp is reportedly trying to get Gore out on the campaign trail to appeal to young voters who, because of their lack of enthusiasm for Clinton, may be leaning toward third-party candidates Jill Stein and Gary Johnson.

There was talk that Johnson, the Libertarian Party nominee, would siphon votes from the Republican party, but polls have shown that, in fact, Johnson’s candidacy may hurt Clinton more—and indirectly help Trump.

Letting his hair down

Late-night TV host Jimmy Fallon is never one to turn down the opportunity to mess with Trump. So when the Republican candidate appeared on his show, Fallon said: “The next time I see you, you could be the president of the United States. I just wanted to know if there’s something that we can do that’s not presidential, really, that we can do now that we’re both civilians.”

What did he have in mind? Messing up the Donald’s hair.

Recommended reading: Pepe and the stormtroopers: How Donald Trump ushered a hateful fringe movement into the mainstream (The Economist)