Maclean’s Bulldog, Sept. 21: Your daily rundown of what happened on the U.S. campaign trail 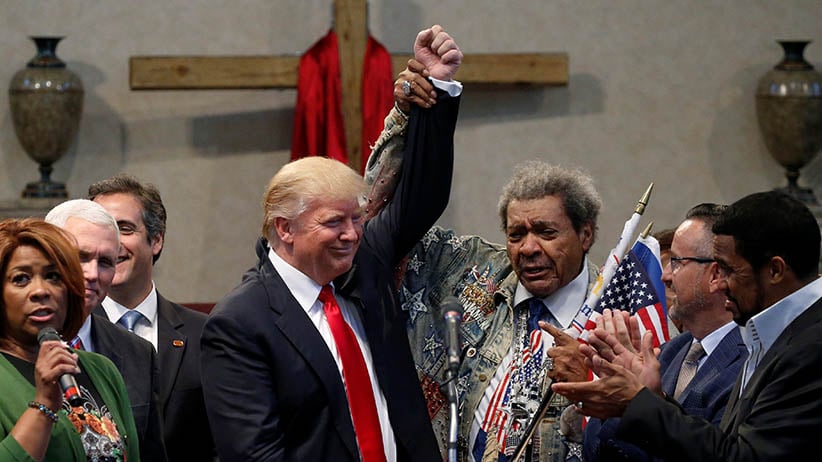 Sept. 21, 2016: Hillary Clinton talked inclusive policy for the disabled, while her campaign manager struggled to answer any questions about her boss’s policy in Syria. Donald Trump, meanwhile, expressed his support for “stop and frisk” policing tactics to address black-on-black crime, and also found some pretty vocal support from boxing promoter Don King—who may have broken a U.S. election campaign record for the amount of times someone said the N-word while introducing a presidential candidate.

All that and a “s*** ton of celebrities” made a pretty funny election advertisement.

It wasn’t the most popular answer for African-Americans in attendance at the Fox News town hall. When asked what he’d do to address violence in black communities, Trump said he’d recommend the “stop and frisk” tactic employed by some police units be adopted across the entire country. “I would do stop-and-frisk. I think you have to,” Trump said during the pre-taped interview. “We did it in New York, it worked incredibly well and you have to be proactive and, you know, you really help people sort of change their mind automatically.”

Data has shown the practice—stopping and questioning civilians before patting them down for weapons and contraband—is not all that effective and, to make matters worse, it is often criticized as a tool to disproportionally target minorities—especially black people. Trump’s trumpeting of the policy attempted to make inroads with black voters, but his remarks could have the opposite effect.

Trump has no problem settling his legal disputes with someone else’s money, it seems. A Washington Post investigation of Trump’s charity, the Donald J. Trump Foundation, found that Trump used charity dollars to settle his legal disputes. For example, when the town of Palm Beach offered to settle Trump’s unpaid fines over the height of a flag pole at Trump’s Mar-a-Lago resort, asking for a $100,000 donation to a veterans charity, Trump wrote a cheque not from his own bank account, but his charity’s account—which is pretty much entirely funded by other people’s money. Other Trump Foundation charity dollars have paid for a six-foot-tall portrait of Trump, another smaller portrait of himself, and a settlement for a lawsuit involving one his New York golf courses.

Coincidentally, soon after the article was published, Trump was talking about his plans to build safe zones in Syria using money from the Gulf States. “It’s called OPM. I do it all the time in business. It’s called other people’s money,” Trump said.

As Clinton has watched her polling numbers drop rapidly, her campaign has shifted to talking more about her policy and less about attacking Trump. With that new focus, Clinton focused her speech in Florida on Wednesday on helping disabled Americans by, for example, doing away with the sub-minimum wage—a law that allows employers to pay those with disabilities less than minimum wage—and starting a program that addresses autism in the workplace. And as a subtle reminder that Trump made fun of a disabled reporter last year, Clinton listed some of the common jobs disabled people already do around the country—including “reporting the news.”

Sometimes, talking policy doesn’t go very well when a teammate is unfamiliar with the playbook. Enter Clinton’s campaign manager, Robby Mook, who appeared on MSNBC’s Morning Joe Wednesday morning, where he was asked about how Clinton’s approach to Syria, specifically Aleppo, would differ from the Obama administration.

Mook repeated that Trump has no plan, and yet offered no specifics whatsoever on Clinton’s plan—even when asked repeatedly for any insight.

“If you don’t know the answer to that basic of a question—what is the response in Aleppo—then why do we have you here?” asked host Joe Scarborough. “I’m not being difficult. These are basic questions.”

Civil rights pioneer John Lewis spoke some harsh words in response to Trump’s speech in North Carolina, where the Republican nominee said: “We’re going to rebuild our inner cities because our African-American communities are absolutely in the worst shape they’ve ever been in before. Ever, ever, ever.”

So when Lewis, a Democrat from Georgia, was asked on Wednesday about those comments on MSNBC, he said: “I don’t know what Mr. Trump is talking about to say that the situation for African-Americans is worse than it’s ever been. Is he talking about worse than slavery? Worse than the system of segregation and racial discrimination — when we couldn’t take a seat at the lunch counter and be served? Worse than being denied the right to register to vote, to participate in the democratic process and live in certain neighbourhoods and communities?”

So maybe “ever” is the wrong word to be repeating over and over.

As he campaigns in Ohio, Trump is earning some pretty vocal support from two of the biggest talkers in American sports history. Boxing promoter Don King—he of the hair famously equally to Trump—introduced the Republican nominee at an African-American outreach event in Cleveland on Wednesday morning, saying: “We need Donald Trump, especially black people.” Conservatives were always wary of having King speak, namely because of a prior conviction for manslaughter that was later pardoned, but the free-speaking King went a bit off-script by using the N-word on multiple occasions as he introduced Trump.

Also on Wednesday, the retired college basketball coach Bobby Knight introduced Trump in Toledo. Knight, known for his many basketball championships as well as his fiery temper—notably choking his own player, throwing a chair at a referee during one game and often swearing at journalists—said of Trump: “There’s nobody that I’ve met in my lifetime that has a better grasp of how to correct mistakes.”

Fox & Not So Friendly, Please

Fox News is known for its conservative leanings, but the network’s purported objectivity faltered somewhat when Fox host Sean Hannity appeared in a pro-Trump political video advertisement over the weekend. After getting some flak, Fox News said that Hannity won’t appear in anymore Trump promotional videos—or anything of the sort—until election season ends.

When Libertarian nominee Gary Johnson was asked about rumours that his vice-presidential running mate could drop out to endorse Clinton—for fear of a Trump presidency—he had a very matter of fact response: “That is bulls***.” After a brief pause, Johnson was reminded that the interview was streaming live on Facebook.

One of the perks of being a famous movie director of films like Buffy the Vampire Slayer and The Avengers is having a bunch of celebrity friends. So with the election less than two months away, Joss Whedon directed a video for the super PAC “Save the Day” where he compiled “just a s*** ton of famous people” to urge Americans who feel their vote doesn’t matter to get out, register and vote—and preferably not for Trump.

If you don’t recognize all the names, watch the video and you’ll likely recognize the faces.