Maclean’s Bulldog, Sept. 13: Your daily rundown of what happened on the U.S. campaign trail 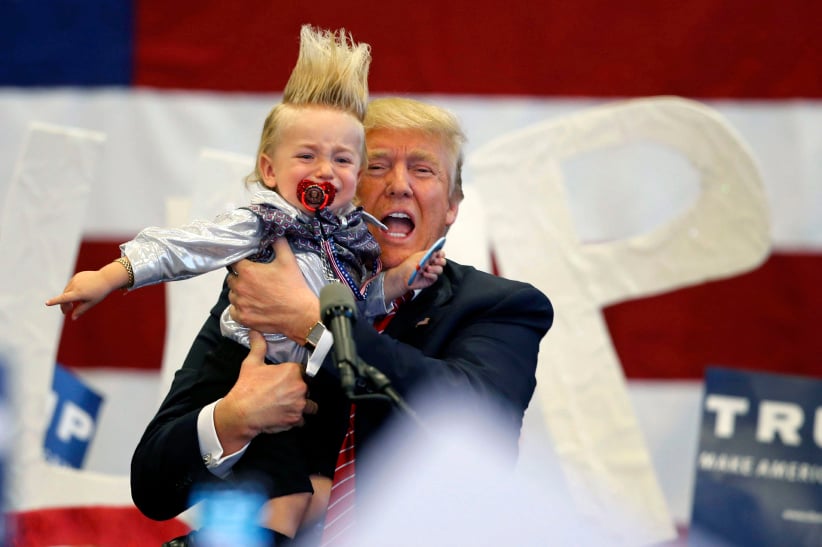 Republican presidential candidate Donald Trump holds up a child he pulled from the crowd as he arrives to speak at a campaign rally in New Orleans. (Gerald Herbert/AP)

Sept. 13, 2016: Our daily Bulldog election-campaign recaps return as the critical stretch of the U.S. election begins. On Tuesday, Donald Trump unveiled his child care policies, including six-weeks maternity leave, while his vice-presidential candidate was dogged all day for refusing to call a former KKK leader “deplorable.” A new poll shows Hillary Clinton winning among Latinos—shocking no one—but surprisingly not by as much one might think.

Be careful what you wish for

Some of Trump’s nominal supporters may be terrified of a Trump victory. Buzzfeed’s McKay Coppins spoke to Republican consultants and donors who never expected him to win, and are now frightened that Hillary Clinton might blow it. Most of them won’t allow themselves to be named in the article, and still feel obligated to not oppose their party’s nominee. But one of them said that, after Clinton’s recent missteps: “I’m curled up in the fetal position watching The West Wing and drinking a basketful of deplorable liquor.”

Trump and the working mother

Donald Trump does appear to be willing to tone himself down—when it comes to issues that are important to his daughter Ivanka. Trump’s Tuesday night speech on child care is expected to break with free-market Republicans and call for six weeks’ paid maternity leave. Not only has the speech been made with input from Ivanka, who has tried her best to portray her dad as a champion of her favourite issues, but it will be delivered in a private setting instead of a rally. It seems clear that Trump changes his style depending on who’s advising him at a given moment.

And like that, Pence’s refusal to call one of the country’s most outspoken white supremacists “deplorable” became the latest story to plague Republicans—even though he has denounced Duke repeatedly and said his team didn’t want Duke’s support. But without using the word “deplorable”, Clinton was ready to pounce.

If you won’t say the KKK is deplorable, you have no business running the country. https://t.co/mFut8Qrz9A

Tim Kaine, Clinton’s vice-presidential nominee, joined the fray on Tuesday: “If you cannot call out bigotry, if you cannot call out racism, xenophobia, if you can’t call it out and you stand back and you’re silent about it, you’re enabling it to grow.” Trump’s campaign manager, meanwhile, said Pence simply should have called Duke “deplorable” if anything to avoid the headlines.

In four battleground states—Florida, Nevada, Colorado and Arizona—Clinton is crushing Trump in polls of the Latino vote. This isn’t all that surprising, especially given that Trump has previously said the following about Mexicans:

But what is surprising is that despite Trump’s unpopularity among Hispanics, Clinton is still not polling as well as Barack Obama fared among Latino voters four years ago.

Poll: Hillary Clinton has less support among Hispanics in 4 swing states than Obama in 2012 https://t.co/3GUCwr0z8E pic.twitter.com/nxkWc17yMZ

Not much came to light during a House Oversight Committee into Clinton’s email scandal, as none of the three IT specialists involved testified. Two of them invoked their Fifth Amendment right not to testify, while the third didn’t show up despite a subpoena.

The lawyers of one specialist said in a statement that the committee, “inquiring about the same matter as the Benghazi Committee, furthers no legislative purpose and is a transparent effort to publicly harass and humiliate our client for unvarnished political purposes.”

A check-up with Dr. Oz

On his daytime TV show, Dr. Oz doesn’t ask the hard-hitting questions—at least not when the Republican nominee plans to sit down with the fellow reality TV star on Wednesday. The episode, expected to air on Thursday, will give Trump a large platform to discuss his soon-to-be-released health records and, as Oz said on Tuesday, he won’t ask Trump any “questions he doesn’t want to have answered.” Let’s just call it… doctor-patient confidentiality?

Recommended reading: Byron York on why Hillary Clinton’s “Basket of Deplorables” remark may actually be working in her favour. (Washington Examiner)